A pill with imprint 230 is identified as Bisacodyl 5 mg tablet which is yellow in color and round in shape. Supplier of this tablet is Major Pharmaceuticals Inc.

Bisacodyl is mainly indicated in the treatment of constipation. It comes under the drug class laxatives and is also used for bowel preparation.

This drug usually safe in pregnancy because there is no proven risk shown in human during pregnancy. Under the Controlled Substances Act (CSA), Bisacodyl is not labeled as a controlled substance. 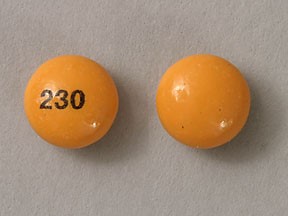 Active ingredient of 230 pills and identification

A 230 pill contains bisacodyl 5 mg as an active ingredient and is white to off-white crystalline powder. This is usually tasteless. 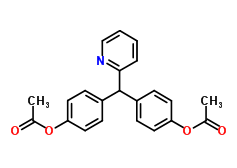 Drug class: Bisacodyl belongs to the class of organic compounds known as diphenylmethanes which contain a diphenylmethane strucuture made of a methane wherein two hydrogen atoms are replaced by two phenyl groups.

A 230 pill contains Bisacodyl which is a laxative and is mainly used to treat constipation. It is also used in:

A 230 pill contains bisacodyl 5 mg as an active ingredient. The dosage is as follows:

A 230 pill, in general, is OTC or over the counter medicine. These are the medicines which can be sold without medical prescription of a doctor. Which is completely opposite in case of the prescription drugs.

In comparison to OTC drugs, prescription drugs are sold to consumers with a valid prescription. After checking the safety and efficacy of the ingredients of the OTC medications, regulatory agencies of many countries select the OTC drugs.

What are different brand names for bisacodyl?

A 230 pill which is bisacodyl and a laxative preparation, used to treat the `constipation. It is an over the counter medication, which is used to empty and prepare the bowel for surgery or examination. The lowest price by Major Pharmaceuticals Inc for a box of 1000 tablets of bisacodyl is around $12.75.

It also acts by increasing the colonic intramural plexus. It also alters the water and electrolyte content thereby increases the intestinal fluid accumulation and laxation.

Common side effects of bisacodyl include:

Serious side effects of bisacodyl include:

Can 230 pill cause dependence?

When a person lacks sufficient fiber and liquid in his/her diet, they may start facing unhealthy bowel movements. Then they seek the stimulant laxatives in order to get relief.

Whereas some people are obsessed with weight loss and body shape and they usually have the wrong perception of having a regular bowel movement every day and they start taking laxatives.

Excessive use of laxatives such as bisacodyl and senna, in order to treat constipation and obesity, cause dependency on such medications.

After oral or rectal administration of bisacodyl, its absorption is minimal. The onset of action of this medication starts after 6 to 8 hours of taking this medication.

It causes evacuation after 6 to 8 hours approximately. It has half-life of 16 hours and therefore it is completely eliminated from our body in 3 days approximately.  It is distributed into the milk also; it has more than 99% of plasma protein binding.

The elimination half-life of bisacodyl is 16 hours which means it should be out from your system after 40 hours approximately. However, the action of bisacodyl stops after 8 to 16 hours.

Usually, a drug takes 5 times of the elimination half-life to get eliminated from your body, therefore to be very exact, after taking a dose of bisacodyl; it will take around 3 days to get out from your body.

As the medication level drops the stimulant effect will diminish. Some bulking food items like bananas, apples or pasta may help slow diarrhea naturally.

Use of 230 pill during pregnancy and breastfeeding:

Bisacodyl comes under the pregnancy category B by the USFDA. From controlled human pregnancy studies, no data is available; therefore it should be used when needed during pregnancy.