Adalimumab – Mechanism of action, uses side effects and interactions

Adalimumab is a human monoclonal antibody that works against TNF-alpha, a pro-inflammatory molecule. Therefore it is used to treat chronic inflammatory conditions such as rheumatoid arthritis, Crohn’s disease etc. It is produced by recombinant DNA technology.

Since it is a protein, it cannot be given orally because it will be denatured in the stomach. So it is only given as an injection. 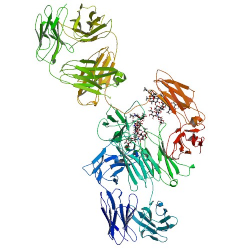 What is the mechanism of action of adalimumab?

Adalimumab binds with TNF-alpha and inhibits its binding with p55 and p75 cell surface TNF receptors. In the presence of complement, adalimumab also lyses surface TNF expressing cells. Finally, adalimumab also mediates the various biological responses that are regulated by TNF such as changes in the levels of adhesion molecules responsible for white blood cells migration. The net effect is that inflammation in the body is reduced.

What are the indications of adalimumab?

Adalimumab can be given in the following diseases:

What are the contraindications of adalimumab?

Patients treated with adalimumab are at an increased risk of developing infections. Therefore do not initiate adalimumab in patients suffering from active infections. Use adalimumab with caution in the following individuals

What are the warnings and precautions associated with the use of adalimumab?

Adalimumab is an immunosuppressive drug therefore it will predispose its user to infections. Some of these infections can be life-threatening. Similarly it can cause re-activation of tuberculosis and hepatitis B. Therefore close monitoring of the patient for these infections particularly, and for all infections generally is needed.

All users should be warned about the possibility of developing cancer.

Autoantibodies develop in 3% to 26% of the people using adalimumab. The clinical consequence of developing these antibodies is variable. In some individuals these new antibodies do not cause any harm. However in some rare cases lupus-like syndrome develops. In such patients positive ANA titers might also be positive.

Aplastic anemia and blood dyscrasias have been noted with the use of adalimumab. Advise the patient to immediately report to the hospital if he has persistent fever, bruising, bleeding or pallor. 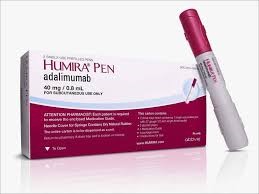 What is the drug Humira used for?

Absorption: After subcutaneous injection, the time to reach maximum plasma concentration was variable and ranged from 75 hours to 187 hours. The bioavailability of the drug is 64%.

Distribution: The volume of distribution of adalimumab ranges from 4.7 to 6.0 l. The amount of drug that reaches the synovial fluid is variable and ranges from 31% to 96% of the plasma drug concentration.

Clearance and half-life: The clearance of adalimumab is increased when anti-adalimumab antibodies are present and it is decreased with increasing age in patients aged 40 to >75 years. The half-life of adalimumab ranges from 10 to 20 days.

How is adalimumab stored?

Optimum temperature for storage of adalimumab ranges from 2°C to 8°C (36°F to 46°F) and do not freeze it. Store it in its original containers to protect it from sunlight. If it is stored at room temperature use it within 14 days. Failure to use it in that time period warrants that it be discarded.

Side effects of adalimumab

The following side effects have been seen with adalimumab

The recommended dosage of adalimumab in various diseases is as follows:

Results from noncontrolled data show that adalimumab is effective in treating uveitis in children and adolescents. However, no prospective controlled clinical trials have been performed. Adalimumab has several safety concerns, including a black box warning regarding serious infections and lymphomas.

Further data are needed to establish the efficacy, safety, optimal dosage, and length of adalimumab therapy in the treatment of uveitis in children. An expert review panel recommends adalimumab as a third-line treatment option in children with noninfectious uveitis.

Adalimumab is one of the most expensive drugs around. The average retail price of 2 pens of 40 mg (0.8ml) adalimumab is $5,384. GoodRx, the online retail pharmacy, offers a discount of 9% and it is available for $4,846 from there.

Can I take adalimumab if I am pregnant?

Adalimumab actively crosses the placenta, especially in the third trimester. This raises the possibility of suppression of immune system of the baby, meaning that the newborn would be at a higher risk of developing infections than other babies. Another problem in such newborns and infants is that whether vaccination should be carried out or not.

Although this study suggests that there is no added risk to the mother or fetus due to adalimumab, more research needs to be carried out to confirm this conclusion. Till then use of adalimumab during pregnancy should be judicious and on physician’s discretion.

Can I take adalimumab if I am breastfeeding?

The amount of adalimumab that is present in breast milk is small and ranges from 0.1% to 1%. Although there are no reports of side effects of adalimumab on the baby or on milk production, but still no clear cut go-ahead has been given to continue to breast feed the baby while taking adalimumab.

Therefore a physician should consider the developmental and health benefits of breastfeeding to the baby along with the mother’s clinical need and possible side effects before making a final decision.

Is adalimumab safe for children?

Safety and efficacy of adalimumab was carried out in children suffering from juvenile rheumatoid arthritis and juvenile Crohn’s disease. It was found that the drug had equal efficacy in children when compared with the efficacy in adults. The safety of the drug was also comparable in the two age groups however the profile of adverse effects was different in children.

Is adalimumab safe for elderly?

Therefore use of adalimumab in the elderly still remains a gray area and can only be decided after weighing the pros against the cons. Dose adjustment may also be needed in the elderly as its clearance is reduced in this age group due to decreased kidney function.

Does adalimumab cause infertility?

There is very little data available on the effect of adalimumab on the fertility of both males and females. The data available for other anti-TNF drugs suggests that anti-TNF agents do not cause infertility nor do they affect the outcome of pregnancy.

However since these drugs were made commercial only at the end of last century, and because their use is still limited, avoid the aggressive use of adalimumab in individuals wishing to preserve their fertility.

Can adalimumab cause cancer?

Every day a number of mutations occur in our cells, however our healthy immune system kills these mutated cells. Therefore if we suppress our immune system, the probability of developing cancer raises by many folds. The most common type of malignancies reported were lymphomas (both Hodgkin’s and non-Hodgkin’s lymphoma) and leukemia’s. The most common type of solid tumors were cancers of breast, colon, prostate, lung, and melanoma.

What are some drugs that can interact with adalimumab?

Adalimumab reacts with a number of drugs. Some of the drugs having a major interaction with adalimumab are:

How long does adalimumab stay in your system?

The half-life of adalimumab is very long and ranges from 10 days to 20 days. Normally, 5.5 half-lives are needed to remove a drug from the body. Therefore adalimumab will be completely removed from an individual’s system after 55 days to 110 days. Presence or absence of other factors such as kidney function, age, concomitant use of methotrexate will also affect the half-life of adalimumab and may increase the duration that this drug stays in our system.

“What is the use of Ubiquinone?“