What is Ascorbic Acid?

Vitamin C, chemically known as ascorbic acid or L-ascorbic acid, is a vitamin compound found in food and used as a dietary supplement. Vitamin C is powerful antioxidant that protects body against oxidative stress. It is also very effective for common cold symptoms, but is also needed for better minerals absorption. Foods that contain highest amounts vitamin C include citrus fruit, tomatoes, and potatoes.

Acerola plant is one of the richest source of Vitamin C. 100 g of fresh acerola fruit contains 1000 – 4500 mg  vitamin C. As a supplement, ascorbic acid is used for either prevention or treatment of Vitamin C deficiency in patients who don’t get adequate amounts of this vitamin from their diets. However, most people who have normal diet do not need extra Vitamin C.

What is Calcium ascorbate?

Calcium ascorbate is a form of vitamin C that is also used to prevent or treat deficiency of vitamin C in patients who do not take enough of the vitamin from their diets. This product also contains calcium. When ingested, Calcium Ascorbate is hydrolyzed in the stomach giving calcium and ascorbate ions. The stomach hydrochlorid acid then converts this ascorbate ion into ascorbic acid. According to this there is no net increase in the acid concentration of the stomach.

If you eat at least five fruits servings or vegetables a day, you will for certainly take recommended amount of dietary vitamin C, usually in the form of ascorbic acid. Women need 75 mg of vitamin C per day, and men need 90 mg.  Doctor can advise you on whether you should take vitamin C supplements, and if so, which type would be best for you.

Low levels of this vitamin may cause condition known as scurvy. Scurvy may cause symptoms such as muscle weakness, rash, joint pain, tiredness, or tooth loss.

Symptoms of mild Vitamin C deficiency may include gingivitis, inappropriate development of bone and tooth, bleeding gums, and teeth loos. Febrile states, chronic illness, and infection increases the need for ascorbic acid. Delayed fracture, hemovascular disorders, burns and wound healing are indications for an increase daily intake of this vitamin.

Diabetics, patients with undergoing stool occult blood tests, patients prone to recurrent renal calculi and those on natrium restricted diets or anticoagulant therapy should not take excessive doses of ascorbic acid during extended period of time. 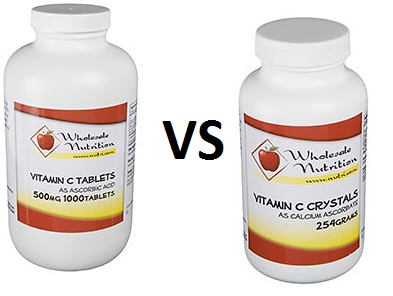 According to the Office of Dietary Supplements, Ascorbic acid supplements are absorbed almost equally as the ascorbic acid that is present in foods naturally. Both the calcium and ascorbic acid are well absorbed from calcium ascorbate.

In rare cases ascorbic acid supplements may cause you to experience side effects, such as upset stomach, heartburn or diarrhea, then calcium ascorbate may be a better option because the calcium works as an acid buffer.

However, more relevant evidences are needed to prove that this form reduces side effects. Also, very important is that calcium ascorbate replenishes the calcium that is excreted in urine as it contains chelating properties of Vitamin C.

Tolerable upper intake level for calcium ascorbate supplements is 2,500 mg/per day with taking into account the other foods and supplements you are consuming. Patients should avoid consuming more ascorbic acid in more than the tolerable upper intake level of 2,000 mg per day unless doctor say otherwise. Adverse effect including stomach cramps, diarrhea, nausea and a reduction in the absorption of vitamin B-12 and copper can be caused.

Patients with diagnosed hemochromatosis, should avoid vitamin C supplements as they can increases iron absorption. In addition, high ascorbic acid intake may increase blood sugar levels and risk of heart diseases in diabetics.

Ascorbic acid may also interact with following drugs: NSAIDs, antacids, blood thinners, tetracyclines, chemotherapy drugs and protease inhibitors. Thus calcium-ascorbed is may be considered as safer supplement in such cases.

As a neutral salt, calcium ascorbate has natural gentleness with numerous advantages as a source of vitamin C and calcium. It is gentle to the stomach and helps replacing calcium that vitamin c might remove from the system. Calcium ascorbate is recommended for athletes and the elderly but also for those who wants to strengthen their muscle and bones and to reduce aging process.

Vitamin C during pregnancy and breastfeeding

Ascorbic acid has been assigned to pregnancy category A by the FDA pregnancy list of drugs when used in doses that are FDA allowed, meaning that there were no risk in controlled human studies.

Adequate and well-controlled human studies have failed to demonstrate a risk to the fetus in the first trimester of pregnancy . Doses of Vitamin C exceeding the recommended dietary allowance (RDA) have been assigned to pregnancy category C, as animal studies have not been reported and there are no controlled studies in human pregnancy.

Ascorbic acid is only recommended for use during pregnancy when benefit outweighs risk. However, it has been shown that high doses of Vitamin C taken during pregnancy may cause conditional scurvy in infants following birth.

Ascorbic acid can pass into human breast milk. However, the effects in the nursing infant are unknown. The manufacturer recommends that caution should be always used when administering ascorbic acid to nursing women.