Aniracetam is a synthetic pharmaceutical drug that is used to improve or enhance the mental performance such as memory, learning capacity, attention and alertness.

The drug is known as ampakinenootropic drug that is principally used for the treatment of Central Nervous System disorders. The drug Aniracetam is commercially available under generic name Aniracetam and marketed under several brand names such as Ampamet, Aniracetam-Sanhome, Memodrin, Referan, Pergamid, Draganon, Sarpul and many others worldwide.

The drug Aniracetam is also recommended for the treatment of behavioral and psychological symptoms of dementia, Alzheimer’s disease and Parkinson’s disease. Chemically, Aniracetam is belongs to a class of compound known as benzamides and named as  N-anisoyl-2-pyrrolidinone or 1-(4-methoxybenzoyl) pyrrolidin-2-one.

The Aniracetam is available as tablet or granules and powder form for oral administration through mouth. The tablet is swallowed as a whole and granules mixed in water and then swallowed. The drug is usually recommended two to three times a day and at least 15 minutes after meals.

Piracetam is a nootropic drug or smart drug i.e. Substances that primarily acts on the brain or nervous system. The drug is used to improve cognitive functions such as perception, reasoning, attention, learning, memory and intelligence.

Besides this the drug is also used in combination with other medications to treat dementia or cognitive problems, depression , anxiety and movement disorder known as Cortical Myocolonus, a medical condition characterized by jerky muscles movements.

The drug Piracetam is supposed to protect cerebral cortex (area of brain that is responsible for thought, perception, movement and recognition) against a lack of oxygen.

Chemically the drug is belonging to racetams group and known as 2-oxo-1-pyrrolidine acetamide. It is a cyclic derivative of GABA and shares the 2-oxo-pyrrolidone base structure with pyroglutamic acid.

In United States, Piracetam is allowed to be sold for medical purpose only and not as dietary supplements. The drug was originally discovered in 1964 by Belgian pharmaceutical company USB laboratories.

The medication is supplied as a tablet or granules/powder form for oral administration. The tablet is swallowed as a whole and granules mixed in water and then swallowed. The drug is usually recommended two to three times a day and at least 15 minutes after meals.

How Aniracetam and Piracetam works

The mode of action of Aniracetam is not fully understood but several theories have been put forth regarding the mechanism of action of the drug. These include glutamatergic, serotonergic, dopaminergic, cholinergic, and indirect adrenergic effects etc.

Nicotinic Cholinergic Receptors: Like other racetams, Aniracetam acts as a positive modulator of Nicotinic receptors involved in interaction with neurotransmitter acetylcholine. The drug also increases the release of acetylcholine from the brain hippocampus resulting in elevating the cholinergic neurotransmission.

AMPA Glutamatergic Receptors: Aniracetam is a positive modulator of AMPA (alpha-amino-3-hydroxy-5-methylisoxazole-4-propionic acid) receptors responsible for the neurotransmission of glutamate (most common neurotransmitter in the brain). Aniracetam acts by binding to the non-active site of the AMPA receptor and modifies it resulting in reduced rate of desensitization thereby causing enhanced activation in presence of positive stimuli including glutamate. These receptors play important role in memory and are responsible for fast transmission at the synapses in the central nervous system.

GABAergic Receptors: Aniracetam increases the effects of GABAergic inhibition. GABA is responsible for the cognition (thinking) and emotional wellbeing, and improvement in the GABA function may serve in treating anxiety and cognitive disease.

Dopaminergic Receptors: Aniracetam causes reduction in anxiety and enhances socialization via interaction with dopamine receptors. The drug results in an increase in the release of dopamine and acts to improve mood and judgement.

Adrenergic Receptors: Binding of Aniracetam to AMPA receptors causes enhanced release of noradrenaline from neurons. This brings about slight stimulatory effect on the central nervous system.

However, among the proposed mechanisms of action Piracetam is thought to exert its effect on central nervous system efficiency of cholinergic neurotransmission. 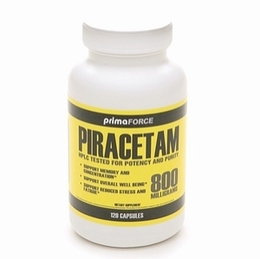 Can both Aniracetam and Piracetam be taken together in combination

Mixing Piracetam and Aniracetam: Yes, both the drugs can be taken together in combination. Aniracetam and Piracetam are routinely used to treat medical conditions related to  dementia, Alzheimer’s, and other trauma to the brain with great efficacy.

Aniracetam Piracetam can be taken as stack that provides additional benefits as compared to taking Aniracetam Piracetam individually. Literature studies with racetam class of drugs have suggested that these drugs were routinely used in combination to increase their impact on cognitive enhancement.

In clinical studies, it has been observed that Aniracetam Piracetam combination increase the potent ability of each other. However, combination therapy required professional supervision and dose adjustment for better and desired results.

Both Aniracetam and Piracetam acts on brain and improve memory, perception, reasoning, attention, learning and intelligence. Despite this, when comparing Aniracetam vs. Piracetam, it has been observed that Aniracetam is more potent then Piracetam in improving concentration, anxiety, fear, depression and attentiveness. The recommended dose of Aniracetam (750-4500 mg) is usually less then Piracetam (1.5 – 6.5 gm).