Home » Drug Interactions » Can Azithromycin be used in combination of Rifampin

Can Azithromycin be used in combination of Rifampin

The drug is available under generic name Azithromycin and marketed under the various brand names such as Zithromax, Azithrocin and Azyth. Pfizer is accountable for the manufacturing and marketing of Azithromycin.

Furthermore, Azithromycin is marketed as an ophthalmic solution under the brand name AzaSite by Inspire Pharmaceuticals. Azithromycin is a semi-synthetic, relatively broad spectrum, macrolide antibiotic.

Azithromycin plays a key role in the treatment of complication related to the bacterial infections such bronchitis, pneumonia, skin infections and infections of ear and throat.

It is also recommended to treat the sexually transmitted diseases and urinary tract infections. It is also used to prevent or treat the disseminated Mycobacterium avium complex (MAC) infection.

Azithromycin (in form of ophthalmic solution) is used to treat bacterial conjunctivitis (a bacterial eye infection).  The drug is also prescribed for the treatment of acute bacterial sinusitis caused by H. Influenza, M. Catarrhalis or S, pneumonia.

Sometime it is also used to treat the infection of H. pylori and Legionnaires’ disease (inflammatory lung infection caused by Legionella). It is also prescribed for the treatment of Whooping cough.

Azithromycin is a derivatives of erythromycin and available as a dihydrate salt. It is a semi-synthetic aliphatic heteromonocyclic antimicrobial agent with a molecular formula C38H72N2O12. 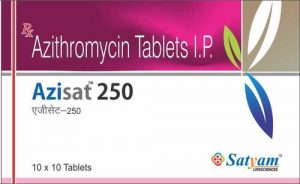 Rifampin belongs to the class of medications called antimycobacterials. It acts against a broad spectrum of bacteria including several forms of Mycobacterium. It is not effective against viral infections (e.g., common cold, flu).

Rifampin is a semisynthetic antibiotic that is produced from Streptomyces mediterranei. The drug is on the World Health Organization’s List of Essential Medicines, i.e., it is one of the most important medications needed in a basic health system.

The drug is available under generic name Rifampin and brand names Rifadin, Rimactane. Sanofi pharmaceutical company is responsible for its manufacture. Rifampin is a semisynthetic antibiotic derivative of rifamycin SV with a chemical formula C43H58N4O12.

Rifampin is recommended in combination with other antituberculosis medications for the treatment of all forms of tuberculosis, including tuberculous meningitis.

Rifampin is used for the treatment of asymptomatic carriers of Neisseria meningitidis to eliminate meningococci from the nasopharynx but is not effective in cases where patients have developed the symptoms of meningitis.

Rifampin is used as a combination therapy for the treatment of leprosy (Hansen’s disease) and certain atypical (nontuberculous) mycobacterial infections, such as those caused by Mycobacterium avium complex (MAC).

Rifampin co-administered with other antistaphylococcal agents is also recommended in the treatment of serious infections brought about by Staphylococcus species (including methicillin- and multiresistant strains).

Rifampin is also indicated in the prophylactic treatment for intimate contacts of young children who develop infections with Haemophilus influenzae type b. the drug is a prescription drug and is to be taken on an empty stomach, either 1 hour before or 2 hours after food. It is taken orally with a glass of water. The drug is supplied as capsules or injections.

Rifampin capsules are available in two different dosage forms of 150 mg or 300 mg for oral administration and contain Rifampin as the active ingredient. Rifampin for injection is available in glass vials containing 600 mg Rifampin.

How Azithromycin and Rifampin work?

Azithromycin is a macrolides antibiotic (such as Erythromycin and Carbomycin) which acts by inhibiting the bacterial protein synthesis, quorum-sensing and formation of bacterial biofilm.

It has been observed that Azithromycin binds with the 50S subunit of ribosome and interferes with polypeptide synthesis. Therefore, it is predicted that stimulated dissociation of peptidyl-tRNA from ribosome is the major mechanism of action of Azithromycin.

Azithromycin competes for [14C] erythromycin ribosome binding site, suggesting that it binds to the same receptor as erythromycin. However, it does not affect the synthesis of nucleic acid.

The Azithromycin accumulates at very higher concentration in cells, predominantly in phagocytes and therefore delivered effectively in high concentrations to sites of infection.

Rifampin (a semisynthetic antibiotic) acts through inhibition of DNA-dependent RNA polymerase of mycobacteria and other microorganisms thereby forming a stable drug-enzyme complex.

The complex leads to suppression of initiation of chain formation in RNA synthesis but does not affect chain elongation. Although Rifampin binds to the holoenzyme but the site of action of the drug is the beta subunit of the enzyme.

Rifampin does not bind to the nuclear RNA polymerase from a variety of eukaryotic cells and hence, do not affect protein synthesis. Rifampin also inhibits RNA synthesis in mammalian mitochondria but at a considerable higher concentrations than that required for the inhibition of the bacterial enzyme.

High concentrations of the drug can also inhibit viral DNA-dependent RNA polymerases and reverse transcriptases. Rifampin is effective against both intracellular and extracellular microorganisms. 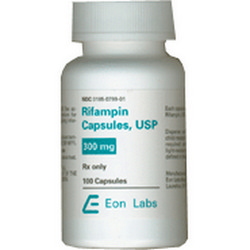 Can both Azithromycin and Rifampin be taken together in combination?

Yes, both the drugs can be taken together in combination. Clinical studies indicate the safety and efficacy of using the combination of the drugs in a variety of diseased states.

Azithromycin and Rifampin combination therapy is very effective for the treatment of chronic chlamydia-induced reactive arthritis, also known as Reiter’s syndrome (type of arthritis occurring due to a reaction to an infection elsewhere in the body) that is characterized by inflammation of the tendons, joints, urogenital tract, and eyes.

Azithromycin plus Rifampin drugs combination is beneficial and provides favorable effects in the chronic course of C. pneumoniae pneumonitis.

Animal studies indicate that the combination of Azithromycin and Rifampin produce higher rates of eradication of C. pneumoniae from lung tissues in comparison to Azithromycin alone.

Macrolides (Clarithromycin or Azithromycin), Ethambutol, and Rifamycins (rifampin, rifabutin) combination provide a therapeutic regime for the treatment of Mycobacterium avium complex (MAC) that is intrinsically resistant to many antibiotics and antituberculosis drugs.

Studies also indicate that Rifampin along with Azithromycin and Clarithromycin may play important role in the treatment of Staphylococcus aureus osteomyelitis in humans.

The recommended treatment of bartonella include the combination of  Azithromycin or Doxycycline with Rifampin, Clarithromycin or a Fluoroquinolone for at least 4-6 weeks.

“Itraconazole oral and Simvastatin oral Drug Interactions“
“Can I take Simvastatin with Metformin?“