Chemically citalopram is (RS)-1-[3-(Dimethylamino)propyl]-1-(4-fluorophenyl)-1,3-dihydrobenzofuran-5-carbonitrile and its molar mass is 342.392gm/mol.

Citalopram was first synthesized by group of scientist at pharmaceutical company Lundbech in 1972 and it was first marketed in Denmark in 1989. After 9 years it was introduced to United States market in 1998 under the brand name Celexa. It is used to treat depression.

The brands names under which Citalopram is sold are Celexa, Cipramil, Akarin etc.  The preferred route of administration is oral route. The general dosage form for citalopram is tablets, film coated tablets and oral drops solution and different strengths of citalopram tablets are available i.e. 10mg, 20mg and 40mg. 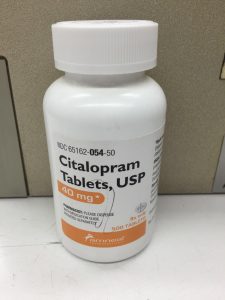 How does citalopram works in body

As it is known as Antidepressant drug included in Selective Serotonin Re-uptake Inhibitor class, the mechanism of action is based on the reuptake inhibition of serotonin(5-HT) by neurons.

It has been found that citalopram blocks the reuptake of serotonin pump in the CNS. Citalopram is found as an racemic mixture of (R) and (S) enantiomer and the activity of inhibition of 5-HT reuptake by citalopram is mainly due to (S)-enantiomer.

SSRIs significantly have less affinity for receptors like histamine, dopamine (D1 & D2), adrenergic, muscarinic and cholinergic. This antagonism sometimes may be associated with sedative, cardiovascular and anticholinergic effects of other psychotropic drugs.

Citalopram should be taken strictly as directed by the doctor. But as it is an antidepressant drug it has major side effect of drowsiness, sedation and blurred vision.

Therefore, according to my opinion it should be taken at bedtime such that this major side effects does not hamper daily activities of patient. The direction to use citalopram should be strictly followed as directed by the doctor as they are the ones who know their patients well.

What does citalopram do to your body

Pharmacokinetic of citalopram is divided in different parts: absorption, metabolism, distribution and excretion

Absorption: As it is orally administered, it is rapidly and well absorbed from the GI tract. The peak plasma concentration is achieved within 4 hour of administration of citalopram dose. Bioavailability is 80% following the oral administration. The absorption of drug in GI tract is not affected by food.

Distribution: Citalopram is highly lipophilic and is well distributed throughout the body, it also cross the blood-brain-barrier. However, its metabolite called demethylcitalopram does not cross the blood brain barrier. They are 80% bound to plasma proteins.

Elimination: The major route of elimination or excretion is in urine and feces. In urine about 12-23% of an oral dose of citalopram is recovered unchanged in urine and about 10% of citalopram dose is found to be excreted in faeces. Half-life of citalopram is found to be 35hours. Half-life of a drug can be defined as when the drug concentration reduces to its half the original concentration. Systemic clearance also plays a vital role on excretion of citalpram which is about 330ml/min, with approximately 20% of that due to renal clearance.

Dose of citalopram in depression

Treatment of depression is divided into initial dose and maintenance dose of citalopram.

Usual Adult Dose: Initial dose: starting with 20mg orally, once a day maintenance dose: 20 to 40mg/day. The initial dose is extended with addition of 20mg to the initial dose with maximum of 40mg per day.

Paediatric dose: above the age of 60 years the maximum recommended dose is 20mg/day.

Geriatric dose: The age factor is multiply divided in child and dose is strictly followed to avoid accidents.

Children up to 11years of age: Initially 10mg/day, maximum 20-40mg/day in divided doses increasing with 5mg/week for 2 weeks.

Children between 12 to 18 years: Initially 20mg/day, maximum 20-40mg/day in divided doses increasing with 1omg/week for 2 weeks.

Side effects of citalopram

Side effects may range from mild, moderate to severe. The emergency to seek medical help depends on the severity of side effect. In case of an allergic reaction to citalopram like skin rash or hives, difficulty breathing, swelling of your lips, face, tongue, or throat.

Common citalopram side effects may include;

In case of emergency seek medical help or call 9-1-1.

Can patients take Citalopram with Levothyroxine

Thus leading to dose adjustment for levothyroxine is necessary to maintain the required therapeutic effect of a hormone replacement therapy for thyroxine hormone. Even being apart in the classes of drugs citalopram interferes with the absorption of levothyroxine.

However, the unusual direction of medication of levothyroxine is in the morning with empty stomach and that for citalopram is at night or bedtime as the major side effects are drowsiness, sedation, blurred vision, etc. and even the labels on medication provided by the pharmacy says that do not drive if drowsy.

“Folic acid and Synthroid Drug Interactions”
“Is is safe to take both Levothyroxine and Amoxicillin together?”
“How long does alcohol stay in your blood”