It is used as a pain reliever for various conditions such as: headaches, dental pain, muscle pain, tendinitis (inflammation or irritation of a tendon, a thick cord that attaches bone to muscle), menstrual cramps, and for the treatment of pain, swelling and joint stiffness caused by arthritis, osteoarthritis, juvenile arthritis, bursitis, ankylosing spondylitis and gout.

It can also be used to temporarily reduce fever and for the treatment of common cold symptoms.

Vicodin is a Brand named for opioid pain reliever tablets that contains a combination of two active substances – hydrocodone and acetaminophen (paracetamol). 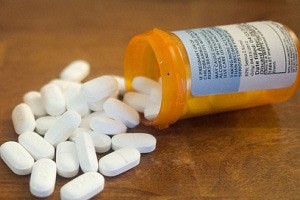 Mechanisms of action – How Advil and Vicodin work in the body?

COX-1-dependent prostaglandins play a crucial homeostatic role in physiological functions (gastrointestinal cytoprotection, aggregation of platelets and modulation of vascular muscle tone) while COX-2-dependent prostaglandins play dominant roles in pathophysiologic processes (inflammation and cancer, or physiological processes such as endothelial vasoprotection). If NSAID drug less inhibits the COX-1, less side effect would be caused.

Hydrocodone decreases synaptic chemical transmission in the CNS, which in turn inhibits pain sensation into the higher centers of the brain.

Acetaminophen is a mild non-NSAID analgesic that inhibits prostaglandin synthesis through the inhibition of cyclooxygenase – COX (a highly selective COX- 2 inhibitor).

It also acts on the hypothalamic heat regulating centers to produce antipyresis. Acetaminophen’s reactive metabolite N-acetyl-p-benzoquinone imine (NAPQI) can cause a potentially fatal, hepatic necrosis through the process of lipid peroxidation if acetaminophen is overdosed (more than 4g daily).

Can patients take Advil and Vicodin together?

From a pharmacology standpoint, there is no harm if ibuprofen is taken together with hydrocodone and acetaminophen, so if Vicodin isn’t controlling the pain, patients can use Advil and Vicodin together.

However, patients may take them together only with physician instructions. Ibuprofen is a blood thinner and may cause bleeding in predisposed patients, so if patient is already taking Vicodin for the treatment of post-surgical pain, in that case, Advil and Vicodin shouldn’t be used together.

There are also many other factors that can exclude the usage of Advil and Vicodin combination such as: age, past medical history, pregnancy and breast-feeding, and possible interactions with other medications, food or alcohol.

Vicodin can interrupt breathing and high doses may lead to fatal respiratory depression.

Acetaminophen and ibuprofen are both COX inhibitors. If these drug are taken together their effects will become additive, so there is a higher probability of causing adverse effects especially in predisposed individuals.

The table below shows the incidence of side effects after Advil or Vicodin administration in recommendable doses. This Incidence can be significantly increased if these drugs are overdosed or if they are taken together.

Special precautions and warnings during Advil and Vicodin administration:

“Can you take Tylenol and NyQuil together“