Levothyroxine is basically an human made or synthetic hormone for treatment of endocrine disorder and replacement therapy of principle thyroid hormone thyroxine (T4) that is made and released by thyroid gland located in the neck region.

In newborn and fetus it is important for the growth and development of cells including bones and brain and in adult, thyroid hormone helps to maintain brain functions , utilization of food and body temperature.

The drug is presribed for the treatment of hypothyroidism (low thyroid hormone release) and also used for the diseases treatment called goiter ( enlarged thyroid gland) which is caused by the hormone imbalances in the body.

The drug is marketed and available under the brand name of synthroid,  levothroid, levoxyl, tirosint and unithroid. The drug was first isolated in the pure form in 1914 at the mayo clinic by edward calwin kendall from extracts of hog thyroid gland and the hormone was synthesized by british chemist in 1927.

Levothyroxine is the second most prescribed drug in United States. The drug levothyroxine sodium is available in various dosage from i.e tablet, an intramuscular injection and as a solution for intravenous infusion.

The recomended dose of drug is 12.5mcg to 25mcg with gradual dose increment at 4 to 6 weeks intervals untill the patient achieves clinically euthyroid and normalized serum TSH levels. However, the dose varies from the type and severity of the conditions. 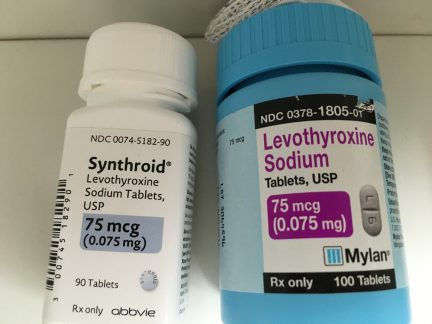 calcium is a mineral and is present in more amount than any other mineral. About 99% of the calcium is stored in teeths and bones, although it is present in the muscles,blood and the fluid present between the cells.

Calcium is essential mineral for building and maintaining bones and is also necessary for various other functions such as contraction and relaxation of blood vessels and muscles, the secretion of hormones and enzyme and nerve impulse transmission throughout the nervous system.

The calcium compounds are available in various dosage forms such as oral tablets, oral powder, oral capsule, oral suspension, chewable and compounding powder. The recomended dose for calcium is 900 to 2500mg/day and it varies from the type and condition of patient.

How does levothyroxine and calcium works in the body

The released thyroxine is Tetra iodinated tyrosine (T4) and in kidney and liver it is converted into (T3) triodotyrosine which is the active form. In order to increase the solubility of thyroxine hormone it binds to thyroid hormone binding proteins i.e.

Thyroxine binding globulin and thyroxine binding prealbumin and thus the transport and binding of major thyroid hormone takes place in the nucleus and cytoplasm in the body. Thus it acts as an hormone replacement therapy and normalize the deficiency symptoms.

calcium and calcium compounds are used for the calcium supplementation when calcium deficiency is observed in an individual . Calcium plays vital role in formation and maintanance of the bones.

It is also useful as it binds with other minerals like phosphate, etc and aid their excretion or removal from the body. Acting as an antacid is its secondary action neutralizing stomach acids. Simply it acts as an external calcium supplement for the body deficient to calcium.

Can patients take levothyroxine and calcium together

Most importantly doctor should be informed of all the medication an patient is taking such that any further drug-drug interaction could be avoided and pateint gets proper relief from symtoms.

Different activity profile of levothyroxine when co-administered with other drugs:

levothyroxine as an active ingredient has broad category of adverse reaction. They are:

“Can you take Oxycontin with Lyrica?“