What type of drug is Metformin

Metformin is a Generic name for a drug with antihyperglycemic properties that is used for treating non – insulin – dependent diabetes mellitus.

Therapy with metformin may also decrease the risk of having a stroke, heart attack, or other diabetes-related complications. Metformin can induce weight loss and that’s why it is the drug of choice for obese patients with diabetes type two.

When it is used alone, this drug doesn’t cause hypoglycemia as side effect; but, it may potentiate the hypoglycemic effects of sulfonylureas drugs and insulin if they are used together. Metformin is available in the form of tablet in following dosage forms: 500, 750, 850 and 1000 mg. It is usually taken during meals.

Januvia is a Brand name for a drug containing sitagliptin as an active ingredient. It is an oral diabetes drug that is used to control sugar levels in blood. Januvia works by regulating insulin levels that body produces after eating.

This drug is used for the treatment of patints with type 2 diabetes. Januvia can be used in combination with other diabetes medicines, but is not used for treating type 1- diabetes.

Patients with diabetic ketoacidosis should not use Januvia. Januvia is available in tablet and film-coated tablet form in following strenghts: 25, 50 and 100 mg.

Common Brand names on the market containing sitagliptin as an active ingredient are: Xelevia and Janumet. 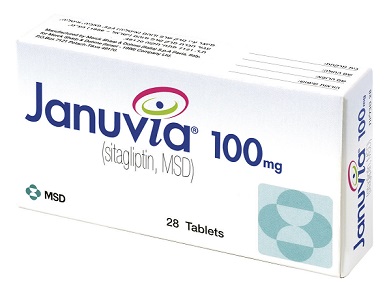 How does Metformin and Januvia work in the body

Incretin hormones are glucagon-like peptide-1 (GLP-1) and glucose-dependent insulinotropic polypeptide (GIP). They are released by the intestine during the day and levels are increased in response to a meal.

These hormones are rapidly inactivated by the enzyme, DPP-4. When glucose concentrations in blood are normal or elevated, GIP and GLP-1 increase synthesis of insulin and its release from pancreatic beta cells through intracellular signaling pathways involving cyclic AMP.

GLP-1 can also lower secretion of glucagon from pancreatic alpha cells that lead to reduced production of glucose in the liver. These changes lead to a decrease in hemoglobin A1c (HbA1c) levels, as well as a lower fasting and postprandial glucose levels in blood.

The main benefit of this drug is reduced side-effects of hypoglycemia in the management of glucose levels in blood.

Can patients take Metformin and Januvia together

Metformin and sitagliptin are often prescribed together for the treatment of high blood sugar levels in patients with type 2 diabetes that can’t be controlled with metformin monotherapy.

They work through different mechanism but their effects are synergistic. Metformin reduces the absorption of glucose, reduces the release of stored glucose in the liver, and helps body to use glucose better while Januvia controls blood sugar by helping the pancreas to release more insulin and to lower the release of glucagon during meals.

Januvia doesn’t cause hypoglycemia, and that’s why this combination is considered to be safe. However, this combination doesn’t help patients who have insulin-dependent diabetes mellitus (type 1).

There is also product on the market called Janumet that already contain combination of metformin and sitagliptin in one tablet.

Patients should use these drugs together only if they are prescribed by the doctor. These drugs can cause serious side effects in patients with ketoacidosis and decreased renal function.

The table below shows side effects after Metformin and Januvia administration in recommendable doses. The incidence can be significantly increased if these drugs are overdosed or taken together.

Special precautions and warnings during Metformin and Januvia administration:

“Can you take Ketorolac and Tylenol together?“