NyQuil is a brand name for OTC medication which is used for relieving symptoms of common cold.

Some Nyquil’s preparations can contain other active substances such as: NyQuil D that contains nasal decongestive pseudoephedrine (30 mg/15 mL), NyQuil Sinus contains phenylephrine as nasal decongestant, Children’s NyQuil contains chlorpheniramine as antihistamine and has no alcohol.

Nyquil is available in syrup and and LiquiCap dosage forms. NyQuil contains sedating antihistamines, hypnotics, or alcohol, and that’s why it should be taken before sleep.

Robitussin is a brand name for OTC and prescription medications which are used for relieving cough and cold symptoms. 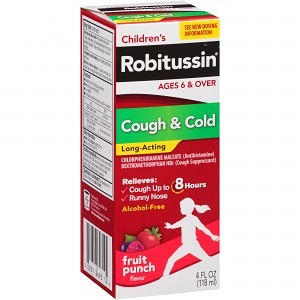 Mechanisms of action – How NyQuil and Robitussin work in the body

Guaifenesin acts by reducing the viscosity and increasing the volume of secretions in the trachea and bronchi. Studies have also shown that guaifenesin has muscle relaxant and anticonvulsant properties due to antagonism effects on NMDA receptors.

Can patients take NyQuil and Robitussin together

There should be no need to take those medications together at the same time as they act on the same way, so their effects will become additive and there is a high risk of serious side effects to happen.

NyQuil and Robitussin, both contain acetaminophen as an active ingredient, and these products are usually taken 3-4 times a day, so if these preparations are used at the same time, even in recommended daily doses, there is a high risk for acetaminophen to be overdosed (more than 4g daily), and this can cause potentially fatal, hepatic necrosis.

Some NyQuil and Robitussin products can contain pseudoephedrine and phenylephrine as active ingredients, and their potential interaction can amplify sympathetic (adrenergic) effects, including increased blood pressure and heart rate. Patients with cardiovascular diseases and patients with a history of heart attacks shouldn’t use these medicines.

NyQuil and Robitussins preparations usually contain antihistamines with hypnotic effects such as: doxylamine, diphenhydramine, promethazine or chlorpheniramine, so their combination may increase sedation and drowsiness.

A significant interaction that can cause cardiac arrhythmias or sudden death may occur after mixing NyQuil D that contains nasal decongestive pseudoephedrine and Robitussin formulations with antihistamine promethazine. However, this interaction is more likely to happen only in certain predisposed patients.

The table below shows the incidence of side effects after NyQuil and Robitussin administration in recommendable doses. This Incidence can be significantly increased if these drugs are taken together.

Special precautions and warnings during NyQuil and Robitussin administration:

“Can you mix Tramadol and Vicodin“