Can you take Claritin and Flonase together

It is used for relieving the symptoms of hives, skin rash, itching, sneezing, runny nose, watery eyes and other allergy or cold symptoms. Claritin can be also used for the treatment of chronic skin hives and itching.

Flonase is a Brand name for a nasal spray formulation containing fluticasone as an active ingredient. Fluticasone is a synthetic corticosteroid drug that prevents the release of body substances that can cause inflammation and pruritic symptoms of psoriasis and dermatoses.

Flonase Nasal Spray is used for the treatment and relieving nasal symptoms of seasonal and recurrent nonallergic and allergic rhinitis in adults and pediatric patients of 4 years of age and older.

There are no relevant and established studies and data of Flonase safety and effectiveness in children below 4 years of age. The recommended initial dosage in adults is 2 sprays in each nostril once a day.

Patients who are not adequately responding may use 2 sprays in each nostril two times a day which is the maximum total daily dose. Flonase is available only in the form of spray in dose of 50 ug/1. 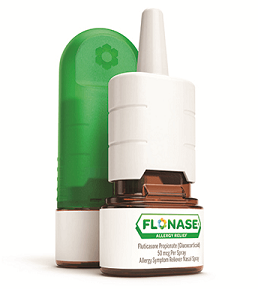 How does Claritin and Flonase work in the body

Loratadine is a long acting second generation antihistamine. Loratadine has similar pharmacology effects to other antihistamines, but unlike other H1-antagonists, loratidine has more competitive, specific, and selective antagonism properties for H1 receptors.

Exact mechanism of prolonged antihistamine effects is unknown, but it may be because of drug’s slow dissociation from the H1 receptor or because of the formation of its active metabolite desloratidine.

Fluticasone is a very potent vasoconstrictor and anti-inflammatory substance. Its effectiveness is the best in inhaled dosage forms due to its direct local effects. Fluticasone acts by binding to the glucocorticoid receptors.

Unbound corticosteroids molecules can cross the cells membranes of eosinophils and mastocytes, and then bind with high affinity to glucocorticoid receptors.

The results of drug-receptor interaction are: transcription alteration and protein synthesis, a reduced release of enzyme called leukocytic acid hydrolases, leukocyte adhesion to the capillary wall interference, reduction of collagen deposition, reduction of the proliferation of fibroblasts, prevention of macrophage accumulation into the sites of  inflammation, reduction of capillary membrane permeability and edema, decrease of complement components, inhibition of proinflammatory substances such as  histamine and kinin release, and interference with scar tissue formation.

Can patients take Claritin and Flonase together

Since there are no significant interaction between Claritin and Flonase nasal spray, patients can use them together for a treatment of allergies, but they always need to consult their doctor or pharmacist first.

Claritin is also second generation antihistamine and has less side effects compared to older antihistamines. However, patients need to see an allergist first for more definitive treatment options.

The table below shows side effects after Claritin and Flonase administration in recommendable doses. The incidence can be significantly increased if these drugs are overdosed or taken together.

Special precautions and warnings during Claritin and Flonase administration: