Other Brand names for warfarin products on the market are: Jantoven, Farin,  Marevan, Waran and Warfant.

Why should you take Aspirin every day?

Aspirin is a Brand name for a drug that contains acetylsalicylic acid as active ingredient. It works by lowering the substances in the body that can cause fever, pain and inflammation.

Aspirin is indicated to treat pain, and reduce inflammation and fever. Aspirin in lower dose (75-325mg) is sometimes used for a long-term treatment and prevention of heart attacks, strokes, and angina (chest pain) because it can prevent blood clothing.

Low doses of aspirin are usually given immediately after a heart attack to lower the risk of another heart attack or the death of heart tissue.

For cardiovascular conditions, Aspirin should be used only under the supervision of a doctor. Aspirin may be also effective in preventing certain types of cancer, such as colorectal cancer. 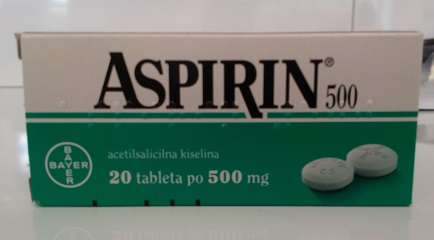 How does Coumadin and Asprin work in the body?

Aspirin manifest analgesic, anti-inflammatory and antipyretic poperties due to actions of both the acetyl and the salicylate portions of the molecule as well as by the active salicylate metabolite.

Aspirin irreversibly and directly inhibits the activity of both cyclooxygenase (COX-1 and COX-2) which results in decrease of the formation of precursors of thromboxanes and prostaglandins from arachidonic acid.

This makes acetylsalicylic acid different from other NSAIDS (such as ibuprofen, diclofenac or naproxen) which are reversible inhibitors. Aspirins antirheumatic actions are a result of its anti-inflammatory and analgesic.

The platelet aggregation-inhibiting actions of aspirin specifically include aspirins ability to act as an acetyl functional group donor to cyclooxygenase enzyme.

Irreversible acetylation renders cyclooxygenase enzyme inactive, thus preventing the formation of the aggregating agent thromboxane A2 in platelets. Since platelets lack can’t synthesize new proteins, the effects persist during the life of the exposed platelets (7-10 days).

Can patients take Coumadin and Aspirin together?

Patients on a Coumadin anticoagulant therapy should be very careful before taking any drugs for aches and pains. Taking NSAID (non-steroidal anti-inflammatory drugs) such as ibuprofen, naproxen, diclofenac, ketorolac, aspirin or any other NSAID for pain relief together with Coumadin can increase the risk of serious bleeding.

However, pain relievers that contain acetaminophen can be the best choice, and many doctors will recommend it. So, patients should never take Coumadin and Aspirin together without medical advice.

Aspirin will impair the function of platelets which are important for blood clotting, while Couamdin impairs blood clotting in a different way, by impacting the INR level.

If these are taken together at the same time, they will attack the body’s ability to do blood clotting in two separate ways. This could greatly increase the risk of having significant bleeding.

However, in some cases under doctor supervision these drugs combination can make sense. Coumadin takes care of cardioembolic “red clot” that occurs in blood low-flow states such as venous thromboembolism and atrial fibrillation, and the antiplatelet drug such as Aspirin treats the “white clot” associated with atherosclerosis.

Prothrombin time or INR should be monitored closely in patients on Coumadin therapy, and in many cases therapy need dose adjustment.

Patients should be advised to contact their doctor if they develop signs and symptoms of excessive anticoagulation, such as: bruising, vomiting, unusual or prolonged bleeding, headache, dizziness, change in stool or urine color, or weakness.

The table below shows the incidence of side effects after Coumadin and Aspirin administration in recommendable doses. The incidence can be increased if these drugs are taken together or overdosed.

Special precautions and warnings during Coumadin and Aspirin administration:

“Can you take ibuprofen while on blood thinners?“
“Aspirin for Preventing Flushing From Niacin“