Dermatofibroma or superficial benign fibrous histiocytoma are common and benign skin tumours which are more precisely describe as cutaneous soft-tissue lesions. The prevalence of dermatofibroma is about 3% of skin lesion examples received by dermatopathology laboratories. It is more frequent in adults and occurs more commonly in women.

It is most commonly located on the extremities usually at lower legs and is typically asymptomatic, although pruritus and tenderness can be present. The true cause of dermatofibroma is not known, but it is broadly accepted that it may result from a trauma including insect bite, follicular cyst and follicle rupture. There are some evidences supporting the neoplastic nature of the tumor.

A several histologic subtypes of dermatofibroma have been desribed. Tumor usually do not need removal unless diagnostic is uncertain and if particularly troubling symptoms are present.

In medical literature there are different names for dermatofibroma, such as:

Dermatofibroma characteristically looks like a fixed, slowly growing most commonly lonely red, pink or purple to brown nodules, papules or plaques that are usually located on the lower extremities but may also appear on trunk and arms. The surface can be smooth and shiny, or keratotic. The size of lesions may range from a few millimeters to >2 cm.

However, there are several clinical variants of multiple and giant dermatofibroma such as hemosiderotic dermatofibroma. In some, not so common cases pruritus and ulceration may represent related symptoms.

On palpation, a typical dimple-like depression in the overlying skin can be produced after pinching the lesion gently. Dermatofibroma is known to be persistent lesion; however it may shrink during the time and regress as a hyperpigmented, and to looks-like a macule.

As a conclusion, typical manifestations of dermatofibroma are raised, small and hard skin growths that are: 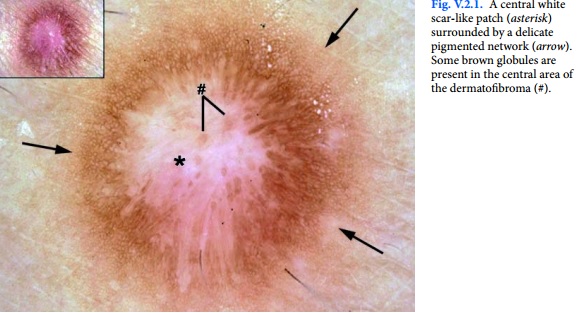 There are several different types of dermatofibroma which are basically distinguished by their histopathological findings. Though, it is important to know that there were cases of dermatofibroma where the histological features of several variants coexisting in the same lesion were desribed. Some of these variants also have different clinical findings as well as different rates of local recurrence, thus making correct diagnosis very important.

Rare cases of metastasis have also been reported. More studies are needed to confirm the variants of metastatic dermatofibromas and for now they are considered as benign tumors.

Except common dermatofibroma which is described above, there are also other variants of such as:

The true cause of dermatofibroma is still unknown. However, it is usually attributed to be a responsive process to some skin traumas such as arthropod bite, states after folliculitis, tattooing, tuberculin skin testing.  Clonal analysis also suggests that dermatofibroma may represent a true neoplasm.

Common dermatofibromas contain a combination of fibroblasts, macrophages and blood vessels. Most cases involve only the dermis but it may also extend to the subcutis. Altered immunity possible has an important role in many cases of multiple eruptive dermatofibromas related with different underlying conditions and medications.

Some studies have been also found that genetic component may exist.

Dermoscopy may be very useful adjunctive diagnostic technique for dermatofibromas. The most common pattern seen is a peripheral pigment network with a central white area.

Dermoscopy of a xanthomatous dermatofibroma demonstrates a homogeneous pattern with yellow shades and a peripheral pigment network. A green color may be a good indicator of the hemosiderotic dermatofibroma. If a indicative melanocytic or atypical pattern is noted with dermoscopy, a diagnostic biopsy should be performed.

Differential diagnosis should be made for following similar skin conditions:

What is dermatofibroma prognosis?

Typical dermatofibromas are considered non-malign lesions, and the prognosis for patients with common dermatofibromas is excellent. However, discomfort from pain or itching may be caused.

However, deep, cellular, aneurysmal, hemosiderotic and atypical types of dermatofibroma can be recurrent in almost every 5th patients, and they can also rarely metastasize. Such variants, or any indeterminant dermatofibroma, might be considered as potentially malignant tumors.

Although rare, in these particular cases pulmonary and nodal metastases were most commonly seen and some patients developed multiple satellite nodules, and deaths have occurred.

The primary tumors aimed to be cellular type, they are usually large, and however aggressive behavior is not predictable, although early or frequent reappearances of the tumor after incision should raise concern. Array-based comparative genomic hybridization (CGH) may prove useful in identifying these higher-risk variants.

The epithelioid type of dermatofibroma has also been reported to be able to metastasize.

Spontaneous regression has been reported and this may yield postinflammatory hypopigmentation, although this appears to be very rare.

There are no medications for dermatofibroma treatment, not any are recommended. Also in most cases no treatment is necessary. Simple diagnostic reassurance that the skin tumor/lession is benign may be indicated, unless some of the aggressive subtypes are doubted or diagnosed. In those with dark skin, liquid nitrogen freezing or steroid injection of may cause pigmentary change but they are usually temporary.

Intralesional steroid injections have been attempted with no-adequate results. Surgical treatment is the only way to get rid of dermatofibroma and it is most commonly very effective option

For patients who have cosmetically unacceptable lesions, in those whose dermatofibroma is symptomatic with intese tenderness and pruritus, or in cases where there is diagnostic doubt, or when aggressive variants are suspected, complete surgical excision, including the subcutaneous fat, is recommendable and ideal procedure. Obtaining a 3mm sideline has been shown to completely remove common type dermatofibromas.

It has been shown that one aggressive type of dermatofibroma called aneurysmal dermatofibroma, can be successfully treated with Mohs micrographic surgery.

An inverted pyramidal biopsy technique may allow for an aesthetically pleasing result, while still providing acceptable tissue for histologic findings.

Cryosurgery or superficially shaving can be attempted; however, recurrences are more likely.

Carbon dioxide and pulsed-dye laser treatments have been also used successfully in the dermatofibroma management.

An aggressive subtype or another diferentiate diagnosis should be ruled out. If multiple lesions develop with eruptive symptomatology, screening for a family history of this and for underlying related diseases and drugs should be considered. 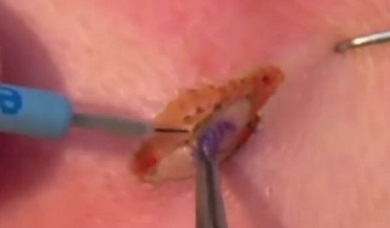 Some health care professionals use liquid nitrogen freezing methods to treat and remove dermatofibroma. During this procedure, liquid nitrogen is used to freeze dermatofibroma and flatten it to the level of the skin. Though, this method usually leaves behind a white scar. There are also chances of reoccurrence after treatment.

“What does a lupus rash look like? Is lupus life threatening disease?“