It stimulants activities keeps on active and hyperactive for many days. Withdrawal from this medication is like other amphetamines. Overdose of fenethylline can leave body hyperactive, exhausted, and anxious. It is very important for its abuser to go under the process of intense detoxification.

It is also known as amphetaminoethyltheophylline or amfethyline and comes under the brand name of Captagon.

This medicine is produced in the year 1961, in order to treat the “hyperkinetic” children, ADHD (Attention Deficit Hyperactive Disorder), narcolepsy, and depression. It was a suitable replacement of amphetamine in treatment of such conditions as it did not cause high blood pressure. It became an illegal drug in 1986, by the WHO (Word health organization).  Today, the Captagon pills contains little fenethylline diluted with other amphetamines.

Fortunately, both treatment and detoxification is available for the Captagon addiction. For this, you should meet a proper healthcare faculty that can understand the level of addiction and can take the step towards detoxification. You should understand your real condition that worsened after the addiction of this medication so that you can make your mind to go under treatment of this addiction.

Today, most of the counterfeit Captagon tablets do not contain fenethylline, but combination of substances that mimic the effects of the original molecule.

Fenethylline has been a controlled substance on Schedule I of the Controlled Substances Act since 1981 in the United States, where it is no approved for medical use or distribution.

Although the actual incidence of fenethylline was quite low worldwide, it became illegal in most countries in 1986 after being listed by the WHO for international scheduling under the Convention on Psychotropic Substances. In Canada and Germany, fenethylline is a Schedule III drug. The Drug Control Department of the Public Security Directorate of Jordan has set fenethylline under control in 1988.

What is the mechanism of action of fenethylline?

Fenethylline could be a pro-drug for amphetamine and theophylline as per results from early metabolic studies. The 13.7% and 24.5% of an oral dose is apparently cleaved metabolically in human beings into theophylline (weak stimulant chemically and pharmacologically related to caffeine) and amphetamine (active stimulant), respectively.

So these two stimulant agents produce the combined pharmacological action of fenethylline. Along with its precursors, fenethylline also seems to produce its pharmacological effects at the same time. Fenethylline known to increase the alertness by stimulating nervous system improves concentration and enhances physical ability.

Along with such effects it also produces a feeling of well being and appetite suppression because of chemical resemblance to neurotransmitters (like dopamine and adrenaline).

What are the therapeutic indications of fenethylline?

After an hour of administration, fenethylline start showing its therapeutic effects, which are:

What are the side effects of fenethylline?

Side effects associated with fenethylline use were:

What are the signs of fenethylline addiction?

What are the long term effects of fenethylline abuse?

Fenethylline abuse is not similar to amphetamine, and its effects are also not common. The abuse of the fenethylline is done by the militants mainly as it gives them intense strength to fight in the wars. There are some common long term effects of fenethylline such as:

How long fenethylline stays in your body?

Fenethylline is taken in tablet form by oral route. As per some studies, if fenethylline is injected intravenously or intracerebroventricularly, responsible for convulsions or seizures. Fenethylline is converted into d-amphetamine and theophylline in the body.

These compounds are highly active and when transferred to the blood stream they cross the blood brain barrier thereby show effects at central level. Fenethylline is absorbed rapidly and reaches its peak plasma concentration in about an hour and start showing its effects.

Therefore fenethylline stays in our body for about 1- 2 days and it takes a week or more for complete elimination of the drug from the body.

Fenethylline use in Syrian war and increased incidence of seizures

Seizures in Syria in 2015 also increasingly suggest the use of Captagon by militant groups (with the exception of al-Qaeda-linked groups who adhere to a more puritanical interpretation of Islamic law in the area of substance use). When Captagon is used in military combat soldiers feel euphoric, fearless and powerful, can remain awake for days and kill in a numb and reckless manner.

Its stimulant properties offer military advantages during protracted fighting enabling those using it to operate for significantly longer periods of time. In that regard, it is similar to amphetamine and methamphetamines that have a long history of military use for their stimulant and performance-enhancing effects.

What is fenethylline addiction?

Fenethylline was first introduced for the treatment of ADHD (Attention Deficit Hyperactive Disorder), narcolepsy, hyperactive disorder and depression. It is a substance that produces a state of euphoria, well being, improved performance, stamina, and improved physical performance.

Therefore people start abusing this medication, and became addicted to this substance. Captagon produces severe side effects and extreme withdrawal effects, when somebody wants to cease his addiction.

Captagon or fenethylline is the drug which is illegally marketed in the Arabic drug market and abused frequently in Arab countries with a huge increase in usage in the last decade. Fenethylline has been produced clandestinely since 1981 and now it is synthesized in Arab countries and sold for $3 to $20.

And it is also exported for weapons and cash. An increase in fenethylline abuse has been rise from 11% to 16.1% in Federal Republic of Germany from 1976 to 1983. Due to the lack of the steady supply of cocaine and high cost of this drug, the use of fenethylline abused has increased alarmingly which was 71.8% in 1984. 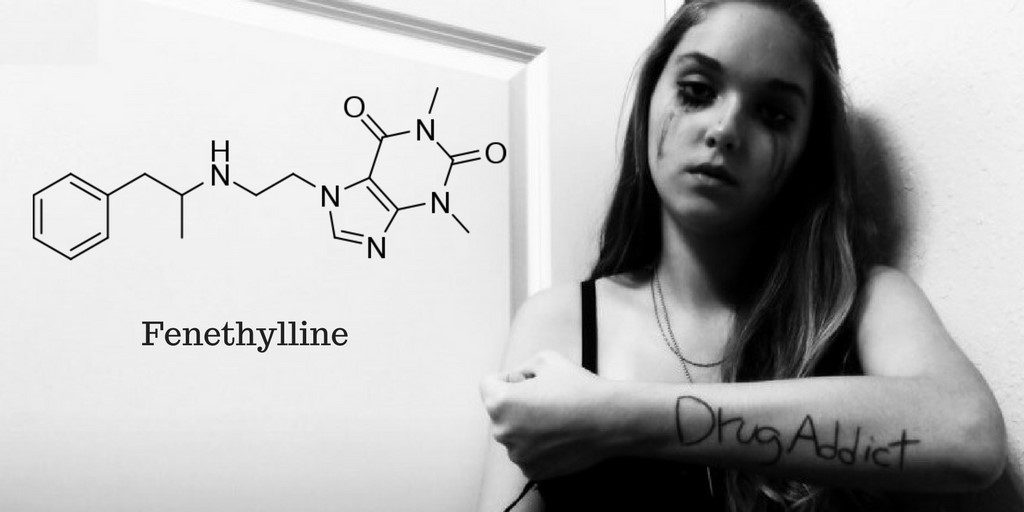 Students abuse fenethylline to stay awake for final exams and women use it as an anorectic agent in order to reduce weight. It is abused by soldiers because it allows them to fight without fatigue and with high alertness and performance for significant period of time.

Militants used it to fight longer and harder without realizing their higher levels of pain and exertion. Militants abuse this drug because it gives a sense of well being, with extra energy and euphoria. Fenethylline abusers can stay awake for days at a time, and also it allows them to bear the pain of being shot by bullets in the battlefield.

There are some user experiences when they took the fenethylline and use it recreationally:

Some experiences that have shared on various websites that show “How Captagon affected them and what are its effects on the body”.

As a Lebanese user:

“You can’t sleep or even close your eyes, forget about it,” “And whatever you take to stop it, nothing can stop it.”

As per another user:

“I felt like I own the world high,” “Like I have power nobody has. A really nice feeling.”

“There was no fear anymore after I took Captagon,”

A drug control officer in the central city of Homs, western Syria, described protesters’ and fighters’ behavior under the influence of Captagon as:

‘…we would beat them, and they wouldn’t feel the pain… many of them would laugh while we were dealing them heavy blows…’

How dangerous is Captagon?

By the 1980, medical community determined that Captagon is a controlled substance and its addictive properties outweigh its clinical benefits. Initially, it was used to treat narcolepsy and depression, but its use was banned soon after awareness of its addictive properties and harmful effects. The abuser of fenethylline can suffer from severe side effects such as extreme depression, sleep deprivation, heart, and blood vessel toxicity, and malnutrition.

Antidote and emergency treatment for fenethylline

Ensure that adequate decontamination has been carried out. If patient is not breathing, start artificial respiration, preferably with a demand valve resuscitator, bag-valve-mask device, or pocket mask, as trained. Perform CPR if necessary.

There is no specific antidote fenethylline posioning.

Following symptoms should be treated as shown below:

Fenethylline withdrawal symptoms include psychomotor agitation or retardation, fatigue, unpleasant dreams, increased appetite and both insomnia and hyper somnia. Such symptoms cause discomfort but not life-threatening.

These symptoms last for only few days and after overcoming these symptoms, the full treatment can begin. Therefore 24 hour care and support from a healthcare provider is necessary as only they can help you to walk through this uncomfortable process.

For getting the proper treatment, you should get to the root of your addiction. Psychologists help you to get over this addiction by proven counseling and therapy techniques that are planned after knowing your specific needs and circumstances. Such techniques may includes, group therapy, mind mapping and mindfulness meditation.

Captagon shows severe physical as well as psychological effects on the body which needs proper and a successful rehabilitation in order to restore physical and mental well being. You should opt for a treatment that offers a proper exercise and nutritional plan which also includes health and wellness education, fitness and massage therapy, yoga, and meditation.

If you are successful in getting this type of treatment, you are ready to live a healthy and well-rounded lifestyle. sIn a relapse prevention programme, counselors will help prepare you for a sober life by coaching you to recognize and understand your particular triggers. Ultimately, you’ll build your own plan for sustained sobriety.

Before going for a detoxification process, you should understand the proper detoxification method because complications may also arise due to impropriate detoxification methods. Even some abusers could turn to cross-addictive substitutions. This happens when addicts’ abuse prescribed drugs meant for Detox purpose. Dependency could result from abuse, when fenethylline is taken beyond prescribed amount. Therefore you should undergo a medically supervised Detox program that minimizes the effects of severe withdrawal with less pain and less strain.

What are the damages caused by Captagon or fenethylline?

Audiovisual hallucinations are a common symptom of a Captagon addict. An addict can suffer from disturbed senses and therefore he begins to imagine unreal things. Fenethylline abuse leaves a state of sensory illusion where abuser feels insect stirring on his skin. Some people may also suffer from schizophrenia and megalomania state.

Does fenethylline show up on drug tests?

This compound belongs to the class of organic compounds known as xanthines. Fenethylline is prodrug to amphetamine and theophylline. Since it contains amphetamine molecule in its moiety, it can be detected on routine drug tests.

The most popular test for amphetamines is the urine test. These tests detect even trace amounts of amphetamine in your urine. Most of these types of test detect the actual drug rather than something produced by the drug. It is very easily detected and very difficult to mask.

Urine Drug Test – The length of time an amphetamine it is detectable in the urine will depend upon the type of amphetamine the person is using, as well as the frequency of your use.  On average and generally, all amphetamines will clear your system in about 5 days.

Hair Drug Test:  A hair drug test typically requires 1 ½ inches of hair growth from the person being tested. Growth is considered from the base of the scalp to 1 ½ inches of length.  Detection of amphetamine for this length of a hair sample can be approximately 90 days from last use.

Saliva Drug Test: Fenethylline can also be detected in mouth. Also known as mouth swab drug test. Saliva can retain trace amounts of amphetamine and its metabolites for up to 3 days.  The detection time of Amphetamine may also be to 3 days.

Blood drug test: A blood test is the most accurate test for detection of amphetamines. It has the shortest time span for detection or a maximum of 1 day from the time of use. A blood test can also distinguish the difference between levo-amphetamines and dextro-amphetamines; this determines if the person is taking Adderall or Vyvanse. This form of testing will also indicate if this is normal prescribed use or if it is illegal abuse.

Are there ways to pass an fenethylline drug test?

There are some strategies that may help you to pass an amphetamine drug test.  But, each of these has its own unique challenges ad risks, as well as its own weaknesses and strengths:

“How addictive is baclofen? Is the drug baclofen a narcotic?“