Flexeril is a Brand name for a medicine containing cyclobenzaprine as an active ingredient. This drug is used as a muscle relaxant. This drug works by blocking transmission of nerve impulses that causes pain sensations that are sent to the Central nervous system. Chemically cyclobenzaprine is related to a class of antidepressants that are known as tricyclic antidepressants.

This medicine is often used together with physical therapy in order to treat skeletal muscle conditions such as injury or pain. It’s also available under the brand names FusePaq Tabradol and Fexmid. Flexeril is also prescribed off-label for fibromyalgia treatment.

As a prescription medicine it is available only in the form of tablet in dose of 10 mg.  Cyclobenzaprine was approved by the FDA in 1977 under the brand name Flexeril. It is currently manufactured by PD-RX Pharmaceuticals.

Soma is a Brand name for a muscle relaxant medicine containing Carisoprodol as an active ingredient.  It works by inhibiting pain sensations between the nerves in the CNS. It is most usually co-administrated with rest and physical therapy in order to treat injuries, and relieve muscle spasms caused by different musculoskeletal conditions. Soma is available in the form of tablet in doses of 250 mg and 350 mg.

FDA approved Soma in 2007 for use treat discomfort associated with acute, painful, musculoskeletal conditions.  It is originally manufactured by Meda Pharmaceuticals.  Carisoprodol is often used in combination with aspirin. It can be also used in combination codeine. 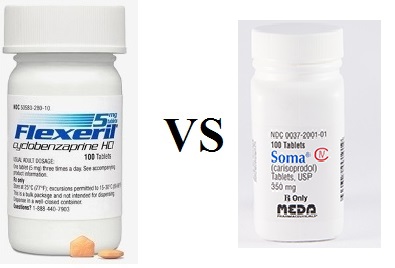 Flexeril and Soma are medicines which are both used as a muscle relaxant and approved for short-term treatment of different painful musculoskeletal conditions. They are approved only for acute pain during 1-3 weeks period. Both drugs are used off-label to treat fibromyalgia.

These drugs also have different mechanisms of action. Carisoprodol from Soma is a central nervous system depressant that works as a sedative drug and skeletal muscle relaxant. Carisoprodol blocks neuronal signaling within the spinal cord and reticular formation of the brain, resulting in alteration in pain perception and sedation. But, it exact mechanism of action is not known yet.

It primarily works by blocking pain sensations between nerves and brain. Cyclobenzaprine from Flexeril does not directly works on the neuromuscular connections or the muscle but relieves muscle spasms through a central action.

Cyclobenzaprine binds to serotonin receptors and it is considered as a 5-HT2 receptor antagonist that reduces tone of muscles by decreasing the activity of descending serotonergic neurons. It primarily works by blocking transmission of pain sensation to brain.

Both medicines are well absorbed after oral administration. Flexeril binds to plasma proteins with higher rate compared to Soma. (Flexeril plasma binding is 93% while Soma’s is about 60 %). Soma metabolism is predominately hepatic. It is metabolized in the liver through the cytochrome P450 oxidase isoenzyme CYP2C19.

Cyclobenzaprine has extensive metabolism, both gastrointestinal and hepatic and it is excreted primarily as glucuronides compounds via the kidney.  Carisoprodol can be eliminated via renal and non-renal routes. Flexeril has a longer elimination half-life time of 18 hours (range 8-37 hours) compared to Soma, which half-life is about 8 hours.

Abuse of Soma poses a risk of overdose leading to CNS and respiratory depression, low blood pressure, seizures and even death.  Although rare, Flexeril over dosage may be fatal. Intake of multiple doses in combination with alcohol is common in deliberate Flexeril overdose.  Both physical dependence and tolerance have been reported after prolonged use of Soma.

Withdrawal symptoms may include insomnia, abdominal cramps, headache, vomiting, tremors, muscle twitching, anxiety, ataxia, hallucinations, and psychosis.  Flexeril is only mildly habit forming and not as dangerous as Soma.

Soma is classified in pregnancy category C by the FDA pregnancy list of drugs. This means that it should be used with caution and only if benefits outweigh risks. Animal studies show risk and human studies not available or neither animal nor human studies done. Soma also enters breast milk; use with caution during breasfeeding.

Flexeril vs Soma side effects

Can you take Flexeril and Soma together?

Using Flexeril together with Soma may increase the risk of side effects such as dizziness, drowsiness, and difficulty concentrating. Some patients may also experience impairment in thinking and judgment. Patients should avoid combination of these drugs and should limit the use of alcohol while being treated with these medications.

They should also avoid driving or operating hazardous machinery during while they are taking these drugs. However, under doctor supervision these drugs can be prescribed together during a short-term treatment of serious musculoskeletal conditions. They are in some cases prescribed off label for the treatment of fibromyalgia.

Soma is significant concern, because of its potential for dependence and abuse. Several researchers have called for carisoprodol to be classified as a controlled substance.

Carisoprodol is metabolized to meprobamate, a substance  that may cause physical and psychological dependence and this is why Soma carries a concern to be abused. Soma high can be manifested with next symptoms: ataxia, dizziness, drowsiness,  headache, vertigo, slurred speech, weakness, impairment.

Can I take Tramadol and Flexeril at the same time?
Can you take Ambien with Flexeril?