Buspirone is an anti-anxiety drug that modulates the chemicals of the brain giving the user a feeling of calm. However unlike other drugs of this class, its mechanism of action does not involve binding with GABA receptors. It is used for the treatment of signs and symptoms of anxiety, such as irritability, fear, tension, dizziness, tachycardia, and other physical symptoms.

It is also used to treat depression. Buspirone has the chemical formula 8-[4-[4-(2-pyrimidinyl)-1-piperazinyl]butyl]-8-azaspiro[4.5]decane-7,9- dione monohydrochloride. Its molecular weight is 422 and it has the following structural formula:

The most commonly used trade for buspirone is BuSpar.

How Buspirone works in the body?

The exact mechanism of action of buspirone is unknown. However in vitro studies have shown that it has a high affinity for both, presynaptic and postsynaptic serotonin 5HT1A receptor. Serotonin is a molecule which binds to these receptors and through various expreminents it has been shown to have a positive infuence on our moods and cognition.

So while the exact mechanism of action is unknown, it is thought that the drug maintains a balance of activity of these receptors  and hence plays a role in improving mood.

Since its mechanism of action is unique and does not involve binding with GABA receptors, buspirone is the only anxiolytic drug that does not cause sedation. 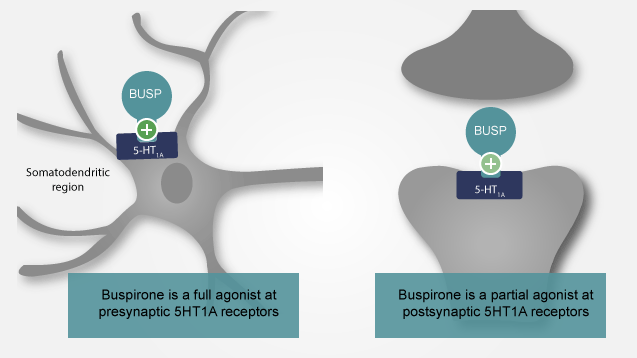 What are the FDA approved indications for Buspirone?

The FDA has approved the use of buspirone for anxiety disorders and symptoms associated with these such as fear, insomnia, irritability, palpitations, sweaty hands, and other physical signs and symptoms. It has also been indicated for the treatment of depression, an augmentation drug to selective serotonin reuptake inhibitors (SSRI’s).

Off the label uses include the treatment of negative symptoms of schizophrenia, hypoactive sexual desire disorder in women, attention deficit hyperactivity disorder and agitation and aggression in older patients with dementia.

It is noteworthy that all these off the label uses are still under research and hence the physician should first try other, proven drugs when treating these diseases. Buspirone should only be given if the FDA approved drugs for these diseases do not show the desired effect. 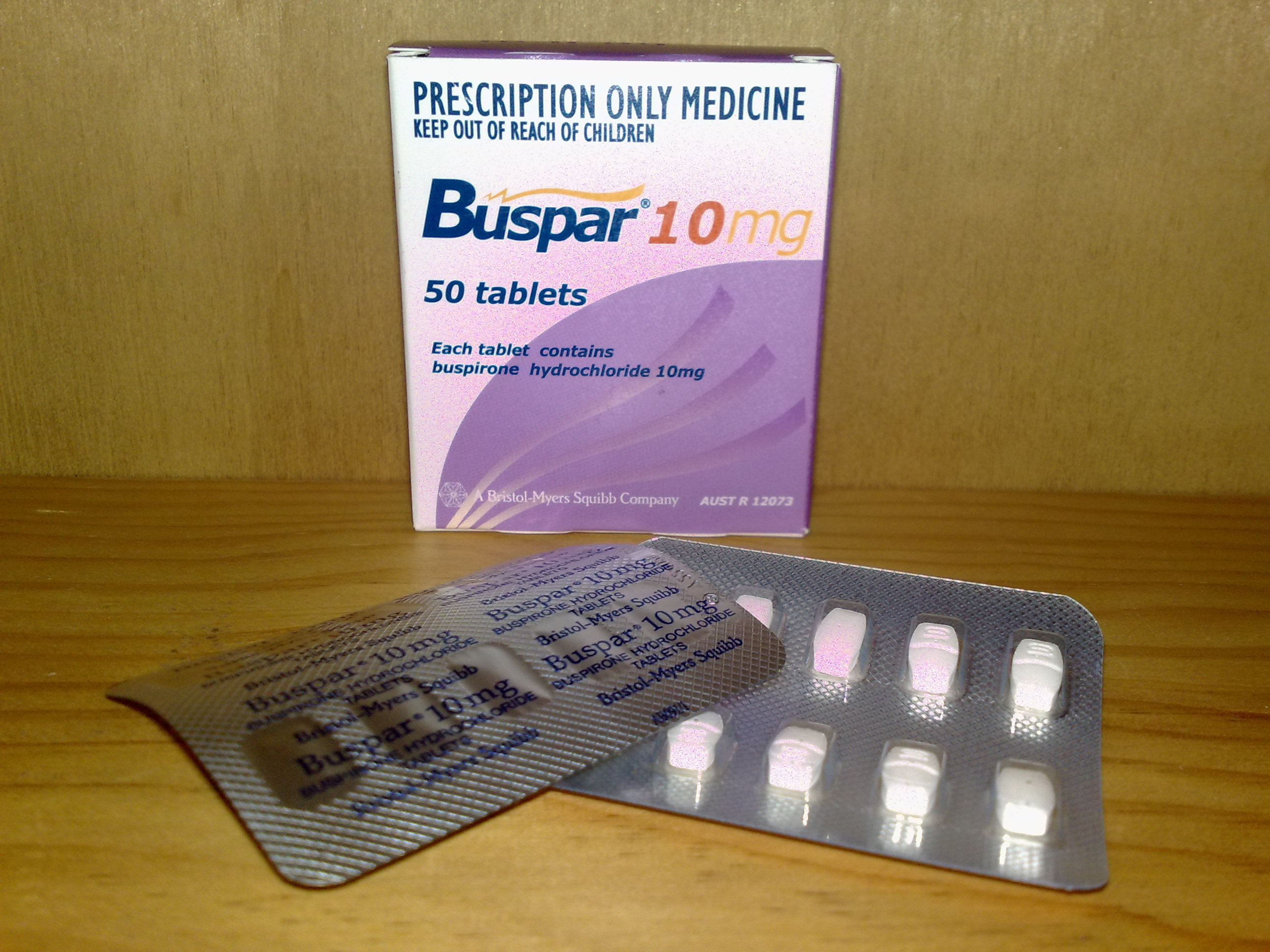 The recommended initial dose of buspirone for treating general anxiety disorders is 15mg (7.5mg, two times a day). However if desired effect is not obtained the dosage can be increased to a maximum of 60mg per day. The recommended way of increasing dose is that the dose should be increased 5mg after every two to three days.

While prescribing the drug for off the label uses, the physician can use his experience and severity of disease because there are no guidelines for dosage in these diseases.

In mild to moderate hepatic or renal impairment, the dosage of buspirone needs to be adjusted.  The recommended dose reduction is 25-50%. In severe renal or hepatic disease, the drug should be discontinued since the drug is metabolized by liver and mainly excreted by the kidneys.

How long does it take for Buspirone to work?

Buspirone has a unique mechanism of action than those of other anxiolytics. Therefore its onset of action also differs from other anxiolytics. While benzodiazepines and barbiturates take only hours to exert their effects, buspirone may take 2 to 4 weeks to fully exert its effect on the body. So this drug is not indicated for short periods of anxiety e.g. exams.

How long does Buspirone stay in the system – Blood, Urine, Hair, Saliva?

Buspirone stays in the system for usually 18-24 hours. Buspirone is excreted up to 63% in 24 hours. It has a half-life of only a few hours. Due to its short half-life, this drug leaves the urine, blood, hair and saliva within 18-24 hours. Usually, the drug leaves the body as fecal excretion and metabolites. It is rapidly absorbed in the body.

It undergoes significant first pass metabolism. When buspirone levels were checked in patients after its administration, the results came out in which it was evident that this drug remains in blood in unchanged form only about 1% and this occurs in 2-3 hours. Rest of the drug is totally eliminated from the body.

Buspirone is a fast acting drug and has a short half-life. This is very beneficial as it prevents the body from the adverse effects of this drug. The short half-life excretes it from hair, blood urine and saliva.

Buspirone is a selective anxiolytic, with minimal CNS depressant effects. It does not affect driving skills and has no muscle relaxant or anticonvulsant properties. The drug interacts with the 5HT1A type of brain serotonin receptors as a partial agonist, but the precise mechanism of this anxiolytic effect is unknown. Buspirone has a slow onset of action (2-4 weeks).

Tolerance development is minimal with chronic use, and there is little rebound anxiety or withdrawal symptoms on discontinuance.  Buspirone is metabolized by CYP3A4 enzyme, and its plasma levels are markedly increased by drugs such as erythromycin and ketoconazole.  Side effects of Buspirone include tachycardia, paresthesia, pupillary constriction and GIT distress.

Buspirone has minimal abuse liability and is not a schedule controlled drug.  The drug appears to be safe in pregnancy. Still, if a pregnant woman is going to take this drug, then she should inform her physician about it.

It is chemically not related to barbiturates, anxiolytics, sedative or benzodiazepines. Buspirone also has affinity for D2 receptors in the brain. Other neurotransmitters may also be affected by buspirone. To summarize, due to low half-life, this drug i.e. buspirone, exits the system within 24 hours.

Does Buspirone show up on a drug test?

In all the cases in which the result was false positive, the drug turned up as benzodiazepine, but as it is stated that this class of anxiolytic drug has no connection with benzodiazepines. This is the complex point in the drug tests of this drug. Some pharmacists now believe that buspirone can show as benzodiazepine on a drug test.

Mostly, the drug test result for buspirone is negative, meaning that it doesn’t show up on drug test, but only a few incidences have been seen in which buspirone shows up as benzodiazepine.

Precautions during Buspirone use

Buspirone should not be taken during or within 14 days of use of monoamine oxidase inhibitors (MAOI’s) due to the risk of developing serotonin syndrome (characterized by high blood pressure, fever, sweating, and tremors).

Since buspirone has no proven efficacy in the treatment of psychotic disorders, it should not be used as a first line antipsychotic drug.

Buspirone is a FDA Pregnancy category B drug. This means that not many studies of buspirone safety in pregnant women have been carried out. However studies in animals show no harm to the fetus. So if the physician feels that it is essential, then buspirone is not contraindicated.

Usage of buspirone in breastfeeding mothers is still controversial. An exclusively breastfed 11-week-old infant whose mother took 10 mg of this drug and 300 mg of venlafaxine daily showed no adverse reactions but since limited information is available on this issue, the drug should be avoided till it becomes absolutely necessary.

Medications that are notorious to interact with buspirone include:

If you’re on any of the above medications, or have recently ended the chronic use of the above drugs, it is advisable to let your doctor know.

Buspirone is an anxiolytic drug which has a few side effects too. The side effects which are seen include chest pain, muscle weakness, confusion fever, sore throat, incoordination of body movements, skin rashes, patches on skin, stiffness of muscles, general body stiffness, joint stiffness, mental depression, sensation of tingling on feet and hands, subcutaneous sensations of itching and in comfort.

Patients with severe renal diseases and severe liver disorders should not take buspirone. It is contraindicated in these patients. If the patients are hypersensitive to buspirone hydrochloride, then it should not be taken, otherwise it would result in very severe hypersensitivity reaction in such patients. One thing is very important that if the patient has taken any type of monoamine oxidase inhibitor in the past 14 days, then he should not take this drug i.e. buspirone. If the patient takes buspirone along with monoamine oxidase inhibitor, then it would most probably result in high blood pressure.

“Buspirone and Xanax – Similarities, differences, Interaction together“
“Can I take Imodium while pregnant?“