What is Macrobid capsule? 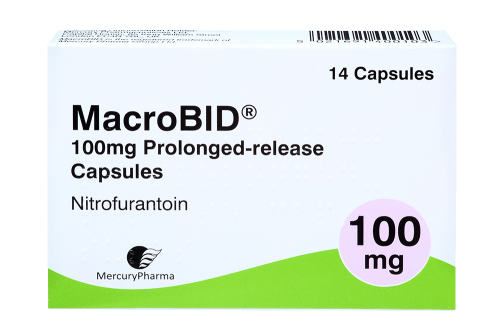 In order to reduce the development of drug-resistant bacteria and maintain the effectiveness of Macrobid and other antibacterial drugs, Macrobid should be used only to treat or prevent infections that are proven or strongly suspected to be caused by bacteria.

The chemical name of nitrofurantoin macrocrystals is 1-[[[5-nitro-2-furanyl]methylene]amino]-2,4-imidazolidinedione. The molecular structure is the following:

The chemical name of nitrofurantoin monohydrate is 1-[[[5-nitro-2-furanyl]methylene]amino]-2,4- imidazolidinedione monohydrate. The molecular structure is the following:

This compound belongs to the class of organic compounds known as hydantoins. These are heterocyclic compounds containing an imidazolidine substituted by ketone group at positions 2 and 4.

How long Macrobid stays in your system?

Nitrofurantoin, when administered orally, is absorbed in the upper gastrointestinal tract and plasma concentrations of nitrofurantoin are low after a single oral dose of 100 mg Macrobid capsule. Nitrofurantoin is a medication which is highly soluble in urine and due to this reason, it gives brown color to the urine.

Mechanism of action of Macrobid

The mechanism of the antimicrobial action of nitrofurantoin is unusual among antibacterials. Nitrofurantoin is reduced by bacterial flavoproteins to reactive intermediates which inactivate or alter bacterial ribosomal proteins and other macromolecules.

As a result of such inactivations, the vital biochemical processes of protein synthesis, aerobic energy metabolism, DNA synthesis, RNA synthesis, and cell wall synthesis are inhibited. Nitrofurantoin is bactericidal in urine at therapeutic doses.

The broad-based nature of this mode of action may explain the lack of acquired bacterial resistance to nitrofurantoin, as the necessary multiple and simultaneous mutations of the target macromolecules would likely be lethal to the bacteria.

What is the dosage of Macrobid?

The recommended dose of Macrobid is different depending on whether it is being used to treat a urinary tract infection or prevent one.

In general, here are the ranges of oral doses given:

Indications and usage for Macrobid

Macrobid should be used only to treat or prevent infections that are strongly suspected to be caused by susceptible bacteria. In order to reduce the development of drug-resistant bacteria and maintain the effectiveness of Macrobid and other antibacterial drugs are used.

They should be considered in selecting antibacterial therapy when culture and susceptibility information is available. Local epidemiology and susceptibility patterns may contribute to the empiric selection of therapy, in the absence of such data.

What are the contraindications of the Macrobid?

Macrobid is contraindicated in patients with anuria, oliguria or impaired renal function (creatinine clearance under 60 ml per minute or clinically significant elevated serum creatinine). Because of impaired excretion of the drug, such patients carry an increased risk of toxicity.

Is Macrobid safe in pregnancy?

Macrobid comes under the pregnancy category B, which stated that there is no harm to the fetus was reported in animal studies even at higher doses. When nitrofurantoin given in mice at 25 times higher doses than human dose, there were no fatal malformations were observed. And when it is given in 68 times more than normal human dose, it caused growth retardation and a low incidence of common malformations.

However, there are no adequate studies were given in pregnant women nonetheless this drug should be used during pregnancy only if clearly needed.

Can Macrobid be taken by the nursing mother?

Macrobid should not be administered by the nursing mothers because it is detected in human breast milk in trace amounts. A decision should be made whether to discontinue nursing or to discontinue the drug because nitrofurantoin has the potential for serious adverse events in nursing infants (below 1 month of age especially). One can also consider discontinuing the nursing for a while, taking into account the necessity of the drug to the mother.

Can Macrobid be used in pediatric patients?

In an infant below the age of one month, the use of nitrofurantoin is contraindicated. In the pediatric patients below the age of twelve years, the safety and efficacy of Macrobid has not been established.

What should I do, in case of Macrobid overdosage?

Acute overdosage of nitrofurantoin can result in vomiting, there have been no other specific symptoms noted with the overdose of this medication. In case of the overdose, induction of emesis should be considered. Higher fluid intake should be maintained in order to excrete the drug through the urine because there is no specific antidote for this drug. Nitrofurantoin is dialyzable.

What are the side effects of Macrobid?

Some common side effects of Macrobid include:

Diarrhea, gas, nausea, and headache are common side effects. These usually do not need medical attention. However, you should check with your doctor, if they are severe.

Severe side effects of Macrobid:

If you have any of these symptoms while taking Macrobid, check with your doctor right away. Some of them could indicate liver problems.

Other side effects that warrant an immediate call to the doctor include:

Rare Side Effects of Macrobid:

Some of the rare side effects of Macrobid are:

Can Macrobid be taken in Glucose-6-phosphate dehydrogenase (G-6-Pd) deficiency?

Can Macrobid be taken by the patients with hepatotoxicity?

Macrobid (nitrofurantoin microcrystals) capsules are contraindicated in patients with a history of cholestatic jaundice and hepatic dysfunction. Fatalities have also been reported; however, most acute reactions are self-limiting and resolve spontaneously.

If the liver damage seems to occur with use of this medication, it should be withdrawn as soon as possible. A reduced dosage may also be necessary to prevent toxicity because nitrofurantoin is partially metabolized by the liver.

Can Macrobid be taken by patients with renal dysfunction?

The risk of toxicity can also be increased due to the reason for the elimination of nitrofurantoin by kidneys; therefore it is recommended that the caution should be practiced if using the nitrofurantoin in patients with renal dysfunction.

Can Macrobid be taken by the patients with colitis?

Most antibacterial agents can cause pseudomembranous colitis. The severity of colitis may range from mild to life-threatening with an onset of up to two months following cessation of the therapy. The toxin of Clostridium difficile is believed to be the primary cause of colitis associated with the use of antibiotics because antibiotics can permit the growth of Clostridium difficile and thereby alters the normal flora of the colon.

Severe diarrhea, persistent diarrhea, and severe abdominal cramps are some symptoms of colitis. Such symptoms are often associated with passage blood and mucus. The most common culprits are clindamycin, lincomycin, the aminopenicillins (amoxicillin, ampicillin), and the cephalosporins. In patients with a history of gastrointestinal diseases, the broad spectrum antibiotic therapy should be used cautiously.

In patients with colitis, the nitrofurantoin in the more severe course can flare up the underlying disease. If significant diarrhea occurs during therapy, the culprit antibiotic should be discontinued. For diagnosis, stool culture for Clostridium difficile and stool assay of C. difficile can be helpful. In cases of severe diarrhea, a large bowel endoscopy should be considered as an established diagnosis.

Can Macrobid be taken by the patients with peripheral neuropathy?

Precaution is needed to be practiced while using nitrofurantoin therapy in patients with one or more risk factors or preexisting peripheral neuropathy.  Periodic monitoring of renal function is recommended during prolonged therapy.

Can Macrobid be taken by the patients with respiratory impairment?

In patients who have received continuous treatment for 6 months or longer, chronic pulmonary reactions have been reported with the use of nitrofurantoin. One should practice precaution while using this medication in patients with pulmonary dysfunction.

Macrobid interactions with other Antibiotics

Antagonism has been demonstrated in vitro between nitrofurantoin and quinolone antimicrobials. The clinical significance of this finding is unknown.

Can Macrobid be taken with fluconazole?

The concurrent administration of both can cause moderate interaction. Both together can increase the risk of hepatic and pulmonary toxicity. However, the mechanism of the same is unknown.

In a patient taking nitrofurantoin for 5 years, and when fluconazole was added to his regimen, he developed respiratory symptoms such as fatigue, dyspnea, cough, pleuritic pain, and tracheal pain. Hepatic enzyme elevations have also been reported after 2 months.

Chest x-rays and respiratory tests were performed as a diagnosis of pulmonary fibrosis. The symptoms improved after discontinuation of nitrofurantoin and fluconazole combination. Pulmonary toxicity has also been reported with nitrofurantoin and both drugs individually known to cause hepatic toxicity.

Until more information is available it may be advisable to monitor patients for signs of adverse pulmonary and hepatic effects during concomitant administration. Patients should be advised to notify their physician if they develop a cough, dyspnea, fatigue, or pain.

“What is cefotaxime used to treat?”