What does Metformin do in the body?

Absorption: Metformin is absorbed over 6 hours, and its bioavailability is about 50 to 60% under fasting conditions.

When it taken together with food absorption is decreased and delayed. Some findings indicates that absorption level is not dose-dependent, suggesting that absorption occurs through a saturable process.

Metformin’s plasma protein binding is negligible, as reflected by its very high apparent volume of distribution. Steady state after metformin administration is usually reached in one or two days.

Metabolism: Metformin does not get trough the metabolism. It is eliminated from the body via tubular secretion and excreted unchanged in the urine. It can’t be detected  in plasma within 24 hours after oral administration.

Glyburide is a Generic name for an oral fast and short acting anti-diabetic drug that belong to the second generation sulfonylurea class.

The second generation means that this drug undergoes enterohepatic circulation, this generation drugs are more potent and have shorter half-lives than the sulfonylureas first-generation drugs such as: acetohexamide, carbutamide, tolbutamide and chlorpropamide.

Glyburide is used together with exercise and diet and sometimes in combination with other drugs to treat type 2 diabetes (non-insulin-dependent diabetes mellitus).

This drug will lower blood sugar levels in blood only in patients whose bodies produce insulin naturally, that’s why Glyburide is not used for the treatment of diabetes type 1or diabetic ketoacidosis. It is available in following doses: 1.25, 2.5, and 5 mg.

Popular Brand names on the market for products containing Glyburide as an active ingredient are:

It is also available in combination with metformin in one dosage form under the following Brand names: Benimet, Glucovance, Glibomet, Glucored and Glucored Forte. 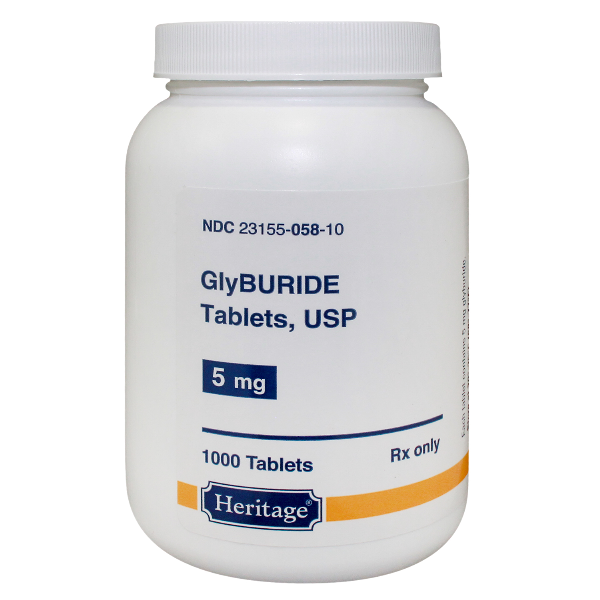 How does Metformin and Glyburide work in the body?

Glyburide’s primary mode of action, in which this drug lower sugar levels in blood, is stimulation of insulin secretion from the beta cells of pancreas, an effect which is dependent upon beta cells function in the pancreatic islets.

Depolarization then stimulates influx of calcium ions through voltage-sensitive calcium channels, raising concentrations of calcium ions in cells, which then prompts the secretion of insulin.

Stimulation of insulin secretion in response to a meal is major importance for our body. Fasting insulin levels are not raised even on long-term use of Glyburide but the postprandial insulin response remains to be enhanced after at least 6 months of Glyburide therapy.

However, some patients fail to initially response, or during time gradually lose their responsiveness to sulfonylurea drugs and Glyburide generally. It has been shown that glyburide can decrease postprandial blood glucose, fasting plasma glucose and glycosolated hemoglobin (HbA1c) levels.

Can patients take Metformin and Glyburide together?

Glyburide stimulates insulin release from the pancreas, directing the body to store blood sugar and thus reducing the sugar levels in blood.

Metformin has three different modes of actions: it lowers intestines absorption of sugar, stops liver from converting stored sugar (glycogen) into blood sugar; and it helps body to use insulin more efficiently.

There are also products on the market containing the combination of metformin and Glyburide in one tablet, such as Benimet, Glucovance, Glibomet, Glucored and Glucored Forte.

However, under certain conditions and in some predisposed patients, too much metformin and Glyburide can cause lactic acidosis a serious condition.

Lactic acidosis symptoms are usually quick and severe to appear and usually occur when other health problems not related to the medicine are present and are very severe, such as a heart attack or kidney failure.

So, doctor should follow the beginning of therapy especially during the first few weeks that you take this medicine.

The table below shows the incidence of side effects after Metformin and Glyburide administration in recommendable doses. The incidence can be increased if these drugs are taken together or overdosed.

“What is the difference between flonase and nasocort?“
“Can I take metformin and simvastatin together?“