What is New Zealand Green-Lipped Mussel?

The New Zealand green-lipped mussel (lat. Perna canaliculus), which is also known as the New Zealand mussel or the greenshell mussel, kuku, and kutai, is a bivalve mollusc of the family Mytilidae (the true mussels).

It has economic importance as a cultivated species in New Zealand.

It is native to the New Zealand coast and is an essential diet of the indigenous Maori culture typically in those who live in coastal regions.

Interest in the health benefits of this mussel came from the observation that coastal Maoris people had a lower incidence of arthritis than their European or inland Maori cohorts.

In that manner, the anti-inflammatory effects of green-lipped mussel have been extensively studied.

Green-lipped mussel products have been suggested as adjunct therapies for a number of inflammatory conditions including asthma, osteoarthritis, and rheumatoid arthritis.

However, there is limited evidence for its clinical benefits for treating asthma, but the preliminary results are encouraging. Its most popular use is in relieving joint pain and inflammatory joint disorders.

While there is some evidence supporting the use of green-lipped mussel in treating osteoarthritis, the overall evidence for rheumatoid arthritis suggests inefficacy. 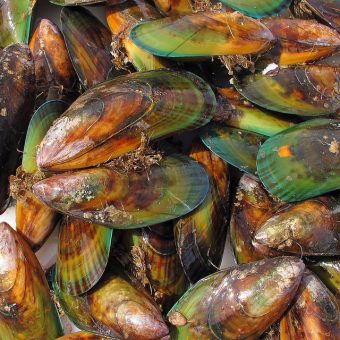 What are popular brand names for  New Zealand Green-Lipped Mussel products on the market?

Some of the most popular brand names are: 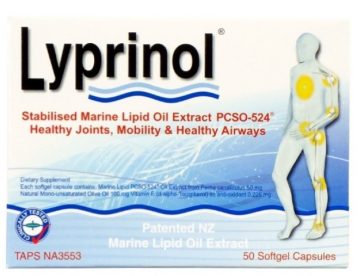 As a food or as a dietary supplement, New Zealand green-lipped mussel is not regulated by the FDA. It is also not listed in the FDA GRAS (Generally Recognized as Safe) list as a food additive.

Most of the anti-inflammatory activity of green-lipped mussel is believed to be in the lipid fraction.

According to industry, the original freeze-dried powder preparations are up to 125 times less potent than stabilized lipid extracts (such as Lyprinol R ), and many currently available powders have little or no anti-inflammatory activity.

The delipidated byproducts of the extraction process, which also have very little (if any) anti-inflammatory activity, have also been packaged and sold in low-cost green-lipped mussel products.

Recommended doses are based on those most commonly used in available trials or on historical practice. But, with natural products it often is not clear what the optimal doses are to balance efficacy and safety.

Because it often is not clear what the active component(s) of a product is, standardization may not be possible, and the clinical effects of different brands may not be comparable.

In general, according to Internet websites, oral New Zealand green-lipped mussel supplementation typically consists of about 200 mg daily of lipid extract, or 1,000 mg daily of the powdered form

For inflammatory rheumatoid arthritis, an unclear dose of Sanhelios Mussel Lyprinol Lipid Complex has been used for 12 weeks.

There is no data about  New Zealand Green-Lipped Mussel dosing in children.

According to industry, green-lipped mussel contains betain, glycosaminoglycans (including chondroitin sulphate and heparin), and 18 amino acids; these nutritional elements are retained in Lyprinol lipid extracts after processing.

Analysis showed that Lyprinol is suggested to contain more bioactive lipids than other plane or marine oils.

The anti-inflammatory effects of New Zealand green-lipped mussel have previously been attributed to a proteinaceous macromolecule or a polysaccharide/protein (glycogen) component.

However, the lipid fraction is currently believed to have the most therapeutic potential. The anti-inflammatory activity of green-lipped mussel extract is said to differ in potency depending on the preparation stability.

Extracts of green-lipped mussel proved to moderately inhibit purified COX-1 and COX-2 enzymes in vitro, in vivo, and in clinical settings.

A bioactive compound of green-lipped mussel has shown inhibition of lipoxygenase products of the AA pathway.

Lyprinol metabolites have also been shown to inhibit leukotriene B4 (LTB4) biosynthesis by polymorphonuclear cells and human monocytes.

It also may inhibit cytokine production by activated macrophages. Lyprinol has also been suggested to act as a leukotriene receptor antagonist, which may contribute to uterotrophic effects.

Some studies indicate that Lyprinol may mimic the anti-inflammatory effects of corticosteroids (e.g. as prednisone). It has been used in combination with pentoxifylline (to treat chronic inflammation in rodents.

The anti-inflammatory effects of Lyprinol have been shown to benefit experimentally induced inflammatory bowel disease (IBD) and intestinal mucositis.

An active ingredient with antihistamine activity has been isolated from green-lipped mussel but has not been thoroughly characterized.

Endocrine effects: Similar to NSAIDs (such as aspirin, indomethacin, and naproxen, which may interfere with ovulation and prolong the gestation period), green-lipped mussel extract may contain pharmacologically active material inhibiting prostaglandin biosynthesis.

Lyprinol has been demonstrated to suppress the hyperactivation of monocytes in allergic patients, which has been suggested to contribute to its antiallergy effects.

Ocular effects: Docosahexaenoic acid (DHA), the main marine omega3 fatty acid, is prevalent in green-lipped mussel; DHA is localized in the retina and may play a role in retinal function.

Green-lipped mussel seems to be generally well tolerated, and data suggest that heavy metal contamination is usually not a concern, unlike oysters.

Can Green-lipped mussel products cause allergy?

There are described allergy or hypersensitivity reactions to green-lipped mussel or other shellfish such as mollusks and crustaceans.

Studies showed that freeze-dried preparations of green-lipped mussel contain more proteinaceous allergens than lipid preparations. Allergic reactions to gelatin that are used in capsule preparations have also been noted.

Allergic reactions to green-lipped mussel may include:

Allergic or some predisposed and sensitive individuals may experience difficulty breathing after ingesting or inhaling green-lipped mussel products. Lung dysfunction and multiple respiratory symptoms have been reported in New Zealand mussel openers.

Green-lipped mussel products have been generally well tolerated however possible side effects have been described. They may be following:

Precautions and warnings during Green-lipped mussel’s products use

“How to remove skin warts with a bandage?“