What is nummular eczema?

Nummular (means coin-shaped) eczema or nummular dermatitis or discoid eczema is a rare inflammatory skin form of eczema characterized with coin-shaped/discoid and itchy spots or patches on the skin. It usually appears after a skin injury including: burns, abrasions or insect bite. 1 or many patches may affect the skin that can last for weeks or months.

The condition aims to be chronic, with reappearances and exacerbations that may last several years. The exact cause of nummular eczema isn’t known. However, the skin condition is most common among people with a history of asthma, allergies or atopic dermatitis. The prevalence of this condition is rare and is around 2 per 1,000 people. It is more prevalent in men than in women.

It can be most commonly seen in males and females of around 50-65 years of age or in women of around 15-25 years of age. It is rare in children. Nummular eczema may never be healed completely. However, it can be treated with different lifestyle changes and medical treatment. Different from other types of eczemas, it is very rare and difficult to treat. 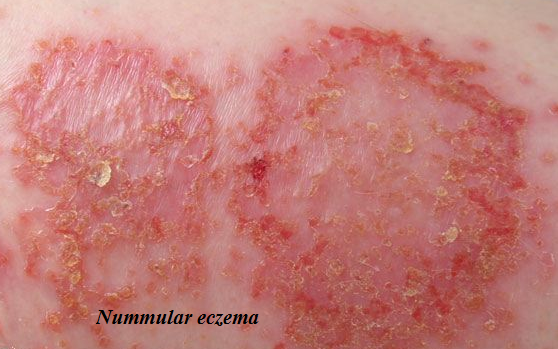 How nummular eczema looks like? What are typical manifestations?

The mechanism of nummular eczema development

There is no exact cause for defining true mechanism of nummular eczema developing, but there are some theories.

One study found that elderly patients with nummular eczema had higher sensitivity to environmental aeroallergens compared to controls. Impaired cutaneous barrier in the case of nummular eczema may also cause increased vulnerability to allergic contact dermatitis to materials such as metals, soaps, and chemicals.

The other study identified neurogenic factors that may lead to inflammation in both atopic dermatitis and nummular eczema by examining the correlation between mast cells and sensory nerves and recognizing the supply of neuropeptides compounds in the skin (epidermis and upper dermis) of patients with nummular eczema.

It has been proposed that release of histamine and other inflammatory substances from mast cells may cause pruritus due to interaction with neural C-fibers. Furthermore, substance P and calcitonin gene-related peptide fibers were obviously increased in lesion samples when compared with nonlesional samples in patients with nummular eczema. These neuropeptides compounds may stimulate release of other cytokines and further promote inflammation.

What are the possible causes of nummular eczema?

The true cause and mechanism of causing nummular eczema is yet unknown. However it has been proposed that sensitivity plays an important role in some cases. A person with nummular eczema may be sensitive to:

The best way to avoid nummular eczema is to avoid contact with substances that may lead to hypersensitivity reactions. Findings also suggest that except sensitivity the incidence of nummular dermatitis may be increased if you live in a cold, dry climate or have:

In most cases, the typical appearance of nummular eczema is quite characteristic that diagnosis can be confirmed already after physical examination. In some cases following laboratory procedures can be done in order to confirm the diagnosis:

Nummular eczema is very similar to following skin conditions, thus in order to avoid misdiagnosis, differential diagnosis should be considered:

What are the complications of nummular eczema?

What should I do to reduce nummular eczema relapses?

In order to reduce nummular eczema reoccurrence following tips may be helpful:

Apply oil such as Alpha-Keri oil or Neutrogena body oil to the skin at the end of ones shower. Vaseline is also very helpful if not too oily. Do not take more than 2 baths or shower a day. Soap may irritate and dry off the skin, so keep it away from the eczema. When bathing reduce the use of soap to the face, genital area, armpits and feet. For soap, use Oil of Olay, Cetaphil, Dove or Basis.

Avoid contact with rough clothing such as wool. Cotton clothes (100%) are recommended. When laundering, use no fabric softener, such as Kling or dryer sheets. Wash the clothes using dye free, fragrance free detergents with sign “All free” detergent. It is possible to find a treatment routine that controls nummular eczema, thus it is very important to avoid all potential materials that you are hypersensitive to.

The general guidelines for nummular eczema are:

An emollient or moisturizing cream or ointment is very important if the surface of the chronic patches is dry and scaly. These preparations should be applied to unaffected skin, especially if dryness is severe. The emollient should be continued even after the patches have cleared and the corticosteroid preparation has been discontinued.

Emollient creams are essentially moisturizers that are very important for eczema treatment. The more you use emollients the less steroid creams or other aggressive products you will need. Emollients work by filling the gaps between the skin cells so they can fill with water and swell up again.

Patients with eczema should use emollient cream very frequently, almost every hour if the skin is very dry, all over their body, even where the skin isn’t affected. Apply after bathing, while water is still trapped in the skin, for extra hydration. Emollients with a higher oil are better moisturizers but also greasy.

Those with mild nummular eczema should try light emollients such as Oilatum lotion and E45. For moderate nummular eczema, more oily products should be used such as: Aveeno cream, E45 cream, DiproBase cream, Dexeryl and Oilatum. For severe eczema Hydromol ointment, Diprobase ointment, 50/50, are recommended.

Emolients with urea for nummular eczema

Urea absorbs water to the skin. There are some studies suggesting that urea creams are more effective than typical emollients, however urea products have not been examined well in children. However, it has to be known that when urea is applied on very dry skin it can irritate the skin so you might need to apply regular emollient cream first. Products you may try are: Balneum Plus, Balneum cream, Aquadrate, Calmurid and Eucerin urea cream. 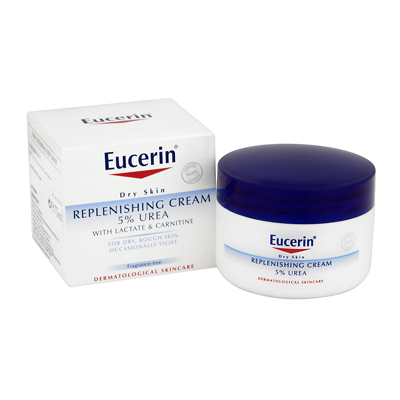