Pediophobia or “the fear of dolls” is a specific type of phobia and subtype of anxiety disorder characterized by persistent, unwarranted, irrational and intense fear or worry of dolls. Pediophobia is closely related to Automatonophobia which is general name for various types of fears such as those of ventriloquist’s dummies, marionettes, wax figures, animatronic creatures, and other humanoid figures.

Some individuals are afraid of all dolls or stuffed toys, while others are only afraid of specific ones. It appears that most intensive fear is manifested after seeing dolls that move or talk or of old-fashioned china dolls.

In normal occasions, dolls are just a child’s toys. It is known that little girls especially love their dolls and pretend to speak and play with them which according to some studies are a good thing for brain development as it can help in growing imagination and creativity.

But in some cases, different children may differently react, so some of them may be feared of them. Fortunately such cases are not so common. While most childhood cases of Pediophobia disappear once the child has grown, in some cases though, this fear can persist even in adulthood.

The first written medical description of pediophobia was noted in psychiatric literature of Rangell (1952). Although other forms of specific phobias are known to be common in the general population, pediophobia has not been reported so often.

The rarity of this phobia despite high presence of dolls in almost every culture can be explained by different frequencies of contact with stimuli (in this case doll) and a preparedness and prepotency of certain signs to provoke fear more than others do, as a result of its evolutionary history.

During last 20-30 years the incidence of pediophobia gets higher since dolls has been greatly exploited in different pop culture settings, ranging from various horror movies to Halloween events.

It can be said that an apparently harmless doll has become a conscious being bent on destruction. No matter this doll get the power from magical spells or some other occasion, the conclusion is the same: a kindly child’s plaything has become destructive and deadly thing.

So, these movies have become a primal fear and possibly one of the most important causes of pediophobia. In a world filled with threats, bioterrorism, etc., this silent/innocent-looking killer make us worry that things we cannot recognize as dangerous before could lead to our destruction.

Many may become distressed if their little child gets frightened, screams or cries when a doll is presented. However, it is important to know that small children are just learning to separate fantasy from reality, and doll they got as a present may be a strange living thing for them.

So, a doll which looks like a human can be very terrifying to a child who does not yet understand this concept. Thus, like in cases of other phobias, pediophobia won’t be diagnosed in children unless it persists for more than 6 months. Of course, if your child’s fear is severe, it is important to ask for the advice of the child’s doctor.

What are patients with pediophobia afraid of?

Patients (both adults and children) with pediophobia are most commonly afraid of:

Annabelle from movie Annabelle, Chucky from Child’s Play, the episode of The Twilight Zone are often a root causes of pediophobia. There is also even a creepy tourist attraction in Mexico known as Isla de las Muñecas, or the Island of the Dolls, where tourists go to see tumble-down old dolls strung up on trees in order to appease the spirit of a local girl who drowned.

The story gets even creepier if you find out that the man who originally organized this strange decorating project, incidentally, come to believe that the dolls are possessed. Good story for tourist attraction, isn’t it better than Dracula?

Here is one report of a mother whose girl has pediophobia:

Mrs. X daughter was very much scared of a doll with scintillating eyes. Though the doll was kept in a show-case in their household, if she saw the doll, she would scream, run away and cry out of fear for 30 minutes or so.

It was difficult for the family to soothe her. She avoided using the door near which the show case was kept. She insisted on getting rid of that doll. The child was however able to play with other toys normally. Her interactions with her family, friends and schoolmates were normal and no significant abnormality in any other areas of life was noted. No other fears were reported by the mother

The same as other phobias, pediophobia can be also triggered after some trauma or intensely negative incident in childhood connected to the dolls. The trauma will be repressed and young mind will forever link dolls with the trauma and remembering of negative feelings experienced then. Genetic factors including: brain chemistry, heredity and tendency to think negatively may also influence to the development of pediophobia

Also, some dolls are purposely made to be creepy, because of popular scary movies or Halloween. Also, some dolls are used for witch craft such as voodoo dolls. Burning voodoo dolls in order to bring misfortune to someone was a common practice in the past. So, for an individual who is already suffering from some anxiety or nervous system disorders, all dolls represent evil.

Dolls have are made to have fixed staring eyes and some of them also have button eyes that looks like “soulless pools devoid of any emotion akin to those of a corpse”.

Additionally, popular novels (Althea, Stone Dead etc) and horror movies (Annabel and Chucky in Child’s Play) have represented dolls as evil or criminal characters that come to life to cause harm to children and humans and this is never good, as it can induce fear in young or agitated minds.

Nevertheless, many adults like to scare little children and may accidentally introduce a fear of dolls in the minds of younger children most commonly by telling stories of dolls coming to life at night.

The Japanese roboticist named Masahiro Mori postulated the theory behind the development of pediophobia through his so called uncanny valley hypothesis. This scientist studied different emotional responses of persons after their notification of non-living objects with human-like features.

He hypothesized that when non-living objects such as dolls, mannequins but also his robots imitate human characteristics, we will react positively as they look similar to us.

However, when we start detecting their imperfections including the absence of breathing, dolls sitting frivolously and staring blankly at the viewer, lack of human touch, negative reactions may be triggered and we will respond with revulsion.

Such minor ‘flaws’ from these objects give us creepy feeling. According to Mori: “ The abrupt dip in emotional response that turns into revulsion is referred to as ‘uncanny valley”. The uncanny valley actually represents a tough negative response to the non-living objects that are more like humans.

The signs and symptoms of pediophobia are not typical and usually vary from person to person. Most commonly when pediophoobiac is confronted with their fear of dolls, he or she may begin to sweat, become uncomfortable or get nausea. Rarely difficult to speak or to think with clarity may be also experienced. Other patients may experience very intense anxiety, panic attacks or even paralyses.

Other signs and symptoms of pediophobia may include:

Except history and clinical representation or eventually direct fear after exposure to doll, there are no other diagnostic methods for identifying whether the person is suffering from pediophobia or not.

Following treatment options can be considered in patients with pediophobia: 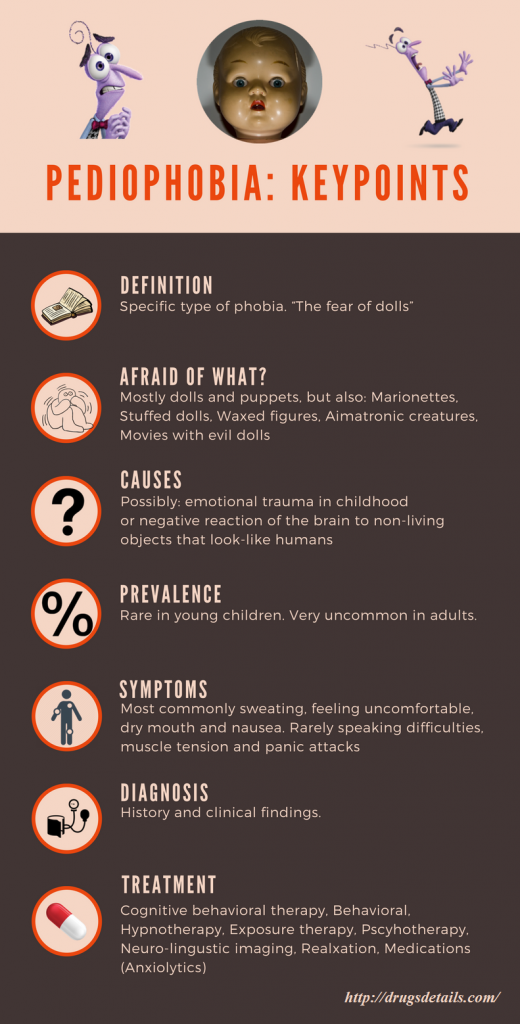 CBT focuses on altering a person’s thinking which include conversion of negative, harmful or unproductive thoughts patterns into positive and controlled ones. It eventually helps the person with pediophobia to find the difference between reality and imagination and overcome fear of dolls.

Exposure therapy is a form of behavior therapy in which the feared object (e.g. doll) is purposely brought in front of the patient. Initially, the patient will most commonly feel anxious. However, after repeated sessions and exposure to the object, the person might have better control over his/her negative feelings, which may help in reducing the fear of dolls

Relaxation techniques including: deep breathing, meditation, yoga and advanced muscle relaxation may be very helpful in relieving anxiety related with pediophobia. Other techniques such as visualization in which the person with pediophobia visualizes a comforting scene or place, may also be helpful.

Probable cause of pediophobia is emotional trauma in childhood. Hypnosis has been shown as effective treatment for many persons with phobias. It works by retrieving the underlying cause of the phobia and eliminating affected person’s response to the stimulus. The initial goal of the hypnotherapist is to discover the event from which the phobia is developed.

In most cases the cause is traumatic event which in the past. Regularly the phobic individual does not remember this past event as it can be repressed for many years. Repression is known as a protective mechanism of our mind that utilizes by keeping memory of the trauma out of our conscious until we are ready and able to deal with it.

In order to access this memory state of heightened relaxation and focus or hypnotic trance need to be achieved so unconscious can be accessed. Thus unconscious memories can be revealed and brought to conscious awareness. When this is achieved, the phobia will generally disappear.

Taking the help and advice of a psychologist or psychiatrist and talking about issues relating to the phobia can help identify the underlying cause. Regular counseling might be very helpful for a control of your feelings, moods, and behavior. This in turn may contribute in coping with pediophobia.

Pharmacological therapy with short-term anxiolytic drugs should be considered only in severe cases of pediophobia accompanied with serious distress and panic attacks. So, doctor may prescribe antianxiety medications to relieve that eerie feeling associated with dolls. However, there are no studies there suggesting that antianxiety medicines are effective in the treatment of pediophobia.

Neuro-Linguistic programming is principally the study and practice on how we create our reality. The basic concept of neuro-Linguistic programming is that the words we use reproduce an internal, subconscious perception of our problems. If these perceptions and words are incorrect, they will possibly generate an underlying issue as long as we remain to use them and to think them.

In neuro-linguistic programming sessions, therapist analyzes every word or phrase you use in telling your signs, symptoms or concerns about health. Facial expressions and body movements are also examined. After determining issues in your perception, the therapist will help you understand the predisposing source.

“Why do people have a fear of holes? How many people in the world have Trypophobia?“