Phenergan is the brand name of the drug promethazine which is used as an antihistamine, sedative, and anti-nausea medication.

In order to relieve allergy symptoms such as a runny nose, watery eyes, red eyes, or to prevent motion sickness, your doctor may prescribe you this medication.

Moreover, it can also help with allergic skin conditions or reactions to blood or plasma products.

It may be used to treat some common problems such as common cold, sneezing, cough, and runny nose.

Doctors often combine promethazine with other medications in order to relieve a sudden allergic reaction known as anaphylaxis. Phenergan is also given before or after surgery, during labor for causing the sedation in the patient.

Phenergan is sometimes also used to treat post-surgery nausea and vomiting. It can improve the effectiveness of pain medication when combined with narcotic pain medication after surgery.

Phenergan is marketed by Morton Grove Pharmaceuticals, Inc., and is available as a tablet, syrup, or a suppository to use rectally. 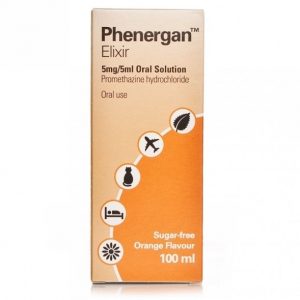 The molecular structure of promethazine: 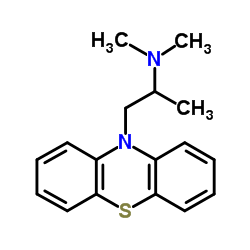 Phenergan drug class: This compound belongs to the class of organic compounds known as phenothiazines. These are polycyclic aromatic compounds containing a phenothiazine moiety, which is a linear tricyclic system that consists of two benzene rings joined by a para-thiazine ring.

Like other H1-antagonists, promethazine competes with free histamine for binding at H1-receptor sites in the GI tract, uterus, large blood vessels, and bronchial muscle.

The relief of nausea appears to be related to central anticholinergic actions and may implicate activity on the medullary chemoreceptor trigger zone.

Phenergan which contains promethazine is well absorbed from the gastrointestinal tract. After 20 minutes of oral administration, the clinical effect of the drug starts which lasts for 4 to 6 hours, and may persist as long as 12 hours.

The metabolism of promethazine is done by the liver, and after metabolism, it turns into a variety of compounds which are the sulfoxides of promethazine and N-demethylpromethazine. These are predominant metabolites that appear in the urine.

How long Phenergan stays in your system?

The elimination half-life of Phenergan is 16 to 19 hours and the elimination time of a drug is five times than that of its half-life, therefore it will be eliminated in 2 to 3 days completely.

What are the indications and usage of Phenergan?

Phenergan, either orally or by suppository, is useful for: 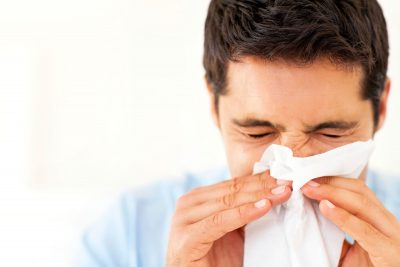 What are the contraindications of Phenergan?

What are the precautions that one should take while using Phenergan?

Phenergan needs to be used with caution because it can cause marked drowsiness or impair the mental and/or physical abilities required for the performance of potentially hazardous tasks, such as driving a vehicle or operating machinery.

The impairment can be enhanced by the use of alcohol or other central-nervous-system depressants such as sedatives/hypnotics (including barbiturates), narcotics, narcotic analgesics, general anesthetics, tricyclic antidepressants, and tranquilizers. Pediatric patients should be counseled to avoid potential harm in bike riding or in other hazardous activities.

One should also avoid the exposure to the sun. In patients with cardiovascular disease or with impairment of liver function, Phenergan Tablets and Suppositories should be used cautiously.

Can Phenergan be taken in pregnancy?

Phenergan comes under pregnancy category C, which means its risk, cannot be ruled out. There are no sufficient and adequate, well-controlled human studies and animal studies have shown the risk to the fetus or the lacking as well.

If the drug given during pregnancy, there is a chance of fetal harm, however, the potential benefits may outweigh the potential risk.

Can Phenergan be taken by nursing mothers?

The excretion of Phenergan in human milk is not known. However, Phenergan tablets and suppositories have the potential for serious adverse reactions in nursing infants, one should make a decision that whether to discontinue, breastfeeding or discontinue Phenergan administration because many drugs can excrete in human milk.

Can Phenergan be given to pediatric patients?

Phenergan tablets and suppositories are contraindicated in pediatric patients especially in patients who are less than 2 years of age. Precaution is also necessary in case of administration of Phenergan syrup in such patients.

What happens if I overdose Phenergan?

The overdose of promethazine can cause serious side effects and symptoms such as mild depression of the central nervous system and cardiovascular system to profound hypotension, respiratory depressions, unconsciousness, and sudden death. Therefore one should completely avoid overdosing on promethazine which is present in Phenergan.

The patient can also suffer from other symptoms such as hyperreflexia, hypertonia, ataxia, athetosis, and extensor-plantar reflexes.

In children, receiving a single dose of 75 mg to 125 mg orally can suffer from the paradoxical-type reaction, mainly characterized by hyperexcitability and nightmares.

What are the side effects of Phenergan?

Common side effects of promethazine include:

Serious side effects of promethazine

If you notice any of the following, quit taking your medicine and call your doctor right away:

Other symptoms that necessitate a call to your doctor include:

Get emergency help if you notice any signs of an allergic reaction such as hives, itching, trouble breathing or swelling of the mouth, face, lips, or tongue.

Can Phenergan be abused?

For achieving the sedative effects and to achieve a state of delirium, the promethazine containing substances are abused widely.

Promethazine/codeine when used with flavored soda or jolly rancher candy produces a new mood-boosting drink which is usually designed to help you unwind after a stressful day.

When using with opioids, promethazine augments opioid-induced euphoria and allows for a lower dose of opioid.

The combination formulation of promethazine can cause frequent drowsiness and tachycardia when used in higher doses.

Can Phenergan be taken for sleep?

Phenergan is used for many conditions such as allergies, motion sickness, nausea, vomiting, and anxiety before sleep and pain after sleep. It is used as a sleep aid before and after surgery.

There are many medications that you can take to sleep along with promethazine, however, you may suffer from a drowsiness which is extreme and may last longer.

Can Phenergan be taken for motion sickness?

Phenergan is also prescribed for the treatment of nausea and motion sickness, however, it causes more drowsiness and sedation as compared to other antihistamines.

Other medications that can be used are sympathomimetics which proved helpful in preventing as well treating the motion sickness.

However, they are not shown to be more superior than other medications along with addictive potential; therefore they are not as often prescribed.

Phenergan for preventing and treating the motion sickness should be used with extreme caution as it is a controlled substance and can be abused.

One can use caffeine for getting relief from motion sickness but should be used along with promethazine as it shows some other pharmacological benefits when used concurrently.

Can Phenergan be given to the patients with cardiovascular disease?

Phenergan which is a phenothiazine, after parental dose can cause hypotension including orthostatic hypotension, reflex tachycardia, increased pulse rate, syncope, and dizziness, however, these effects are rare with an oral dose.

These effects mainly occurred by low-potency agents, for example, chlorpromazine and thioridazine which subsides after few hours of administration. After severe hypotension, a fatal cardiac arrest can occur but rarely.

Therefore in patients with cardiovascular diseases, phenothiazines should be avoided or used with extreme caution.

One should monitor the patient closely for cardiovascular status, including ECG changes, is recommended at all dosages.

If parenteral therapy is given, patients should be in a supine position during administration and for at least 30 to 60 minutes afterward.

Patients who experience orthostatic hypotension should be cautioned not to rise too abruptly. Occasionally, when severe, hypotension may require treatment with vasoconstrictive agents such as norepinephrine or phenylephrine.

Epinephrine should not be used, however, since phenothiazines can reverse its vasopressor effects and cause a further lowering of blood pressure.

Can Phenergan be used with amitriptyline?

If you are already using promethazine (Phenergan) and your doctor is going to prescribe you amitriptyline, tell your doctor about the administration of this medication.

In order to take these medications safely, you may need a dose adjustment or even some special tests because co-administration of a phenothiazine with a tricyclic antidepressant (amitriptyline) may result in elevated plasma concentrations of one or both drugs as well as additive adverse effects.

In elderly patients, this combination should be used with precautions. If you have signs of bladder problems, dry mouth, stomach pain, fever, blurred vision, confusion, dizziness, or reduced heart rate, tell your doctor immediately.

Until you know how these medicines work to you, you should also avoid driving. It is important to tell your doctor about all other medications you use, including vitamins and herbs. Do not stop using your medications without first talking to your doctor first.

Can Phenergan be taken with moxifloxacin?

When administered concurrently promethazine and moxifloxacin can cause major interactions.

Moxifloxacin can increase the risk of an irregular heart rhythm that may be serious and potentially life-threatening when used with promethazine, although it is a relatively rare side effect.

In case, you are having a heart condition called congenital long QT syndrome, other cardiac diseases, conduction abnormalities, or electrolyte disturbances (for example, magnesium or potassium loss due to severe or prolonged diarrhea or vomiting)., you may be more susceptible.

You should talk to your doctor if you have any questions or concerns. Your doctor may already be aware of the risks but has determined that this is the best course of treatment for you and has taken appropriate precautions and is monitoring you closely for any potential complications.

If you develop sudden dizziness, lightheadedness, fainting, shortness of breath, or heart palpitations during treatment with these medications, whether together or alone, seek medical attention immediately.

Can Phenergan be taken with tramadol?

If medications such as tramadol administered with other medications that can cause seizures such as promethazine, it can cause increased seizures and also can increase the risk, however, such effects occur rarely.

The elderly patients are more susceptible, if they are undergoing alcohol or drug withdrawal, have a history of seizures, or have a condition affecting the central nervous system such as a brain tumor or head trauma.

In case of concerns and doubts, you should always check with your doctor.

Your doctor may be able to prescribe alternatives that do not interact, or you may need a dose adjustment or more frequent monitoring by your doctor to safely use both medications.

While being treated with these medications, you should avoid or limit the use of alcohol.

The activities which require mental alertness such as driving, or operating hazardous machinery, should also be avoided until you know how these medications affect you.

Can Phenergan be taken with clomipramine?

If you are already taking clomipramine, talk to your doctor if he is going to prescribe you Phenergan.

You should notify your doctor promptly if you have signs of bladder problems, dry mouth, stomach pain, fever, blurred vision, confusion, or reduced heart rate.

You should avoid driving until you know how these medications will affect you.

Can Phenergan be taken with doxepin?

Let your doctor know that you are taking Phenergan before taking doxepin because when taken together, they can cause an interaction.

Your doctor may need to make dose adjustment or special tests in order to prescribe you both medications together. Especially in the elderly patient, the combination should be used cautiously.

“What is the use of Raloxifene?“