It contains dextromethorphan which is an active cough suppressant. The signals that trigger the cough reflex are affected by dextromethorphan. Histamine is responsible for allergic symptoms in the body, it also has drying effects. The combination of both promethazine and dextromethorphan is used for the treatment of cough, itch, runny nose, sneezing, itchy or watery eyes that may be caused by cold or allergies.

The cough caused by serious conditions such as asthma, emphysema, chronic bronchitis, long term breathing problems, and even smoking are not treated by this medication.

What is the mechanism of action promethazine-dm?

Promethazine: Promethazine is a phenothiazine derivative which differs structurally from the antipsychotic phenothiazine by the presence of a branched side chain and no ring substitution. The lack of dopamine antagonist properties is due to this configuration. Promethazine blocks the H1 receptor and along with producing antihistaminic actions, it also shows useful sedative and antiemetic effects.

The three main characteristics of promethazine include sedative effects, the ability to treat allergies, prevention or alleviation of nausea and vomiting (antiemetic).

Drowsiness is the prominent effect of this drug. After oral administration, promethazine start showing the effects within 20 minutes which lasts for four to six hours generally, however, sometimes, it may persists for as long as 12 hours, because its well absorbed from gastrointestinal tract.

Promethazine is metabolized into sulfoxides of promethazine and N-demethylpromethazine after metabolism by liver and these metabolites are appearing in the urine.

Dextromethorphan: Dextromethorphan is an antitussive agent and it has no analgesic or addictive properties just like levorphanol. It shows similar effects of codeine in suppressing the cough reflex and acts on the cough threshold. It does not inhibit the ciliary activity.

It starts showing the effects within 15 to 30 minutes as it is also well absorbed from gastrointestinal tract. The effects of this medication last for 3 to 6 hours. There are traces of metabolites found in the urine to the human followed by oral administration.

What are the indications of the promethazine-dm?

This syrup is indicated for the treatment of temporary relief of coughs and upper respiratory symptoms associated with allergy or the common cold.

What are the side effects of the promethazine-dm?

You may suffer from severe side effects which may be sign of an allergic reaction such as hives; difficulty breathing; swelling of your face, lips, tongue, or throat, seek medical help immediately if you see any of these effects.

You should immediately stop using this medication and call your health care provider in case you see any of these serious side effects:

Keep taking dextromethorphan and promethazine and talk with your doctor if you have any of these less serious side effects:

Can you get high on promethazine-dm?

Promethazine: Promethazine present in the promethazine and dextromethorphan cough syrup is responsible for sedative and addictive properties of this medication. Yes, promethazine can also get you high. Due to its drowsiness and sedative properties, it is use recreationally along with codeine in order to get euphoric effects.

Dextromethorphan: It may produce central excitement and mental confusion. The overdose of promethazine and dextromethorphan can cause feeling of restless, severe drowsiness, dizziness, dry mouth, euphoria, large pupils, flushing. Patient may also suffer from nausea, vomiting, shallow breathing, and fainting.

Promethazine is antihistaminic but also produce sedative effect, even drowsiness is the prominent effect of this medication. People abuse this drug along with administration of dextromethorphan in order to get the feeling of euphoria, excitement and fun. Both of these drugs together produce euphoria.

Usually, promethazine with dextromethorphan is prescribed in order to treat severe cough in the form of cough syrup but people abuse this medication due to the euphoric effects produced by this combination.

When do people get addicted to promethazine-dm?

Promethazine is a medication that is easily available and not very hard to get. But getting syrup that contains promethazine and codeine is not so easy because it comes under schedule V controlled substances category and it can be abused.

Therefore people abuse the promethazine-dm in order to get the euphoric and sedative effects caused by promethazine. Abusing cough syrup that contains promethazine can lead to physical and psychological dependence. 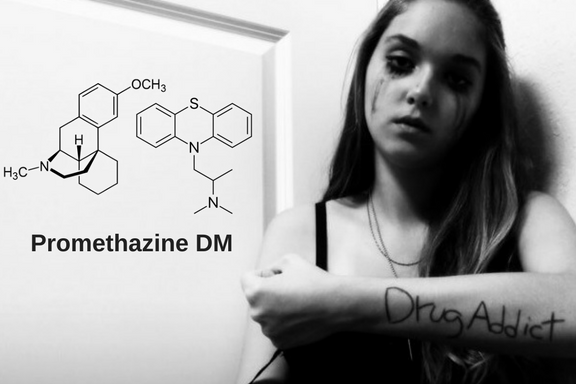 How should I know if I am addicted to promethazine-dm?

In order to know that you are addicted to cough syrups containing promethazine, you should look for these steps:

Psychological needs such as lack of control of drug use, compulsive and repetitive use, continued use despite harm, and craving for more and more drug are main characteristics of addiction. But people who are physically dependent on codeine can withdraw from it and not take it again.

What should I avoid while taking promethazine and dextromethorphan?

Along with severe drowsiness, this medication can also cause side effects that can impair your thinking or reactions. You should avoid taking this medication if you are driving or doing some heavy machinery work or anything that require constant attention and alertness.

Do people suffer from withdrawal of promethazine-dm?

Promethazine is usually abused with codeine as a cough syrup. After ceasing the syrup administration completely, mainly codeine withdrawal symptom occur; however, with passage of time, withdrawal of promethazine from the body also shows some symptoms, such symptoms can also occur in case of cessation of promethazine–dm syrup.

Similarly, dextromethorphan is also classified as a dissociative general anesthetic and hallucinogen. Generally, it does not produce any withdrawal symptoms in physical dependence, however, it may show psychological dependence.

So collectively, if we see, promethazine and dextromethorphan also cause withdrawal symptoms, which could not be very severe but can be uncomfortable.

What are the withdrawal symptoms of promethazine-dm?’

As described above, promethazine and dextromethorphan can cause withdrawal effects, they produce some common side effects together which includes:

How long does withdrawal of promethazine-dm take?

It may last for seven days or longer. Some symptoms can disappear early while some can last even longer. The withdrawal duration can be divided into three parts: first 4 days, when physical withdrawal is at its peak, patient may experience nausea, headaches and irritation like symptoms during this period and it occur due to promethazine-dm leaving the system.

What is a promethazine-dm “high” experience?

I recently got a 4 oz bottle of prometh-dm syrup, ingredients per 5ml-15mg dxm hbr, 6.5mg promethazine, and it’s 7% alcohol. This was my first time with any dxm product, hoping to make some “lean” with it, (I know this isn’t real lean but I got ripped off thinking this was codeine) I poured 2 ozs in some sprite, sipped it down and 30 minutes later I was feeling a very nice drunk/stoned euphoric, floaty high. It was very nice imo. After two successful doses of the prometh dm I was dry and decided to buy some robo. I downed around 450-600 mgs or so worth of delicious children cough syrup, and got absolutely shit out of it no buzz whatsoever. I tried robo 3 times with the same effects. I weigh around 300 lbs so why did I feel so good off less dxm in the promethazine syrup, then get no buzz off twice the dxm in robo? Could there be a slight tolerance to blame from using a few days in a row even though I’m new to dxm? Or maybe a full stomach the last couple times?

How long promethazine-dm stays in your system?

If you recently discontinued promethazine-dm medication, you are more likely to suffer from some withdrawal symptoms, described above. Then you may also wonder about the information about the complete stay of this medication in your body or you may also seek for some information about how long its sedative effects will last. Therefore, for this, you should know about elimination life of promethazine-dm.

Therefore, if we see collectively, promethazine-dm will take around 5 days to get completely eliminated from your system and also the sedative effects will also vanish within this period of time.

What is the treatment of overdose of promethazine-dm?

The treatment of overdosage with Promethazine and Dextromethorphan is essentially symptomatic and supportive. Vital signs such as pulse, blood pressure, and temperature need to be monitored in case of overdose and individual sensitivity. As a cathartic (that provide psychological relief), activated charcoal should be given by means of oral route or by lavage.

Controlled ventilation should be given in order to reestablish the adequate respiratory exchange through provision of patent airway. To control convulsions or seizures, diazepalm can be given. One should always take care of the acidosis and electrolyte losses an should be balanced and corrected. One should not give the antagonist of dextromethorphan, as the antidotal efficacy has not been established properly.

Naloxone should also not be given in order to reverse the depressant effects of promethazine. Avoid analeptics as they can cause seizures. Severe hypotension usually responds to the administration of norepinephrine or phenylephrine. Epinephrine should not be used, since its use in a patient with partial adrenergic blockage may further lower the blood pressure.

“Krokodil drug effects before and after”