What is Vyvanse and Why do people use Vyvanse?

Vyvanse is a prescription stimulant which contains d-amphetamine (also called lisdexamfetamine). In the treatment of ADHD (Attention-Deficit Hyperactivity Disorder), in children, teens and adults, a medicine is prescribed named as Vyvanse. This medication is also used to treat BED (Binge Eating Disorder). This medication is considered dangerous with potential for severe psychological or physical dependence and comes under schedule – II. 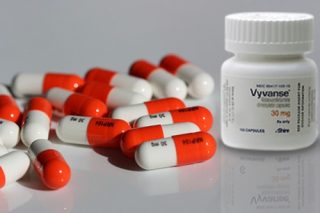 What is Vyvanse used for?

Along with treating ADHD (Attention Deficit Hyperactivity Disorder), Vyvanse also used for increasing the ability of pay attention, stay focused, and stops fidgeting.  It is also helpful in reducing the number of binge eating days.

Being a stimulant, this medication acts by restoring the balance of neurotransmitters in the brain. This medication also causes serious side effects therefore cannot be used for weight loss.

How Vyvanse works in the body?

Sympathomimetic amines are amphetamines that possess CNS stimulant activity. Vyvanse is a medication that contains lisdexamfetamine which is a prodrug of dextroamphetamine. Dexroamphetamine blocks the reuptake of the neurotransmitters (named as norepinephrine and dopamine) into the presynaptic neuron and increase the release of these monoamines into the extra neural space.

The parent drug is lisdexamfetamine does not bind to the sites which are responsible for the reuptake of norepinepinephrine and dopamine. The exact mode of action for ADHD (Attention Deficit Hyeperactivity Disorder) is not known.

Where abusers get Vyvanse?

Without prescription or recommendation of doctor, lots of young people are getting this medication in order to treat ADHD (Attention Deficit Hyperactivity Disorder). This easy accessibility of the mostly abused drug is become a matter of concern. As per a recent survey in 2016, the majority of young adults (age 18 year to 28 years) get this medications mostly from their companions or friends.

Family also contributes in the availability of this medication in about 20.5% cases, 20% from friends and around 14.8% from a dealer. It is advisable that those people who get such medication on the prescription of the doctor should maintain a proper track on their medication which is prescribed to treat ADHD mainly.

Here are some Vyvanse “high” experience described on this website: https://corpina.com/vyvanse-high/

“My doctor recommended Vyvanse. I was started out on a 30mg dose, which didn’t really do much after the first couple days. Just last week my dose was increased to 50mg. I have to say, I love this medication! It lasts all day, unlike the Adderall which I had to take a second dose in the late afternoon. It helps me focus like crazy, the first few times I took it were intense, but now I am starting to get used to it and it is has such a nice, steady, even effect.”

Vyvanse apparently has serious potential as a focus and study drug:

“Started Vyvanse approx. one year ago with intent to use it as a study aid. Literally the most effective shit ever. I took it in the AM on a day I needed to get work done. Essentially, I’d have the patience to sit in the library for 10 hours doing nothing but solid studying.”

It’s not a wonder drug, though. This same user noted that they would have to give themselves a rest, and sometimes found themselves experiencing some side effects:

“Also, I picked up on several side effects: talkative to the point where my friends would beg me to shut up, fingers/toes get cold, sweaty arm pits, euphoric ‘I have control/I’m on top of the world’ feeling, and anxiety regarding uncertainties or events (like upcoming tests/assignments).”

How is Vyvanse abuse diagnosed?

The hallmark of Vyvanse addiction is chemical dependency, for this, you don’t need to go to the doctor.

Being an abusive drug, the chances of overdose of Vyvanse is quite possible. The signs and symptoms of Vyvanse depend upon how much medication has been taken or if it is administered with combination of other drugs.

Symptoms and signs of Vyvanse overdose

Other side effects of Vyvanse overdose include:

An overdose can also lead to irritability and aggressiveness along with paranoia,or unusual thoughts or behavior.

Serious side effects of a Vyvanse overdose include:

As per a report by USFDA in 2012, out of 12, one pediatric death is caused by Vyvanse overdose.

Vyvanse is a CNS stimulant and is a known abusive medication. Even prescription drug is being misused at many places including U.S. The Good news is that the treatment of Vyvanse drug addiction is available. Physical dependence and behavioral patterns can be considered as treatment choices as they contribute most in the drug abuse.

Detoxification is the first and most important step in treating the drug addiction in which hospital staff carefully monitors the withdrawal symptoms and drug cravings. Toxins are removed from the body along with relieving the pain and discomfort. Individual therapy sessions and time for group is given as inpatient treatment after the completion of process of detoxification.

Group timings include the support group, fitness therapy, life skills classes, and individual therapy sessions. Treatment for Vyvanse addiction will also prepare you for the long-term recovery. Long term recovery benefits you in many ways such as healthy and long life without drugs.

Any abusive medication does not need to control you or your life. You can seek treatment and freedom is within reach. Without giving an another thought, if you are also struggling for better life, seek for emergency help, and let Vyvanse not get hold on you.

What are the signs that someone is addicted to Vyvanse?

One should know the signs and symptoms of Vyvanse addiction in order to prevent you from its addictive behavior. If someone is addicted to this medication, there are many signs that can be observed easily.

Some physical and emotional signs of intoxication or abuse may include

How long does Vyvanse stay in your system?

Vyvanse have an eliminated half-life of less than 1 hour. However, some data suggest it to be around 45 minutes. It means that after taking Vyvanse, in one hour, nearly 50% of taken dose will be eliminated from your body. It will take around 4.3 and 5.5 hours to eliminate the lisdexamfetamine which is the main ingredient of the Vyvanse.

The estimated elimination half life of Vyvanse in blood test is 8 to 24 hours, Urine test, about 3 days, Hair test – in one month or even longer, and saliva test – the elimination half-life is estimated to be 2 days.

“Why do you get high off lorazepam 0.5 mg if misused?”
“How does klonopin make you feel?“