Why should you take aspirin every day?

Aspirin is an analgesic, non-steroidal anti-inflammatory drug which is used widely for the treatment of fever, inflammation and mild to moderate pain.

The active component of the drug Aspirin is salicylic acid, which was initially isolated by Edward Stone from the bark of willow tree in 1763. The drug was first chemically synthesized by Felix Hoffmann at Bayer in 1897.

Aspirin is available as acetylsalicylic acid, which is a synthetic pharmaceutical aromatic homomonocyclic compound with a molecular formula C9H8O4. The drug Aspirin is chemically known as 2-(acetyloxy) benzoic acid.

It is available in the form of regular strength tablets and caplets, extra strength tablet, delayed-release tablet and quick chewable tablets for oral administration with food or without food. 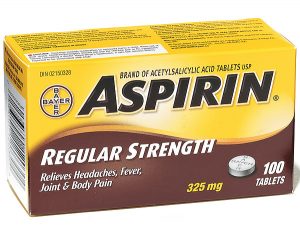 Heparin is a naturally occurring blood thinner also known as anticoagulant which is widely used to treat blood clotting during surgery. It is synthesized in the body by blood cells known as basophils and mast cells.

Heparin prevents the formation of blood clots as well as extension of existing clots within the blood. Besides this, Heparin works through induction of body natural clot lysis machinery that breakdowns the existing clots.

It is used to prevent deep vein thrombosis and pulmonary embolism (collectively known as venous thromboembolism). Heparin is widely used in the treatment of myocardial infarction, atrial fibrillation with embolization, unstable angina, acute and chronic consumption coagulopathies and as an anticoagulant therapy.

Chemically, Heparin belongs to glycosaminoglycan family of carbohydrates and made up of variably sulfated repeating disaccharide units which together form a polymer with a molecular weight ranging from 3 to 30 kDa.

Heparin sodium is not taken by oral administration and should be given by intermittent intravenous injection or deeply under the skin and as a dilute (less concentrated) solution to be injected into intravenous catheters.

The drug Heparin is enlisted in World Health Organization’s List of Essential Medicines, the most important medications needed in a basic health system.

The doses of the drug are adjusted as per the coagulation test performed approximately every 4 hours in the early stages of Heparin treatment. 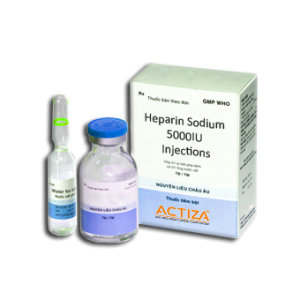 How Aspirin and Heparin work?

Aspirin is a non-steroidal anti-inflammatory drug that inhibits cyclooxygenase (COX) enzyme and therefore known as COX inhibitor agent. The action of both acetyl and salicylate components of the acetylsalicylic acid (ASA or Aspirin) and its active metabolite salicylate are liable for the anti-inflammatory and analgesic properties through inhibition of cyclooxygenases.

Antipyretic effect of ASA results from the intervention in production of Prostaglandin E1 which is a potent pyretic agent. ASA also inhibit the aggregation of platelets.

This inhibitory effect of ASA is resulted from the intervention in production of Thromboxane A2 which is accountable for the platelets aggregation.

Once activated, AT inactivates thrombin, factor Xa and other proteases involved in clotting of the blood.  Inhibition factor Xa, thrombin and other proteases result in conversion of prothrombin to thrombin, and fibrinogen to fibrin. Beside this, Heparin also prevents formation of stable fibrin clot and prolongs the clotting time. 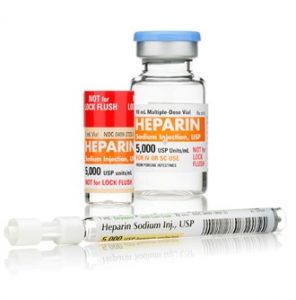 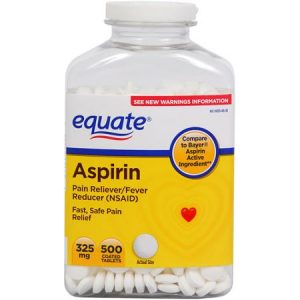 Can both Aspirin and Heparin be taken together in combination?

Yes, Heparin in combination with Aspirin represents a valuable, safe, and effective therapeutic regimen for treatment of various conditions.

The combination therapy of Heparin and Aspirin is associated with a greater reduction in the risk of myocardial infarction or death in case of patients with unstable angina compared to those treated with Aspirin alone.

The use of Heparin [low molecular weight Heparin (LMWH) or unfractionated Heparin (UFH)] together with low-dose Aspirin (LDA) also leads to significant reduction in the rate of miscarriages and causes higher rate of live births in pregnant women with a history of recurrent miscarriages in contrast to LDA treatment alone.

However, the combination therapy has not been found to be effective in case of women with antiphospholipid antibody syndrome and/or in women with late pregnancy losses.

Studies also demonstrated a better antithrombotic effect at the site of carotid endothelial injury in case of combined therapy with Aspirin and Heparin than either drug used alone when given before the injury.

The combined treatment with Aspirin and Heparin may be clinically beneficial in acute carotid thrombosis secondary to carotid endarterectomy or carotid diseases.

“Can aspirin be taken with meprobamate?“
“Is it safe to take simvastatin with coumadin?“