Is Coumadin the safest blood thinner?

Zocor is a Brand name for a drug that contain simvastatin as an active ingredient which belongs to a group of drugs called HMG CoA reductase inhibitors, also known as “statins.” Simvastatin works by reducing the levels of “bad” cholesterol – LDL (low-density lipoprotein), and triglycerides in the blood, while increasing levels of “good” cholesterol – HDL (high-density lipoprotein).

It is also used to reduce the risk of heart attack, stroke and other heart complications in people with diabetes, coronary heart disease, or other risk factors. Zocor is used in adults and children who are at least 10 years old. 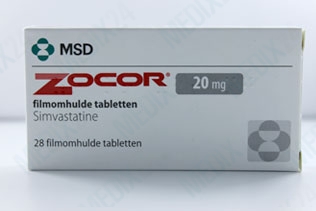 How does Coumadin and Zocor work in the body?

Simvastatin is a lipid-lowering drug that is synthetically derived from the fermentation of fungi Aspergillus terreus. It is a potent competitive inhibitor of 3-hydroxy-3-methylglutaryl coenzyme A reductase, rate-limiting enzyme in biosynthesis of cholesterol.

Interference with this enzyme activity reduces the quantity of mevalonic acid, a precursor of cholesterol. It may also interfere with steroid hormone production. Due to the induction of hepatic LDL receptors, it increases breakdown of LDL cholesterol.

Can patients take Coumadin and Zocor together?

Patients should never take Coumadin with Zocor without medical supervision. Warfarin is being co-prescribed increasingly with HMG-CoA inhibitors, such as simvastatin, for their benefits in reducing the risk of coronary events and stroke.

Many mechanisms for the interaction between Coumadin and Zocor have been postulated, including inhibition of warfarin metabolism, alteration in vitamin K availability, or protein binding displacement.

However, there are no relevant clinical data to confirm any of these. In conclusion, studies have found that concomitant simvastatin therapy results in alterations in warfarin pharmacokinetics, most likely through inhibition of the CYP450 enzymes: CYP2C9 and CYP3A4 which are responsible for the metabolism of warfarin rather than by modification of its pharmacodynamics.

Health professionals should be aware of the interaction between these commonly co-prescribed drugs and patients receiving warfarin should be monitored carefully when concurrent therapy with simvastatin is initiated to avoid over-anticoagulation and the high risk of bleeding.

The table below shows the incidence of side effects after Coumadin and Zocor administration in recommendable doses. The incidence can be increased if these drugs are taken together or overdosed.

Special precautions and warnings during Coumadin and Zocor administration: