What is Warfarin? What is warfarin used for?

Warfarin is a Generic name for an anticoagulant medicine that works by reducing the formation of blood clots. It is available on the market, both in a generic and brand name form. As a Brand name it is best known as: Coumadin, Jantoven, Rodex etc. FDA approved indications for warfarin are:

Aspirin is a Brand name for a medicine containing acetyl salicylic acid as an active ingredient. This drug reduces substances in the body that cause pain, fever, and inflammation. It is used as a mild pain and fever reducer. Aspirin also inhibits aggregation of platelets and is used in the prevention of venous and arterial thrombosis.

Aspirin is prescribed in order to prevent and treat conditions after heart attacks, strokes and to treat arthritis or inflammation.  Aspirin is available as over-the-counter (OTC) medicine and prescription medicine. It has variety brand names, but it can be also found in many combination products.

This drug is available in different forms, including: tablet, film coated tablet, chewing-gum, Rectal suppository or chewable tablet. It is available in doses of 81 mg, 325 mg and 500 mg. FDA approved Bayer Aspirin in 1965.

So, is warfarin and aspirin the same?

Aspirin works different. It is irreversible inhibitor of cyclooxygenase in thrombocytes that prevents synthesis of thromboxane A2 in platelets. Since platelets lost ability to produce new proteins, anti-aggregative effects remains during platelets life which is about 7-10 days.

Difference between aspirin and warfarin

Except their difference in mechanism of action, which is described above, there are also other differences.

Despite high therapy effectiveness compared to aspirin, warfarin has several limitations. It has many interactions with drugs and also with some foods such as leaf vegetable that contain large amounts of vitamin K1 which is warfarin’s antidote. Also, warfarin dosing has to be completely individual. To ensure that a correct and safe dose is taken, blood testing and INR counting should be performed during warfarin’s therapy. INR is value that quantifies warfarin’s activity.

A high INR value will influence patients to have increased risk of bleeding, while an INR values below the expectance may indicate that warfarin dose is inadequate to protect against thromboembolic events.

Patients on anticoagulant therapy have to carry an information card so first responders are aware of the situation. If anticoagulants are switched, this should be updated to the card or medical alert bracelet, as having the wrong data can be dangerous in patient care.

Aspirin therapy doesn’t need constant monitoring, but the patient does need to be careful about ulcers and liver damage. Certain individuals may be placed on long-term therapy including low-dose aspirin and warfarin.

Studies found that both medicines are effective for their indications. However, it has been shown that warfarin is better for strokes prevention caused by blood clots but it can increase the risk of bleeding in the brain. 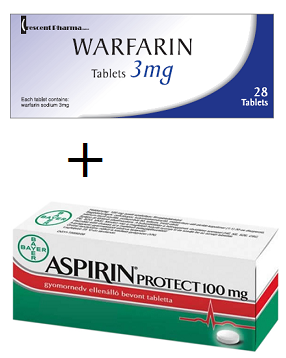 Aspirin vs Warfarin for atrial fibrillation

Atrial fibrillation is indication where warfarin shows a clear advantage over aspirin. This condition which is characterized with an irregular heartbeat rhythm may lead to forming blood clots from the heart causing stroke or heart attack.

A study in 2005 published in the “Texas Heart Institute Journal” found that warfarin can reduce the rate of recurrent stroke in patients with atrial fibrillation by 45 to 52 %, compared aspirin’s reduction rate of only 22 %. Atrial fibrillation causes about 15 % of strokes, according to the National Institute of Neurological Disorders and Stroke.

Aspirin vs Warfarin for stroke prevention

One study looked at patients with previously suffered strokes. One study, after about 6 years of treatment, found no significant overall advantage of long-term therapy with warfarin compared to aspirin for prevention of vascular events. In some patients, a slight favor of warfarin against aspirin for preventing stroke was found, but when bleeding and other side events were calculated and added the overall benefit was not significant.

Patients who had stroke once, have increased chances of having another one, but according to the National Institute of Neurological Disorders and Stroke, taking aspirin on regularly basis may reduce the risk of having a first stroke by about 25 %.

By controlling your blood pressure, blood sugar levels and cholesterol levels will also reduce your risk of stroke. The U.S. Preventative Services Task Force recommends women at ages 55 to 75 and men between the ages of 45 and 79 to take as little as 75 mg of aspirin daily to decrease their stroke risk.

Can you take aspirin and warfarin together?

Aspirin is indicated in a prevention of thrombosis in conditions associated with atherosclerosis and warfarin is indicated to prevent thrombosis in conditions associated with stasis such as atrial fibrillation. While warfarin and aspirin should not be used together, their combination has been found to be very beneficial in selected patients such as those with mechanical valve prostheses.

Several studies have also been shown that the combination of warfarin and aspirin in a low dosage of 75 to 100 mg per day may increase the incidence of minor bleeding, but this was not the case of causing major bleeding. Patients who used this drugs together may need a dose adjustment based on their prothrombin time or INR – International Normalized Ratio.

Patients should call their doctor promptly if theyu have any unusual bleeding or bruising, blood in your urine or stools, vomiting, headache, dizziness, or weakness.

“Diclofenac or Ibuprofen which is stronger?“
“What’s the difference between heparin and warfarin?“