Heparin or unfractionated heparin (UFH) is medication which is used as an anticoagulant or blood thinner in order to prevent the formation of blood clots. It is a heterogenous preparation of sulfated anionic glycosaminoglycan polymers that weights in a range from 3000 to 30,000 Da. It is a naturally released from mast cells.

This medicine comes as a solution that should be injected under your skin but it also comes as a solution for intravenous use.  You will receive your first injection at a hospital. A healthcare provider is going to show you how to give yourself the injection for remaining doses. Heparin’s FDA approved indications are:

What is Warfarin? What is Wafarin used for?

Warfarin is a generic name for an anticoagulant drug that works by reducing the blood clots formation. It is available both in a generic from and as a brand name. As a Brand name it is most commonly available as: Coumadin, Rodex, Jantoven, etc. Warfarin FDA approved indications are:

Despite high therapy effectiveness, warfarin has several limitations. Many drugs interact with warfarin and also some foods predominantly leaf vegetable foods may also as they contain large quantities of vitamin K1. Warfarin dosing has to be exclusively individual. To ensure that a right and safe dose is taken, blood testing and counting of INR (international normalized ratio) should be performed during warfarin’s therapy.

INR is value that measures warfarin’s activity. A high INR value influence patients to have increased risk of bleeding, while an INR values below the expectance and therapeutic target may indicate that warfarin dose is unsatisfactory to protect against thromboembolic events.

Heparin and Warfarin mechanism of action 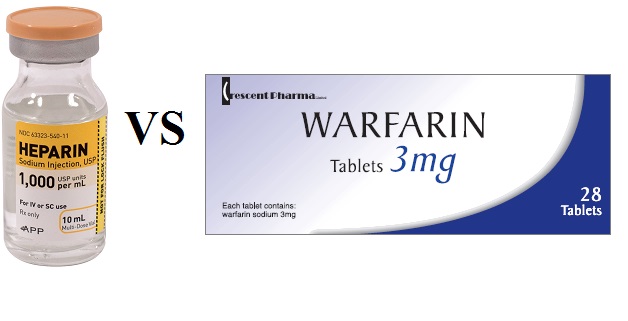 How does the anticoagulant heparin work?

Heparin’s mechanism of action is ATIII-dependent. It works by accelerating the neutralization rate of certain activated coagulation factors by antithrombin, however there are also other mechanisms as well that may be also involved. Heparin’s antithrombotic effect is correlated to the inhibition of factor Xa. Heparin is not a thrombolytic or fibrinolytic agent. It just prevents progression of existing clots by inhibiting further clotting.

Differences and similarities between Warfarin and Heparin

Structurally these medicines are different, they also work with different mechanisms however they are both used as anticoagulants.

Chemically warfarin is organic compound known as 4-hydroxycoumarins, while heparin is glycosaminoglycan polymer. Heparin and warfarin work in somewhat different ways, but both inhibit the production of cofactors that work together to help your blood to clot. Warfarin reduces blood clotting by preventing vitamin K working correctly while heparin works by preventing fibrin and thrombin, from working correctly.

Warfarin is one of the most widely used anticoagulants, but because every human differs in their physiological function, dosage requirements differ from person to person. Patients on warfarin therapy must take their blood tests on every 2-4 weeks in order to confirm that their blood is thinning to the right degree without causing bleeding complications.

INR test may be needed several times a week at the beginning of therapy to ensure that you are started on the correct dose. Generally, INR values of 2.5 to 3.0 shows that patient is receiving the correct dose of warfarin; INR values above 5.0 can be very dangerous with high risk of causing bleeding, and those below 1.0 indicate no warfarin effect.

Compared to warfarin, Heparin works faster, so it is usually given when an immediate anticoagulant effect is needed. For example, heparin is commonly given in hospitals to prevent growth of a previously detected blood clot. Heparin is also recommended for pregnant women in situations when antiphospholipid antibodies have been discovered, since warfarin may harm the unborn child.

However, heparin is never recommended for a long periods of time, as this medicine might increase the risk of osteoporosis. Usually patients are switched to warfarin when long term anticoagulant treatment is needed.

Warfarin is available only in tablet form while heparin must be given as an injection. The amount of medication that is needed differs from person to person and by different situation, and patients receiving these medications should be closely monitored by their health care providers to ensure that they are being given the correct dose.

Warfarin is not safe during pregnancy because it can cause birth defects and fetal bleeding. Women who take warfarin must be switched to heparin or low molecular weight heparin before they become pregnant, since these medicines do not cross the placenta into the fetus.

The two most serious side effects of anticoagulants including heparin and warfarin are bleeding and gangrene of the skin. Bleeding may occur in any organ or tissue. Bleeding in the kidneys usually causes severe back pain and blood in the urine. Stomach bleeding can cause weakness, fainting, vomiting of blood and black stools. Brain bleeding can cause severe headache and paralysis, and joints bleeding can cause joint pain and swelling.

Side effects, Heparin vs Warfarin

Can you take warfarin and heparin together?

Even, concomitant use of heparin and warfarin is commonly used in clinical practice, the potential for additive anticoagulant effects and increased risk of severe bleeding should be considered. Oral anticoagulants may also prolong the activated partial thromboplastin time (aPTT) in patients who are on heparin therapy, while heparin may prolong the INR values in patients receiving warfarin.

Why is heparin given before warfarin?

Heparin works faster compared to warfarin, so it is usually given when an immediate anticoagulant effect is required. It is because of the delay in factor II also known as prothrombin suppression.

Heparin is given concurrently for 4-5 days to prevent thrombus propagation. Loading doses of warfarin are not warranted and may result in bleeding complications.  For example, heparin is commonly given in hospitals to prevent growth of a previously detected blood clot.

What medications and foods should I avoid while using Heparin and Warfarin?

Antibiotic may change the warfarin’s INR test values. Always take with your doctor if you have to take antibiotic while you are on warfarin therary and always speak with your doctor before starting any new therapy.

“Can I take aspirin and heparin together during pregnancy?“