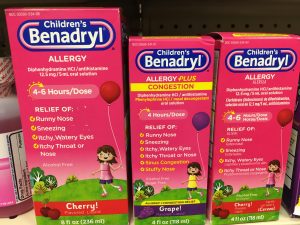 Benadryl is a brand name for antihistaminic drug called Diphenhydramine as an active ingredient. Diphenhydramine is first generation antihistamine possessing anti-cholinergic, anti-tussive, anti-emetic, anti-itch and sedative properties that is mainly used for the treatment of allergies and related symptoms of it.

Diphenhydramine was discovered in the year of 1943 by George Rieveschi, a former professor at the University of Cincinnati. In 1946 it was approved by the US FDA and first prescription was written. The active ingredient of benadryl which is diphenhydramine which is available in various forms like injectable solutions, chewable tablet, oral tablet, oral liquid, oral distingriting strip, oral capsule, disintegrating and compounding powder.

The brand is available with only two dosage form like tablet and oral liquid. It is available for both adults and children with special specifications with dose.

How much diphenhydramine is available in benadryl

How does benadryl(diphenhydramine) work in the body

Diphenhydramine hydrochloride is known to have so many potential actions like anti- histaminic, anti-muscarinic, ani-cholinergic, local anesthetic and mood alteration. One of the kind anti-histaminic has two different actions when acting centrally and peripherally. Peripherally diphenhydramine acts as allergy reducer and centrally it gives sedative effect.

Anti-histaminic: Diphenhydramine is an antagonist of H1 histaminic receptors. It is known to be member of ethanolamine class of anti-histaminergic agents. By showing antagonist effect on capillaries, it reduces the intensity of allergic symptoms. Diphenhydramine is found to be good agent to cross the blood brain barrier and H1 receptors present in brain are also antagonized giving sedative effect.

Anti-muscarinic:  It is found to be competitive antagonist of muscarinic acetylcholine receptors present in the body showing anti muscarinic effect and at high doses it acts as anticholinergic effect.

Local analgesic: Hypothesis and clinical research have proved that diphenhydramine acts as an intracellular sodium channel blocker, which is responsible for its local analgesic action. 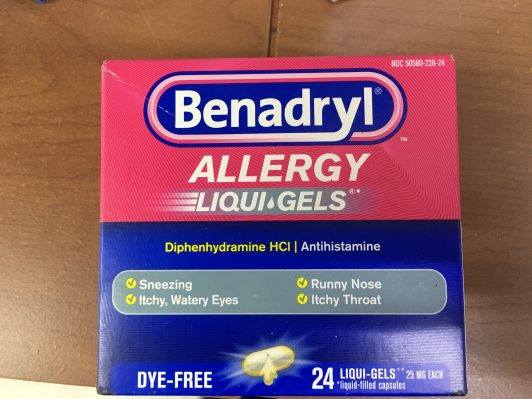 Is benadryl a sedative

Yes,  Diphenhydramine is sedative and causes drowsiness. It is the trait of diphenhydramine which is clearly mentioned in its mode of action. Diphenhyramine is an potent antagonist of H1 receptors located both peripherally and centrally.

How often can you take benadryl in a day?

What body does to Benadryl (diphenhydramine)

The diphenhydramine undergoes the process of absorption, distribution, metabolism and excretion.

Absorption: The site of absorption is found to be GI tract where it is rapidly and efficiently absorbed and distributed rapidly via blood stream to the site of action.

Distribution. The absorbed drug is widely distributed in the body and is highly bound to plasma proteins which is  about 98-99% of the drug.

How long does benadryl  stay in your body system

The drug action and reaction are conjugated product of so many reactions that are side by side going on in the body and that need to be considered properly for understanding how long drug stays in the body.

The average elimination half life of the active ingredient diphenhydramine of benadryl is reported to be in the range of 2.4 to 9.3 hours and it is known that peak plasma concentration are reached in 2-3 hours. So, it can be estimated that 100% removal of benadryl form the systemic circulation will be around 13 hours and 2 days after the final dose.

Can I take benadryl in hypertension

Yes, their is not serious interactions found by use of benadryl in hypertension. But take benadryl around controlled blood pressure as a part of caution and always let your doctor know about the medication that you are using presently whether prescribed or self medicated OTC products.

The recommended dose of benadryl varies depending upon the age and diseased state of the patient.

The symptoms from which benadryl may effectively provide relief are

Side effects of benadryl

The common side effects of the benadryl having diphenhydramine as active ingredient are:

Benadryl may also cause some serious side effects. They are:

Can I take benadryl and levothyroxine together

Yes an individual can take benadryl and levothyroxine together but if authorized by their doctor. As it is known that benadryl dose is every 4 – 6 hours where as levothyroxine has to taken early in the morning before breakfast. So, their is no serious interaction found between levothyroxine and benadryl.

“Can Azithromycin be used in combination of Artesunate? “
“Can you mix benadryl and tylenol while pregnant?“