What is camel spider? What does it looks like?

Camel spider belongs to the order of animals called Solifugae of the Arachnida class. Despite their name, they are actually not true spiders, nor scorpions.

However they are more closely related to the scorpions than to spiders. The other names for camel spiders are: jerrymugium, sun scorpion, sun spider, sand spider and wind spider.

Most of the camel spiders are found in warm and arid places like deserts all around the world with an exception of Australia. They can be most commonly found in deserts of: Africa, Iraq, Afghanistan, UAE and even Las Vegas. During the day they retreat to areas under rocks, other debris, and logs. In deserts they usually burrow themselves into the sand or soil to escape the heat. A camel spider is typically active at night.

There is a myth telling: “While under a camel, they leap into the air and disembowel it, eating its stomach” and this is how they got their name. There are also reports that camel spiders eat or chew on people while they sleep since they produce local anesthetic substance that may numb the area so people can’t feel the bites. Usually the camel spider if not threatened, is not aggressive to the humans.

However, spider camel bite is painful.

Is the bite of camel spider poisonous? What about Camel spider venom?

Solifugae including camel spiders never hunts animals which are much larger than themselves. In normal situations, camel spiders won’t attack humans.

The reason and cases of biting people is because they seek humans’ shade and they will only do that in the case of self-defence. At night camel spiders are often seen running after a spotlight or reaching a campfire.

Even if they bite us, bite is not life-threating because camel spiders don’t produce venoms, they have no venom glands and they are even not able to make spider web. However, when they bite, they can painfully injure their victim because of their strong jaws that can break any damage skin and muscles. They are also known for their cannibalistic stories, which tell that they attack desert animals and gnaw on their flesh.

Although not poisonous, camel spider bite can be terribly painful leaving severely fierce looking wound at the bite area. If not treated, it can lead to infection because of the open skin left by the bite. Wound infection may rarely cause sepsis, because camel spider chelicerae are usually covered with toxic and rotting residues of their previous preys.

If these toxic chemicals get into the blood stream they may cause serious infection. In general, the bigger the spider is, the more severe and painful the bite is. There are some reports of American soldiers who for some time didn’t know they were actually bitten due to the spider’s anesthetic bite. Some photos revealed how the human skin was intensively chewed after a camel spider bite a soldier.

Following signs and symptoms after camel spider bite are:

Because of the risk of potential infection, wound must be treated. It should be known that first aid treatment is in most cases sufficient for wound treatment, thus there is no urgent need for emergency. However, signs and symptoms should be always monitored closely and medical professional should be visited.

Follow next steps if you know that you are bitten by a camel spider:

Do I need to receive a tetanus shot after camel spider bite?

Though it is not necessary you may consider getting a tetanus shot, especially if it has been several years since you had one. So to be fully sure that everything is alright and under control, you should receive tetanus shot.

It depends, of the location of the bite, spider size, on-time treatment, health status of the individual, allergy reactions, etc. Camel spider bite should be totally healed in a couple of weeks unless there are complications. In extreme cases physician may need to scrape the area where the camel spider bite is. If this happens, prescription antibiotics and analgesic may be given. 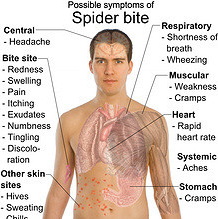