What is Pfeiffer syndrome?

Too early fusion of skull bones may prevent skull normal growth affecting the shape of a face and head. Abnormalities of skull bones may lead to high forehead, bulging and wide-set eyes, underdeveloped upper jaw and a beaked nose. More than 50% of all patients with Pfeiffer syndrome have hearing loss. Dental problems are also common.

This syndrome may also affect bones in the hands in feet causing abnormalities such as wide and deviated thumbs and toes. The thumbs and toes are wide and bend away from the other digits. Brachydactyly or unusually short fingers and toes and syndactyly or webbing or fusion between the digits are also very common. 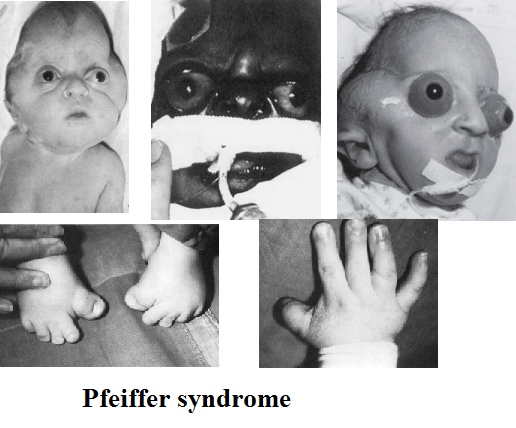 What are different names of Pfeiffer syndrome?

The disease is also commonly known as Craniosynostosis. Other names are:

According to M. Michael Cohen classification Pfeiffer syndrome can be divided into 3 types characterized by broad thumbs, broad great toes, brachydactyly, and possibly syndactyly. These types can possibly overlapping.

The early skull bones fusion can limit brain growth and development, leading to various neurological problems. Moreover, patients with type 2 or 3 Pfeiffer syndrome can have ankylosis – fusion of the bones in the elbow or other joints, which may limit mobility, and abnormalities of the face and respiratory tract provoking life-threatening breathing problems.

The main difference between type 2 and type 3 is the presence of a cloverleaf-shaped head, which is caused by more extensive skull bones fusion.

What are the causes of Pfeiffer syndrome?

Studies have been shown that the older the father is the higher are chances for new mutations causing Pfeiffer syndrome. The risk that abnormal gene will pass from an affected parent to a child is 50% for each pregnancy. The risk is the same for males and females.

Pfeiffer syndrome is usually caused by mutations in the fibroblast growth factor receptor – FGFR2 gene. Mutations in the FGFR1 gene cause a smaller number of cases of type 1 Pfeiffer syndrome. Gene mutations have not been related with type 2 or 3. The FGFR1 and FGFR2 genes are needed to provide appropriate instructions for the production of receptors known as fibroblast growth factor receptors 1 and 2.

During embryonic development these proteins signals are needed for the transformation of immature cells into bone cells. A mutation in either the FGFR1 or FGFR2 gene alters the function of the described protein, provoking prolonged signaling, promoting the premature fusion of skull, hand and feet bones. 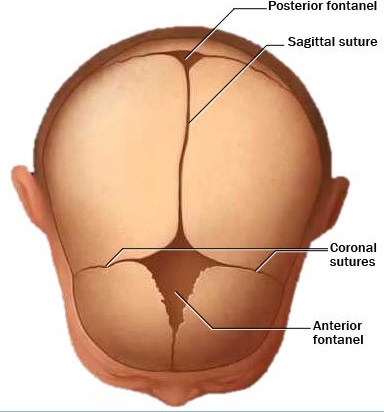 What are signs and symptoms of Pfeiffer syndrome?

Signs and symptoms of Pfeiffer syndrome may vary depending on its type as described below:

Infants with Pfeiffer syndrome type I have or may have following signs and symptoms:

Differential diagnosis should be sometimes made between Pfeiffer, Apert, Muenke, and Beare-Stevenson syndromes. Apert syndrome and Pfeiffer syndrome are notable for some similarities but the two disorders are etiologically and genetically very distinct. Crouzon and Pfeiffer syndromes are phenotypically similar but in Crouzon syndrome, hand and foot anomalies are lacking.

Phenotypic overlap may between Pfeiffer and Muenke syndrome, which is caused by a specific FGFR3 mutation. Sometimes Pfeiffer syndrome has been confused with Jackson-Weiss and Saethre-Chotzen syndromes, since broad toes may occur in both.

Can Pfeiffer syndrome be diagnosed prenatal?

The large clinical manifestation variability of this disorder even within the same family, but also with other causes of craniosynostosis might prenatal sonography diagnosis alone difficult. Thus consequent molecular analysis should be performed to confirm the diagnosis by identifying a FGFR mutation.

Pfeiffer syndrome is a complex disorder and usually involves several parts of newborn body, most commonly: face, head and limbs. Because this condition also involves the skull and face, it may also affect child’s hearing, speech, feeding and dental functions. Your child may need several treatments and surgeries to repair these anomalies.

These procedures may be very successful. Some of the following treatments options are described in further text:

This surgery is performed by releasing parts of tissue that connect the skull and bones, called sutures, through several small incisions, as a replacement for of traditional open surgery.

If minimally invasive skull repair is not an adequate option for the newborn, fronto-orbital surgery may be performed to correct the skulls when your child is between 9 and 11 months of age. This procedure is characterized by removing or repairing the fused sutures and reshaping the skull. In this procedure zigzag incision technique is used which may help to camouflage the scars and makes the incision less visible.

Pfieffer syndrome is also present with upper jaw and teeth abnormalities. These types of surgeries of the upper jaw may correct abnormalities of the maxilla (upper jaw), including the way the teeth align.

Procedure includes sectioning or cutting and repositioning of the upper jaw in order to correct its irregular position. 3D imaging technology is also used in Le Fort procedures, which may enable surgeons to create a precise surgical plan.

This procedure moves two bone segments gradually apart so that new bone may be able to fill in the gap. During this procedure, a surgeon makes a break or osteotomy in the anomalous bone and attaches the device called a distractor to both sides of the osteotomy.

This distractor is then slowly adjusted over a period of days to stretch the gap and enable new tissue to fill it in. This procedure is often done after the Le Fort advancement procedure.

Pfeiffer syndrome may also affect the position of the teeth and the fitting together of the upper and lower teeth when the jaw is closed. Many newborns with Pfeiffer syndrome may have an under bite, but also misaligned teeth. Delayed tooth eruption may also be present. Pediatric dentist specialist should be consulted when the teeth start to come in but no later than 2 to 3 years of age.

In patients with Pfeiffer syndrome, the thumbs and the big toes are usually wider than normal. This problem may not require any treatment, but it is one of the major markers to make the precise diagnosis of Pfeiffer syndrome. Although it is rare, syndactyly – fusion of the fingers or toes may also be caused. It is recommended that syndactylies should be be separated, and this is best done at experienced centers.

This separation can sometimes be synchronized with skull surgery, or other surgeries, in order to reduce the total number of operations.

In the cases of Pfeiffer syndromes, ears are usually normally shaped, but they are positioned slightly lower than normal. As a result of mid-facial hypoplasia the inner ear may not drain well, and children commonly develop otitis media, or ear infections.

Most often, children need placement of ear small tubes to prevent these infections and chronic scarring of the eardrum. In some cases, the inner ear bones may be partially fused which may lead to the conductive hearing loss.

It has been shown that almost 60% of all children with Pfeiffer syndrome have incompletely formed ear canals. In the case of type 3 Pfeiffer syndrome, almost all children have such issue.  BAHA’s – bony conductive hearing aids that are implanted into the skull may be effective treatment for such children.

However it should be delayed until children are in their teens, because the presence of BAHA’s can complicate some skull surgeries that are needed before adolescence.  Many adults with Pfeiffer syndrome have some degree of hearing loss, thus careful monitoring to the ears is important in infancy and childhood.

Timely treatment and its success is the main prognostic factor of Pfeiffer. Patients with Pfeiffer syndrome type 1 usually have normal life span compared to those with type 2 and 3. Pfeiffer syndrome is rarely encountered, even at well-known craniofacial centers. Both Pfeiffer syndrome types II and III are related with a greater risk of death early in life, and some centers have reported survival rates from 15% to 75% in childhood.

Favorable outcomes can be attained but the prognosis still remains poor in severe cases because of the risk of respiratory and neurological complications.

Many health professionals believe that a preemptory tarsorrhaphy can prevent to early visual loss and that further elevation of survival rates may be possible with aggressive airway strategies including early tracheostomies and more frequent screening such as magnetic resonance imaging for Chiari malformations.