Home » Drug Interactions » Can Azithromycin be used in combination of Ceftazidime

Can Azithromycin be used in combination of Ceftazidime

The drug is available under generic name Azithromycin and marketed under the various brand names such as Zithromax, Azithrocin and Azyth. Pfizer is accountable for the manufacturing and marketing of Azithromycin. Furthermore, Azithromycin is marketed as an ophthalmic solution under the brand name AzaSite by Inspire Pharmaceuticals.

Azithromycin is a semi-synthetic, relatively broad spectrum, macrolide antibiotic. Azithromycin plays a key role in the treatment of complication related to the bacterial infections such bronchitis, pneumonia, skin infections and infections of ear and throat.

It is also recommended to treat the sexually transmitted diseases and urinary tract infections. It is also used to prevent or treat the disseminated Mycobacterium avium complex (MAC) infection.

Azithromycin (in form of ophthalmic solution) is used to treat bacterial conjunctivitis (a bacterial eye infection).  The drug is also prescribed for the treatment of acute bacterial sinusitis caused by H. Influenza, M. Catarrhalis or S, pneumonia.

Sometime it is also used to treat the infection of H. pylori and Legionnaires’ disease (inflammatory lung infection caused by Legionella). It is also prescribed for the treatment of Whooping cough.

Azithromycin is a derivatives of erythromycin and available as a dihydrate salt. It is a semi-synthetic aliphatic heteromonocyclic antimicrobial agent with a molecular formula C38H72N2O12.

Azithromycin is available in tablet and oral suspension form for oral administration as well as in the form of ophthalmic solution. 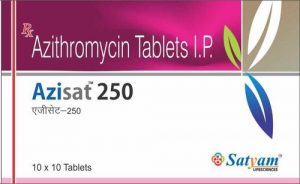 Ceftazidime belongs to the class of medications known as cephalosporin antibiotics that works by stopping the growth of bacteria. It is a third-generation cephalosporin.

Ceftazidime is derived from cephaloridine and used especially against Pseudomonas (distinguishing feature of Ceftazidime among the cephalosporins), enterobacteriaceae and other gram-negative infections.

The drug is available under generic name Ceftazidime, and marketed under the brand names Fortaz and Tazicef. The molecular formula of the drug is C22H32N6O12S2, and has a molecular weight of 636.6.

Ceftazidime is indicated for the treatment of infections caused by bacteria such as pneumonia and other lower respiratory tract (lung) infections; central nervous system infections (including meningitis that is infection of the membranes surrounding the brain and spinal cord); abdominal infections; skin and skin structure infections; blood, female genital tract, and urinary tract infections; bacterial septicemia; and bone and joint infections.

Ceftazidime is not effective against colds, flu, or other viral infections. Ceftazidime injection is available as a powder to be mixed with liquid and administered either intravenously (into a vein) or intramuscularly (into a muscle).

The drug is also available as a premixed product to be injected intravenously. The usual adult dose of the drug is 1 gram to be administered every 8 to 12 hours. The dose of the drug and route of the administration is usually determined by the medical condition and response to treatment of the patient.

The drug may be used either alone in cases of confirmed or suspected sepsis or concomitantly with other antibiotics including aminoglycosides, clindamycin, and vancomycin in case of severe and life-threatening infections and also in case of immunocompromised patient.

How Azithromycin and Ceftazidime work?

Azithromycin is a macrolides antibiotic (such as Erythromycin and Carbomycin) which acts by inhibiting the bacterial protein synthesis, quorum-sensing and formation of bacterial biofilm.

It has been observed that Azithromycin binds with the 50S subunit of ribosome and interferes with polypeptide synthesis. Therefore, it is predicted that stimulated dissociation of peptidyl-tRNA from ribosome is the major mechanism of action of Azithromycin.

Azithromycin competes for [14C] erythromycin ribosome binding site, suggesting that it binds to the same receptor as erythromycin. However, it does not affect the synthesis of nucleic acid.

The Azithromycin accumulates at very higher concentration in cells, predominantly in phagocytes and therefore delivered effectively in high concentrations to sites of infection.

Ceftazidime is a semisynthetic, broad-spectrum antibiotic for parenteral administration. The drug exerts its bactericidal effect by inhibiting the enzymes involved in the synthesis of cell wall especially penicillin-binding proteins (PBPs).

A wide range of gram-negative bacteria susceptible to Ceftazidime includes strains resistant to gentamicin and other aminoglycosides. Ceftazidime is also effective against gram-positive organisms.

Furthermore, the drug is active against many strains resistant to ampicillin and other cephalosporins. Ceftazidime has activity against the gram-negative organisms Pseudomonas and Enterobacteriaceae. 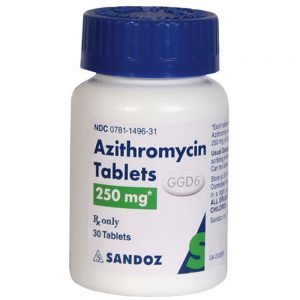 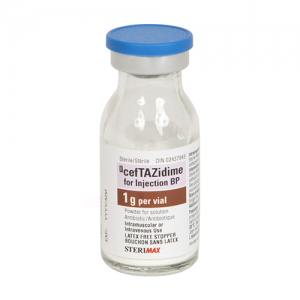 Can both Azithromycin and Ceftazidime be taken together in combination?

Yes, both the drugs can be taken together in combination. Clinical studies indicate the safety and efficacy of using the combination of the drugs in a variety of diseased states.

Clinical studies indicate that co-administration of Azithromycin and Ceftazidime results in increased bacterial clearance from blood and spleen besides delaying the mortality time in murine sepsis model by P.aeruginosa.

Azithromycin serves as a useful adjunctive therapy in the treatment of pneumonia resulting from mucoid isolates of Pseudomonas aeruginosa. Besides, Azithromycin combined with Ceftazidime displays synergistic activity against some multiresistant Acinobacter baumannii.

Comments are closed at this time.