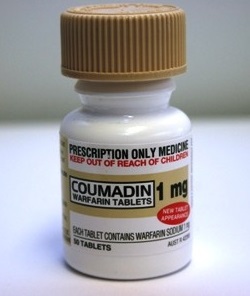 Synthroid is a Brand name for drug containing Levothyroxine (also known as L-thyroxine), a synthetic form of thyroid hormone, as an active ingredient.

Chemically it is a chiral molecule in the L-form which is identical to natural thyroid prohormone thyroxine – T4. Thyroxine is naturally secreted by the follicular cells of the thyroid gland.

Synthroids indication are: Hypothyroidism, Pituitary TSH Suppression and Adjunct therapy for surgery and radioiodine therapy in the treatment of thyrotropin-dependent well-differentiated thyroid cancer. It is also used for the treatment of decompensated hypothyroidism or myxedema coma and stupor.

Other Brand names on the market are: Most common Brand names are: Euthyrox, Levothroid, Levoxyl, Levoxine, Levothyrox, Letrox, Tirosint, and Unithroid. 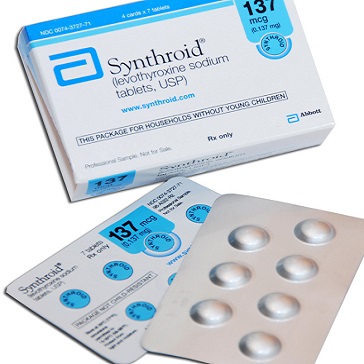 How does Coumadin and Synthroid work in the body

Levothyroxine acts by imitating the effects of body thyroid hormone thyroxine – T4, (tetra-iodinated tyrosine derivative). T4 is converted to T3 (the active metabolite) in the liver and kidney.

Can patients take Coumadin and Synthroid together

Coumadin and Synthroid Drug Interactions: If patients are currently being treated with Coumadin, they should let their doctor know before they are start taking Synthroid.

Increased thyroid hormone levels can sensitize effects of warfarin, which may increase the risk of bleeding. Patients may need a dose adjustment or more frequent monitoring by their doctor or specialist to safely use both medicines.

However, no special precautions are necessary if patients have been stable on levothyroxine therapy and are currently starting therapy with warfarin. It is very important to tell doctor about all other medications administration, including vitamins and herbs.

Prothrombin time or INR should be monitored closely when initiating, discontinuing, or changing the dosage of thyroid hormone therapy in patients stabilized on their oral anticoagulant regimen. Patients should be advised to contact their doctor if they develop signs and symptoms of excessive anticoagulation, such as: bruising, vomiting, unusual or prolonged bleeding, headache, dizziness, change in stool or urine color, or weakness.

The table below shows the incidence of side effects after Coumadin and Synthroid administration in recommendable doses. The incidence can be increased if these drugs are taken together or overdosed.

Special precautions and warnings during Coumadin and Synthroid administration: