Cefuroxime is a generic name for second generation, semi-synthetic cephalosporin antibiotic. Cephalosporins are antibiotics that are closely related to penicillin antibiotics in structure as well as in function and are chemically known as 7-aminocephalosporic acid derivatives of penicillin.

All cephalosporins contain a six-membered ring with a sulfur atom and a ß lactam ring.

Cefuroxime is antibiotic drug resistant to beta-lactamase. It is a broad spectrum antibiotic effective against a wide range of gram-positive and gram-negative bacteria, gonorrhea, and haemophilus.

It was first discovered by Glaxo, now GlaxoSmithKline, and first marketed in 1978 with the name of Zinacef. Later it was approved by USA FDA in October 1983.

Cefuroxime becomes orally active when it is converted into is an acetoxyethyl-ester-prodrug of Cefuroxime which is effective orally. 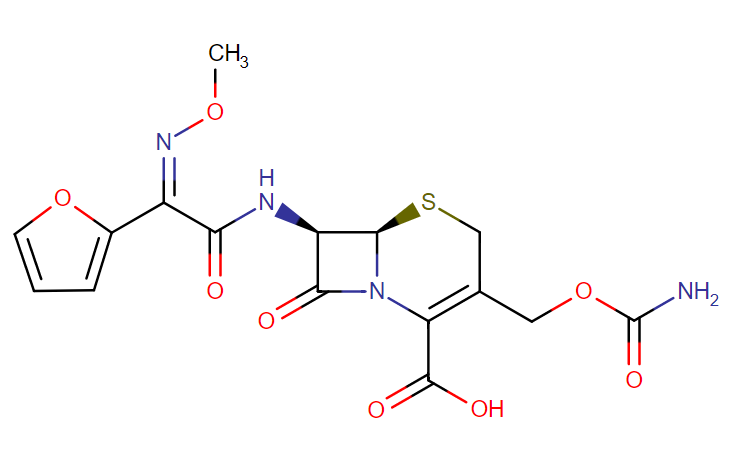 Drug class: Cefuroxime belongs to the class of organic compounds known as cephalosporin 3′-carbamates which are are cephalosporins that are substituted at the 3′-position by a carbamate group.

Like other Cephalosporins, cefuroxime has the similar mode of action as other β-lactam antibiotics (such as penicillins), but are less affected by the β-lactamases enzyme.

β-lactamase enzyme tends to destroy β-lactam ring of β-lactam antibiotics (like penicillin) and thus bacteria become resistant to that antibiotic.

The last step of transpeptidation in the synthesis of the peptidoglycan is facilitated by penicillin-binding proteins (PBPs).

PBPs proteins bind to the D-Ala-D-Ala at the end of muropeptides (peptidoglycan precursors) to crosslink the peptidoglycan.

Cefuroxime mimics the D-Ala-D-Ala site, irreversibly inhibiting PBP crosslinking of peptidoglycan resulting in a cell lysis that may occur, either through osmotic pressure or through the activation of autolysins. That’s why this group of drugs is considered as bactericidal.

The success of a penicillin antibiotic in causing cell death is related to the antibiotic’s size, charge, and hydrophobicity.

Penicillins are only eﬀective against rapidly growing organisms that synthesize a peptidoglycan cell wall.

Consequently, they are inactive against organisms devoid of this structure, such as mycobacteria, protozoa, fungi, and viruses.

As it is mentioned that cefuroxime has very good efficacy against rapidly producing bacterias so it is usually indicated in acute cases of infection. Cefuroxime is primarily indicated in conditions like

Against which bacteria is cefuroxime effective?

Cefuroxime is active against following microorganisms:

Listeria monocytogenes, Enterococcus faecalis (strain of enterococci) and MRSA are not sensitive to cefuroxime. 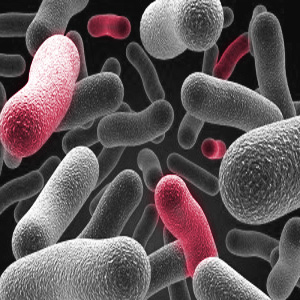 Absorption: After oral administration cefuroxime is well absorbed. Esterases enzymes, which are not present in the intestine and blood, hydrolyse it to the active form cefuroxime. Cefuroxime sodium is administered by the IM or IV route.

Cefuroxime has extensive tissue distribution. Inflammation of meninges allows it to pass into the CSF. It penetrates the placental barrier and is secreted during lactation.

Metabolism: The biological half-life of cefuroxime is about 80 minutes.

Excretion: Cefuroxime is excreted in unchanged through urine via renal route. In adults, approximately 50% of the administered dose is recovered in the urine within 12 hours.

As cefuroxime is eliminated via kidneys, the half-life is prolonged in patients with decreased renal function.

What are the contraindications of cefuroxime?

Cefuroxime is contraindicated in those patients in which there is possible chance of hypersensitivity due to cefuroxime.

Warning and precautions associated with cefuroxime

Use of cefuroxime in special population

Adverse effects associated with cefuroxime use

Less serious side effects may include:

How Cefuroxime is administered?

Cefuroxime should not be used in children younger than 3 months of age.

What are the possible drug-drug interactions with cefuroxime?

There are some possible drug interactions when cefuroxime oral tablet is taken with other medications, vitamins, or herbs. An interaction is when a substance changes the way a drug works. This changes the overall working and effect of a drug.

Examples of drugs that can cause interactions with cefuroxime are listed below:

Oral contraceptives (birth control pills) may not be absorbed well by the body after concomitant use with cefurozime. This means they may not work as well and pregnancy may occur. Other birth control management are required to avoid pregnancy during the use of cefuroxime.

Absorption of cefuroxime is reduced when after concomitant use with any antacids, due to the decrease in stomach acids. This means it may not work as well. Examples of these drugs include:

Cefuroxime should be taken at least 1 hour before antacids are taken, or 2 hours afterward. H2 antagonists and proton pump inhibitors should be avoided during treatment with cefuroxime.

Diuretic (water pill) such as bumetanide, furosemide, indapamide, hydrochlorothiazide, Lopressor, metolazone, spironolactone, torsemide, and others may effects the absorption of cefuroxime.

Resistance to cefuroxime may be caused by:

Destruction by hydrolysis of beta-lactam structure is the most predominant way of resistance to cefuroxime like other cephalosporins. Enormous amounts of Beta-lactamase are released by many gram-positive organisms.

The gram-negative bacteria produce decreased amounts of the beta-lactamase enzyme but its periplasmic position makes them more capable of destructing the cephalosporins.

Cefuroxime is more resistant to hydrolysis by the beta-lactamases formed by gram-negative bacteria than first-generation cephalosporins.

Information for patient during cefuroxime therapy

Before taking cefuroxime, inform the doctor if you are allergic to any drugs especially penicillins and other Cephalosporins, or if you have:

Any of the above conditions need dose adjustment for the safe use of cefuroxime.

The oral suspension (liquid) form of cefuroxime may contain phenylalanine. It is advised to take cefuroxime with caution if a patient is suffering from phenylketonuria (PKU).

FDA classified cefuroxime in pregnancy category B. This medication is not expected to be harmful to an unborn baby.

Cefuroxime can make birth control pills less effective, which may result in pregnancy. If you are taking contraceptive pills then inform the doctor about this prior to the use of Cefuroxime. Another form of birth control management is required in such cases.

Cefuroxime can bypass into breast milk and may harm a feeding baby. Do not use this medication without the advice of doctor if you are breast-feeding a baby.

“Can you take amoxicillin for chlamydia?”
“What is the drug terazosin used for? When should you take terazosin?“