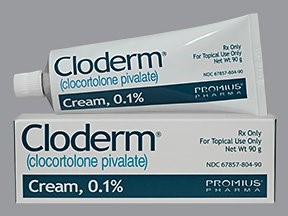 You should not use clocortolone topical on a pediatric patient without consulting a doctor because it can cause severe side effects in children as large amount of medication get absorbed by the skin in children. The growth of children can also be get affected by the steroids. Consider talking to your doctor if you think your child is not growing at a normal rate while using this medicine. 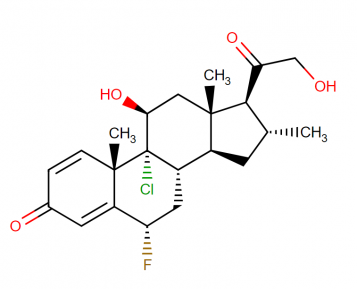 This compound belongs to the class of organic compounds known as 21-hydroxysteroids. These are steroids carrying a hydroxyl group at the 21-position of the steroid backbone.

Mechanism of action of Cloderm

In general, the precise mechanism of the anti-inflammatory activity of topical steroids in the treatment of steroid-responsive dermatoses is uncertain. However, corticosteroids are thought to act by the induction of phospholipase A2 inhibitory proteins, collectively called lipocortins.

It is postulated that these proteins control the biosynthesis of potent mediators of inflammation such as prostaglandins and leukotrienes by inhibiting the release of their common precursor arachidonic acid. Arachidonic acid is released from membrane phospholipids by phospholipase A2.

These enzyme transcriptional changes are mediated by the drug binding first to the glucocorticoid receptor. This complex can migrate to the cell nucleus which then binds to DNA initiating genetic activation and repression of various genes.

The extent of percutaneous absorption of topical corticosteroids is determined by many factors including the vehicle, the integrity of the epidermal barrier, and the use of occlusive dressings. Topical corticosteroids can be absorbed from the normal intact skin. The percutaneous absorption can be increased with inflammation or other disease processes.

What are the indications and usage of Cloderm?

Topical corticosteroids are indicated for the relief of the inflammatory and pruritic manifestations of corticosteroid-responsive dermatoses and dermatitis. 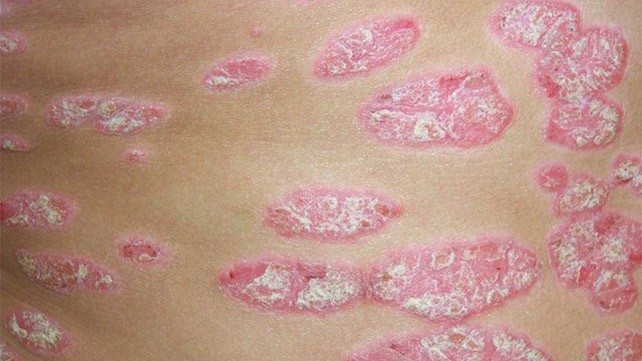 What are the contraindications of Cloderm?

Topical corticosteroids are contraindicated in those patients with a history of hypersensitivity to any of the components of the preparation.

Can I use topical Cloderm for facial dermatoses?

Can Cloderm be used during pregnancy?

Cloderm is a topical corticosteroid preparation. Corticosteroids, when administered systemically at low doses, observed as teratogenic in animals tested in the laboratory. In animals, the dermal application in higher doses, corticosteroids have been shown to be teratogenic effects.

There are no adequate and well-controlled studies in pregnant women on teratogenic effects from topically applied corticosteroids. Cloderm comes under the pregnancy category C, therefore topical corticosteroids can be used in pregnancy but only if benefit outweighs the risk. However, it should not be used for long periods of time or in extensive amounts in pregnant patients.

Can Cloderm be used in nursing mothers?

The topical administration of corticosteroids that can result in detectable quantities in milk after sufficient systemic absorption has not known. If secreted in breast milk after followed by systemically administered corticosteroids does not cause any deleterious effect on the infants. However, the while administering this medication to a nursing mother, the caution should be exercised.

How to use Cloderm in pediatric patients?

In children receiving topical corticosteroids such as Cloderm, hypothalamic-pituitary-adrenal (HPA) axis suppression, Cushing’s syndrome, and intracranial hypertension have been reported. Linear growth retardation delayed weight gain, and low plasma cortisol levels can occur as a result of manifestations of adrenal suppression in children.

What should I do in case of an overdose of Cloderm?

Topically applied corticosteroids can be absorbed in sufficient amounts to produce systemic effects. Therefore there is the lesser chance of overdose in case of topical application of Cloderm, however, if you notice an unusual side effect of this medication, call your doctor right away.

What is the dosage and administration of Cloderm?

Cloderm cream that contains clocortolone 0.1%, should be applied to the affected areas for three times a day and rub it gently. In the management of psoriasis or recalcitrant conditions, occlusive dressings can be used. The use of occlusive dressings should be discontinued in case an infection develops. Instead, an appropriate antimicrobial therapy should be started.

Can topical Cloderm be used in diabetic patients?

Corticosteroid antagonizes and suppresses the action of insulin thereby increase the blood glucose level that results in inhibition of peripheral glucose uptake and increased gluconeogenesis. Topical corticosteroids rarely produce such effects still it should be used with extreme caution in patients with diabetes mellitus, glucose intolerance, or a predisposition to hyperglycemia.

Factors such as a vehicle, the concentration of the preparation, the size of the application area, the duration of administration, and the integrity of the skin, can alter the systemic absorption of the topical corticosteroids. In order to increase the percutaneous absorption, the occlusive dressing over the applied areas should be used.

Given equivalent doses, small children are generally at the greatest risk because of their larger skin surface to body mass ratios. In children, the use of highly potent agents such as betamethasone, clobetasol, diflorasone, and halobetasol should be avoided and also the use of Cloderm should be limited to small areas for 2 weeks only in adults.

Can Cloderm be applied on diaper rash in children?

For the treatment of diaper rash, the potent topical steroids such as clobetasol augmented betamethasone, diflorasone, and halobetasol should be not be used.

Because topical corticosteroids can be absorbed systematically that also depends upon the concentration of the preparation, vehicle, the size of application or affected area, and the duration of administration. Systemic absorption of topical steroids also depends upon whether or not occlusive dressing is used.

Due to the larger skin surface to body mass ratios in children, they are at greater risk for systemic toxicity such as adrenal suppression, Cushing’s syndrome and intracranial hypertension. It is advisable that medium to low potency corticosteroids should preferably be used if topical corticosteroids are necessary to treat a diaper rash.

The affected area should be kept open, and parents should be advised not to put tight-fitting clothes or plastic pants over the rash or affected area because occlusion of treated area can increase the drug absorption percutaneously.

Can Cloderm be used in ocular toxicities?

Therefore in patients with a history of cataracts, glaucoma, or increased intraocular pressure, the topical corticosteroids should be used cautiously, more potent agents such as augmented betamethasone, clobetasol, diflorasone and halobetasol should be used in the periorbital area.

Topical corticosteroids can be absorbed systematically that depends upon concentration of the preparation, vehicle, the size of application or affected area, and the duration of administration and whether or not occlusive dressings are used. Due to the larger skin surface to body mass ratios, the small children are generally at greater risk in given equivalent doses.

What other drugs will affect the Cloderm topical?

There are very less chances that other medications that you take orally or via other routes of administration will affect the topically applied Cloderm. However, there are many other medications which interact with each other.

What are the side effects of the Cloderm?

What are the precautions that should be taken while using Cloderm?

“Is Macrobid a broad spectrum antibiotic?“