In addition, ecchymoses, are not necessarily caused by trauma often being provoked by pathophysiologic cell function, and some diseases such as Marburg virus disease. Eccyhmosis is described as a bluish or reddish discoloration of the skin often non-raised and spontaneously caused by a medical condition.

The onset discoloration of the skin is caused by escape of blood from ruptured blood vessels into the capillaries. Ecchymosis is considered as a very important physical sign and finding because it may be related with serious underlying condition. The causes of ecchymosis are various; however, there are certain parts where ecchymosis is important for etiology. 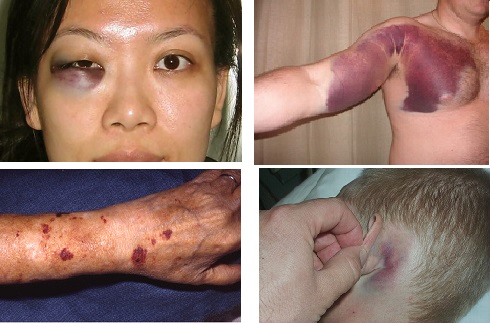 Bruise is a superficial injury produced by impact without laceration.

Hematoma is localized collection of blood that is most usually clotted. It can appear into the organ, tissue or body space due to a blood vessel wall breakage.

Hemorrhage or bleeding is the escape of blood from the vessels.

Petechia is a pinpoint, round, non-raised, purplish to red spot caused by intradermal or submucous bleeding. They are smaller than 1cm in diameter but no larger than 3mm.

Purpura is described as a small reddish purple discoloration of the skin that don’t blanch when external pressure is applied over them. Discolorations are usually small in diameter, measuring anywhere between 3-10 mm and usually have more distinct borders.

Ecchymosis is described as a large zone of skin discoloration caused by extravasation of blood into the subcutaneous tissue of the body. 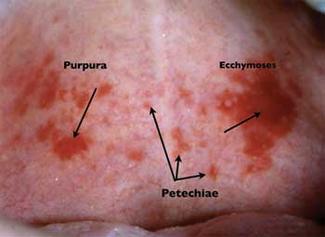 Discoloration and exact color of the skin represents the physiologic sequel of hemoglobin catabolism which is converted into bilirubin and hemosiderin. Consequently, the tissue gradually changes over time from purple/reddish/black or blue color into to a yellow and green color and at the end into the brownish discoloration. So, ecchymotic region will have different shades of color depending on differential rates of hemoglobin catabolism.

Ecchymosis caused by some internal conditions can be classified into 4 anatomical areas assigned with an eponym related to the physician who first described the physical finding:

Such classification is very important for identifying potentially serious risk of internal bleeding. Additionally, these ecchymosis signs may be potentiated by anticoagulation therapy or different platelet abnormalities.

Laboratory and imaging studies done on-time are also very important to further confirm the exact cause of the ecchymosis and guide suitable intervention. It is also important that, that despite careful physical examination, a careful review of the patient’s medications and past medical history be conducted.

During the examination of an injured patient, it is important to look for and if present, rapidly diagnose a skull base fracture because of its very high morbidity and mortality. In that case computed tomography (CT) imaging is recommended. In some cases condition may prevent prompt and adequate imaging. If skull fracture occurred, in this situation, the physician needs to rely on clinical signs and symptoms.

Two important clinical signs related with fractures of the of the skull base are raccoon eye sign (RES) and Battle sign. Both of these signs are in close connection with a high positive prognostic value for skull fractures and intracranial lesions presence.

Raccoon Eye Sign Trauma or Blepharohematoma in the frontal region of the skull may be caused by a fracture of the anterior cranial fossa and break of venous structure further leading to bleeding that may extravagate to the regions of the eyelid and orbital adipose tissue. This sign is an important predictive marker for basilar skull fractures as well as for intracranial lesions. 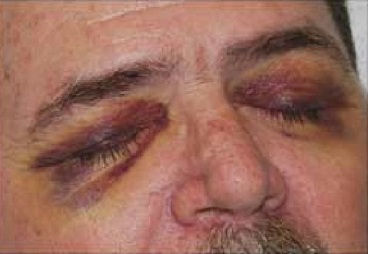 Battle Sign also known as mastoid or retroauricular ecchymosis is a potential clinical marker of the skull base fracture in the posterior cranial fossa. This sign is named after surgeon Dr. William Henry Battle (1855-1936).

According to the data, Battle sign is related with a very positive predictive value of more than 75% cases associated with basilar skull fracture so its presence should raise concern and further diagnosis and the presence of a basilar skull fracture. There are also reports without evident trauma describing a case of hepatic encephalopathy with blepharohematoma and mastoid ecchymosis.

The proposed mechanism of Battle sign manifestation is disruption of the emissary veins that are passing from the sigmoid sinus to the postauricular soft tissue. It has been showed that blunt trauma to the mastoid or temporal bone may result in longitudinal fracture inside the temporal bone.

Other causes that may lead to Battle sign are laceration of the external auditory canal, facial nerve injury, hemotympanum, and transient vertigo. Battle also described that this type of ecchymosis is often first observable 1 to 2 days after the injury and not immediately after the injury. It is likely that the patient with Battle sign will have a slower than expected recovery after head injury.

There have been various signs related with ecchymosis of the abdomen wall or retroperitoneum named after researcher who first described it. But, such signs are potentially markers of a serious internal bleeding so according to the site of discoloration they most commonly named Grey Turner sign which involves the flanks and Cullen sign which involves the umbilicus.

In 1920, George Grey Turner described “dirty-green” discoloration localized on the lateral abdominal wall in one case with acute pancreatitis. The proposed mechanism of this sign manifestation is extraperitoneal blood diffusion from the posterior pararenal space to the lateral edge of the muscle called quadratus lumborum. The presence of this sign in the case of acute pancreatitis is associated with mortality rates of nearly 40%.

In 1918, Thomas a gynecologist Stephen Cullen (1868–1953) first reported a bluish-discoloration of the periumbilical skin in a woman with a ruptured extrauterine pregnancy. The proposed mechanism of this sign is diffusion of blood from the retroperitoneum to the umbilicus within the falciform abd gastrohepatic ligamen.

So, both Grey Turner and Cullen signs describe that intraperitoneal or retroperitoneal bleeding dissects to the subcutaneous tissue covering the flanks or to the abdominal wall showing skin discoloration.

Moreover, different theories have been suggested in order to explain the chemical properties needed to develop these signs, pointing at a direct role of pancreatic enzymes on the soft tissues and abdominal wall. Approximately, it takes about 3 days for the appearance of Grey Turner’s or Cullen’s sign after the onset of pancreatitis.

The seat belt sign was described as a syndrome by Garrett and Braunstein in 1962 referring to a sustained injury involving the lumbar spine, visceral and solid organ injury, caused by the use of seat belts/lap restraints. In 1968, Doersch and Dozier described this sign as linear ecchymosis of the abdomen or chest wall after motor vehicle accident.

The location of the seat belt signs on the covers the position of the diagonal strap or lap on the seat belt during accident. The contusion is believed to be caused because of mechanistic forces directed to the abdomen or chest during braking or impact.

Groin and scrotum can be also affected. Two most signs are:

The ecchymosis in that case may be continuous or patchy, unilateral or bilateral, and may also involve the lower extremities. This sign is typically manifested 3 or 4 days after the beginning pain symptoms but may be present hours or even weeks after rupture. In some cases, the ecchymosis may look like Grey Turner or Cullen signs.

In the case of Stabler sign, rarely the blood may extravagate and provoke discoloration of the inguinal-pubic area if retroperitoneal hemorrhage occurs. This sign was first described in adult patients with acute pancreatitis with hemorrhage or in the case of ruptured ectopic pregnancy. It has been reported in different abdominal aortic aneurysm rupture.

In 1966 Fox described 2 cases where bruising was found in the upper outer parts of the thigh, caused by suppurative acute pancreatitis in first one, and a ruptured abdominal aortic aneurysm in the second one. This sign has been also described in other cases such as: strangulated ileum, reaction to subcutaneous injections, urethral instrumentation and pulmonary infarction.

Good and Pozderac described 4 patients with blood in their knees and an acute synovial rupture syndrome. Both confirmed ecchymosis that reached the ankle, forming a crescent above 1 or both malleoli. The crescent sign is defined as a presence of ecchymosis above 1 or more malleoli provoked by synovial rupture because of knee hemarthrosis.

Hemarthrosis can be caused after the trauma to the knee, after anticoagulant therapy or as a bleeding disorder usually accompanied by painful swelling of the joint. The proposed mechanism of this sign is spontaneous synovial rupture provoked by extravasation of blood over the fascial planes to the calf, extending to the ankle.

This typically results in the disappearance and resolution of the knee effusion followed by pain and swelling in the calf. Therefore, in a patient who presents with swelling and pain of the calf, deep vein thrombosis and synovial rupture should be both considered in the differential diagnoses, with presence of a crescent sign.

Although symptoms of ecchymosis are generally related with the existing condition that influenced the development of ecchymosis there are some general symptoms:

Various factors can cause bleeding under the skin. Most common causes are:

The kidney issues to perform its function regularly and excreting waste from the body may cause progression of waste products in the blood. Ecchymosis may be potentially caused when waste materials accumulate in the blood as a result of abnormalities that resulted from the degeneration of the kidney.

Liver issues such as liver cirrhosis may also lead to ecchymosis as result of alteration in the blood composition that may happen as a consequence of liver impairment.

Myelofibrosis is the fibrosis formation in the bone marrow tissue. The development of fibrosis may result to a disruption in the normal production of blood cells and thus provoke ecchymosis.

Vitamin K deficiency may also be a cause of ecchymosis, along with hemorrhage and purpura. Decrease in vitamin K-dependent clotting factors II, VII, IX, and X are the most probable reason for that. Therapy includes intramuscular injection of vitamin K 5-10mg per day for several days

Snake venom contains hydrolytic enzymes that may cause different reactions in the body manifested with systemic and local effects after snake bite. The place of the snake bite rapidly develops: redness, swelling, and also ecchymosis on the skin. Antivenin and antitetanus are good treatment choices.

Self-induced vomiting is a common cause of condition called bulimia. Hand is put into the mouth until the gag reflex is provoked and vomiting is induced. Because the hand becomes continuously rubbed against the teeth Russell’s sign may be caused manifested with crusted papules on the back of the hand. Clenching of the fist results to ecchymosis of the fingertips and bleeding underneath the nails.

Grain itch can be caused by mites seen on hay, wheat, barley, oat, and other cereals that is why farmers are mostly at risk. A small vesicle is itchy reddish papules that are commonly seen on the trunk. Sooner or later, the lesion turns into an ecchymosis once the hemosiderin settles on the site.

Ecchymosis typically manifested in kids due to an injury of the skin or mucous membrane. For example ecchymosis of the foot usually happens due to falling down while playing. Fights with peers can also give rise to Ecchymosis of the eye or black eyes in many children. The condition can also be seen in neonates. Ecchymosis in neonates may be caused due to Vitamin C deficiency or low counts of platelets – Thrombocytopenia.

Non-serious cases of ecchymosis do not need treatment and are usually resolved on their own. However, regular manifestations on the skin along with pain could be a sign of a more serious condition. In that case doctor should be consulted immediately.

The Ecchymosis management is determined by the underlying health problems. Therefore, after adequate treatment of underlying condition, ecchymosis will be resolved. Some treatment options and recommendations may include:

Medications that can be prescribed in the case of ecchymosis

Depending on diagnosed condition following drugs may be prescribed: