What is Livedo Reticularis?

Livedo reticularis (LR) is an ischemic dermopathy condition that can be described as a reticular or “netlike” violaceous mottling, surrounding a pallorous central part of the skin.

It is most commonly a sign of underlying condition but it could also be idiopathic without any certain cause. Although livedo reticularis is mostly localized on the lower extremities, the upper extremities can be also affected.

Typical physical signs are characterized by transiently acute or chronic blotchy, from reddish-blue to purple, net‑like cyanotic pattern of the skin.

Livedo reticularis is a manifestation of cutaneous disturbance of blood flow that may be caused by variety of physiologic and pathologic conditions. They may be benign for example in case of cutis marmorata of infancy, or serious, in the cases of conditions such as: vasculitis of lupus erythematous, cancers, and endocrine disorders.

Physiological livedo or cutis marmorata is commonly seen on the legs of infants and young women in cold weather that improves on rewarming.

What causes the discoloration of the skin in livedo reticularis?

The discoloration of the skin is usually caused by swelling of the venules due to obstruction of capillaries caused by small blood clots. The blood clots in these small blood vessels might be indirectly affected by a condition that increases the risk of forming serious blood clots.

Such conditions may include: hyperlipidemia, nutritional deficiencies, microvascular hematological or anemia states, hyper- and autoimmune diseases, and drugs or toxins.

What are typical signs and symptoms of livedo reticularis?

Are there any systemic issues related with livedo reticularis?

Some of systemic findings that can be related with LR may be:

Livedo reticularis may be also present as a cutaneous ulcer or livedoid vasculopathy and atrophy blanche may be a consequence. It usually affects the lower extremities. It is localized bilaterally and is more common in summer and hot climates. It may affect people of all ages groups but is more common in young women. The cause is painful papular rash that develops into an ulcer.

The ulcer gradually heals leaving a white scar or atrophie blanche that is frequently star-shaped. Livedoid vasculopathy was first originally described as a sign of vasculitis; though the definition is that it is a vaso-occlusive phenomenon with intradermal venules thrombosis.

Ehrmann in 1907 have been described two different patterns of livedo: The first one is physiological livedo reticularis (LR) and the second one is pathological livedo racemosa (LRC). The net-like rings in both types are caused by reduced blood flow and lowered oxygen perfusion at the skin peripheral segments.

The main differences between LR and LRC are that LR is a benign, primary physiologically disorder that most commonly affects young to middle-aged women. Discoloration is livid, conical and symmetric, reversible and uniform. On the other hand LRC is a secondary pathological and permanent disorder.

Physiological arteriolar vasospasm leads to reversible cutaneous discoloration in the case of livedo reticularis. Thus it usually occurs as a physiological response to cold exposure and in that case it is known as cutis marmorata, or the changes of the skin color may not be related to ambient temperature.

In the case of LRC – livedo racemosa, protracted arteriolar vasospasm, thrombosis, with or without hyperviscosity are pathological skin changes causes. Venodilatation of the venous plexus may be triggered by hypoxia or autonomic dysfunction.

An important role of the endothelial cells has also been suggested in patients with APS and LRC. It has been supposed that the interaction between APL antibodies with endothelial cells could induce LRC and may lead to increased production of procoagulant factors such as plasminogen activator inhibitor 1, tussue factor and endothelin. Increased tissue factor on endothelial cells induced by APL may be responsible, partly for hypercoagulability states.

Drug-induced LR may also happen. Amantadine has been reported to provoke LR as a result of catecholamine-induced arteriolar vasospasm.

Livedoid vasculopathy is a uncommon ulcerative subtype of livedo racemosa that may be caused due to fibrinolytic abnormalities and microcirculatory thrombosis.

Fibromyalgia and congenital hypogammaglobulinemia can be also associated with LR.

Various conditions may cause the appearance of livedo reticularis: 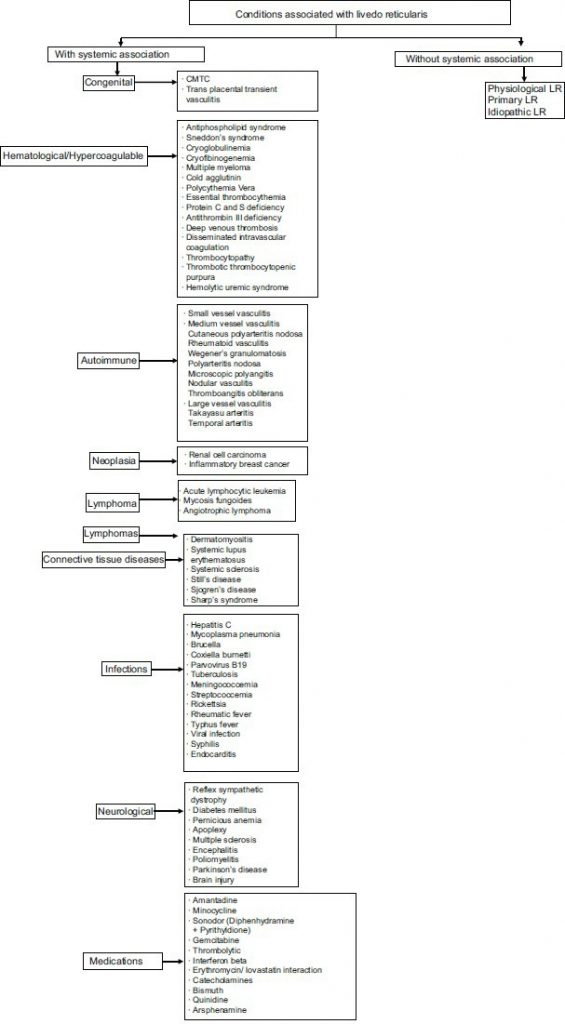 About 1/3rd of patients with SLE may have antiphospholipid antibodies; however antiphospholipid syndrome might not be present in all patients. Moreover, livedo reticularis has been also proved to be a significant sign for neuropsychiatric lupus erythematosus development.

Different studies have been demonstrated that hormonal may provoke livedo reticularis. Hypothyroidism can lead to livedo reticuaris and may be resolved with appropriate replacement therapy.

Pseudohypoparathyroidism with hypercalcemia has been also shown to cause extensive calcification and because of that may provoke ischemic skin signs such as livedo reticularis or skin infarction. Hypoparathyroidism may be also the cause. There are some findings suggesting that Cushing’s disease is also associated with livedo reticularis. Pellagra as a nutritional disorder is also associated with livedo.

Autoimmune diseases as a cause of livedo reticularis

Hypercoaguabile and hyperviscosity states as causes of livedo reticularis

Coagulopathies associated with protein C and S or antithrombin III deficiencies are also related with livedo reticularis. Homocysteinemia and homocysteinuria are conditions commonly related with disruption in methionine metabolism that may lead hypercoagulability. Homocysteine levels may also be increased in blood and urine.

Polycythemia vera is also considered as a cause of LR. It is a condition in which flow is slow down through the cutaneous microvasculature. Increased viscosity of red blood cells in polycythemia vera may result in livedo reticularis. Moreover cutaneous findings may include erythromelalgia, ruddiness of the face, and rarely acral cyanosis.

Paraproteinemia and multiple myeloma increase in circulating immunoglobulins also leads to slower flow and may result in LR.

Embolic diseases as a cause of livdo reticularis

Amantadine as a cause of livedo reticularis

Amantadine has been shown to be associated with livedo reticularis. The proposed mechanism may be the combination of catecholamine-induced vasospasm and the amantadine effects on NMDA receptors in the skin. The livedo usually resolve after amantadine withdrawal.

Minocycline as a cause of livedo reticularis

Long-term minocycline administration has been reported to induce a polyarteritis nodosa-like syndrome characterized with fever, arthritis, fatigue, livedo, and positive p-ANCA. Discontinuation of minocycline use usually results in resolution.

Infections as a cause of livedo reticularis

Different infections such as: syphilis, mycoplasma, tuberculosis, brucella, hepatitis B and C, streptococcemia, and different viruses.

A detailed medical history is very important to recognize if there are any cases related with systemic disease. Following questions may be helpful for best anamnesis of LR:

Is there a present or a history of some autoimmune disease? Are there any symptoms to propose autoimmune disease? Livedo reticularis may be a manifestation of underlying autoimmune condition such as systemic lupus erythematosus (SLE), scleroderma, dermatomyositis, acute rheumatic fever, or rheumatoid arthritis.

Is there a history of chronic renal disease? Livedo reticularis may be caused if calciphylaxis is present.

Does patient have any bacterial or viral infection recently? Mycoplasma, hepatitis C, syphilis, parvovirus, pneumococcal sepsis, meningococcemia, and tuberculosis bacillus have all been associated with LR

Have any new drugs been initiated? Amantadine, norepinephrine, interferon, minocycline and quinine represent the most usually reported causes of drug-induced livedo reticularis. Rarely, gemcitabine, heparin, and bismuth have also been reported to induce livedo reticularis.

A detailed systemic review can also be helpful in uncovering any systemic conditions such as autoimmune disease.

Characteristically livedo reticularis findings during physical examination may be:

Since sampling errors are common during biopsy procedure, sensitivity is very poor. In order to capture medium-sized vessels incisional biopsy to fascia should be considered. Ideally, the sample passes through the blanched as well as bluish parts.

Secondary livedo reticularis may include following tests for next conditions:

What is Cutis marmorata telangiectatica congenita?

This rare condition is present at birth and is usually localized only to one lower extremity, though it may be also found on the abdomen or be generalized. Telangiectasias as well as other vascular anomalies may be also present. Limb or body asymmetry may also be present. Cutaneous findings usually aim to recover spontaneously over first few years of life.

If there are no systemic manifestations of livedo reticularis then therapy except avoiding cold is not needed as physiological or primary LR usually is resolved spontaneously. Use of compression stockings and limb elevation may be helpful.

Vasodilatators drugs may also be considered for a short-term use. Nifedipine, calcium-channel blocker has been shown to be effective for Raynaud’s phenomenon, so it may be also effective for vasospastic livedo reticularis.

Pentoxifylline is a vasodilatator that increases deformability of erythrocytes and may also reduce platelet aggregation and activation thus it may be beneficial in primary or secondary LR. As a last option, short-term vasodilator therapy may be given off-label in the patient for cosmetic purpose.

Therapy for Livedo racemosa should be directed according to underlying disorder. Patients with livedo racemosa and the antiphospholipid antibody syndrome with thrombosis need anticoagulation therapy.

Treatment of livedoid vasculopathy is not promising but potentially beneficial drugs may include different anticoagulants and antiplatelet agents, pentoxifylline, immunosuppressants, danazol, and tissue plasminogen activator. The combination of hyperbaric oxygen, psoralen and ultraviolet A light therapy have also been shown to be successful in cases with livedoid vasculopathy.

Inflammatory manifestations of LR should be treated with anti-inflammatory agents, including NSAID-s, systemic corticosteroids and systemic immunosuppressants.

Treatment of hyperviscosity conditions such as Polycythemia vera should be focused on maintaining a low hematocrit. Thus, phlebotomy alone is effective though patients may also receive hydroxyurea or anagrelide. A low-dose aspirin may be also helpful.

If cholesterol embolism is doubted as the underlying cause of livedo reticularis, long-term management is directed toward removing and modifying precipitating risk factors. Anticoagulants use in that case is controversial, since it may disrupt fibrin caps that hold cholesterol plaques in place attached to the vessel wall.

The treatment of Sneddon syndrome is also controversial. Corticosteroids have been proved to be ineffective. Generally, anticoagulation therapy is recommended. Management should be coordinated with rheumatology and neurology.