What is Eliquis (apixaban)?

Eliquis is a Brand name for a drug containing apixaban as an active ingredient. Apixaban belongs to the class of drugs that are known as inhibitors of coagulation factor Xa.

It works by blocking the action of body substance that helps forming the blood clots. It is used to help preventing the blood clots and strokes in patients with atrial fibrillation that is not caused by heart valve disease.

Atrial fibrillation is a health condition with irregular heartbeats that can increase the chance of clots forming in the body and possibly causing strokes. 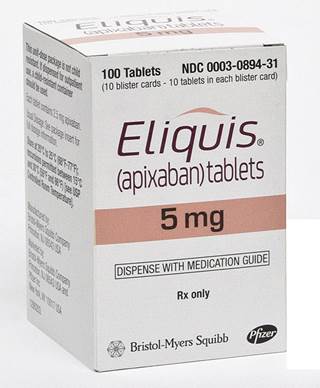 Why is Warfarin prescribed?

Warfarin is an anticoagulant (or blood thinner) drug. This medicine works by preventing the formation of blood clots as well as their migration by inhibiting vitamin K-dependent coagulation factors.

In 1950s, studies found that warfarin is relatively safe and effective for prevention of thrombosis and thromboembolism in many disorders. In 1954., it was approved for use as a medicine and has become very popular ever since.

Warfarin is the most widely prescribed oral anticoagulant drug in North America Warfarin indications are: treatment and prophylaxis of venous thrombosis and pulmonary embolism as its extension, treatment and prophylaxis of thromboembolic complications associated with atrial fibrillation and/or cardiac valve replacement, reduction of recurrent myocardial infarction and thromboembolic events (such as stroke or systemic embolization) after myocardial infarction and therefore the reduction the risk of death.

Most common Brand names for warfarin products on the market are:

How does Warfarin and Eliquis (apixaban) work in the body?

Apixaban acts by inhibiting the process of coagulation, and therefore prevents progression of blood clots. The results of FXa inhibition are prolonged clotting tests such as The International normalazed ratio (INR), prothrombin time (PT), and activated partial thromboplastin time (aPTT).

Changes observed in these clotting tests at the expected therapeutic dose, however, are small, subject to a high degree of variability, and not useful in monitoring the anticoagulation effect of apixaban.

Difference between Warfarin and Apixaban

Not too long ago,there were not many choices for doctors to choose blood thinner drug for the prevention of stroke. Warfarin (Coumadin) was the only way to go.

However, in the past 3 years, though, three new anticoagulants have been approved by FDA for atrial fibrillation and one of them was apixaban with a Brand name Eliquis.

Health professional says that warfarin is very difficult drug to take, because the optimal dose varies from person to person, and it is strictly based on individual aspect.

Dosage can vary on age, diet and other medications being taken at the same time. The dosing is also hard to choose. If it is given too much, the risk of bleeding rises, sometimes very dangerously.

If it is given too little, the stroke risk remains. Prothrombin time or INR should be monitored closely in patients on Coumadin therapy, and in many cases therapy need dose adjustment.

Patients must get blood tests on monthly basis or even more often and watch their vitamin K intake. Vitamin K can be found in foods such as kale spinach and chard.

Patients should also take care about of Vitamin K amount that is taken, because too much vitamin K in the blood can lessen the effectiveness of warfarin. So patients should have to keep the level of their vitamin-K constant, and at a fairly moderate level.

With new drug such as Eliquis, there is no longer a requirement for constant surveillance, blood tests and dietary issues. Studies have found that besides lowering the risk of stroke, Eliquis (apixaban) is associated with a lesser likelihood of bleeding that could be very troublesome and life threatening such as intracranial hemorrhage or brain bleeding, a very known side effect of warfarin.

For Eliquis there’s is no antidote for overshooting, unless giving the fresh plasma, which has its own risks. High blood levels of Eliquis can become an issue if a patient needs emergency surgery, as bleeding risk would be raised.

Also, warfarin has big list of interactions with other drugs taken at the same time while this is not the case for Eliquis. There are some drugs that should not be mixed with Eliquis, but not nearly as many as with warfarin.

There are also pharmacokinetic differences between these two drugs. Warfarin is rapidly absorbed following oral administration with considerable interindividual variations while Apixaban is absorbed in the stomach and small intestine and the absolute bioavailability is about 50%.

Warfarin is 99% bound primarily to albumin while Apixaban is about 87% plasma protein bound. The warfarin elimination is almost entirely by metabolism.

Very little warfarin is excreted unchanged in urine while 25% of the apoxiban administered dose is eliminated in the feces and urine. Half-life of R-warfarin is 37-89 hours and for S-warfarin is 21-43 hours while for apixaban is about 12 hours.

One big study of more than 18,000 patients comparing Eliquis with warfarin showed that those on Eliquis were 21% less likely to have a stroke.

However, all additions of Eliquis as a new member of blood thinner family that have some benefits over the old warfarin shouldn’t mean that patients should drop their warfarin prescription.

Patients should stay on warfarin if they have kidney failure. The same goes if they have mechanical heart valves, because new medicines such as Eliquis may not be safe for those situations.

Also, if warfarin works well, if patients are stable, don’t have bleeding problems doctor might not suggest a change and there is no a compelling reason to switch therapy.

The table below shows the incidence of side effects after Warfarin administration in recommendable doses. The incidence can be increased if warfarin is overdosed.

The table below shows the incidence of side effects after Eliquis administration in recommendable doses. The incidence can be increased if Wliquis is overdosed.

Special precautions and warnings during Warfarin and Eliquis administration:

“Azithromycin and Rifampin for chlamydia“
“Sporanox and Zocor together“