Fentanyl is a Generic name for a very potent opioid drug that has a rapid onset and short duration of action that is used to treat severe chronic, “around-the-clock” pain.

It should be used only for patients who have toleration to opioids drugs or who are already taking opioid pain medications regularly, such as morphine or oxycodone. Fentanyl is also used as an adjunct therapy to general anesthetics, and as an anesthetic for induction and maintenance. This synthetic substance is 50-100 times potent than morphine. It works primarily as a strong agonist of mu – opioid receptors.

Actiq is a Brand name for lozenges that contain fentanyl; Abstral is a sublingual tablet,  Onsolis is a film that’s applied to the inner lining of the lip or cheek, Fentora is a buccal tablet, Lazanda is a nasal spray, and Subsys is a sublingual spray. 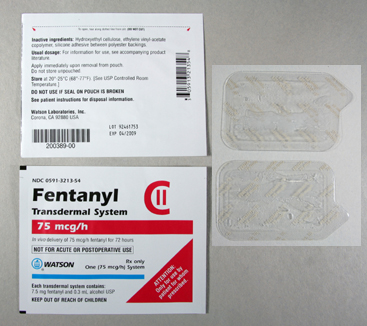 How long does Fentanyl stay in your system?

The elimination half-life of fentanyl depends on the way of its administration.  If it is administrated intravenously it will result in quicker elimination from plasma compared to transdermal or transmucosal formats.

To summarize, intravenously administrated fentanyl will be rapidly eliminated after discontinuation.  The transdermal and transmucosal forms of fentanyl will take longer time to eliminate, but both will be out the body within 5 days after discontinuation.  However, it is likely that the transmucosal fentanyl has a faster elimination than the transdermal form.

What factors may influence on how long Fentanyl stays in your body?

Many factors may have an impact on Fentanyl elimination from the body. Those factors can be following:

Fentanyl’s most common side effects include:

Less common side effects after fentanyl use which may be severe, include:

Rare side effects that are also reported after fentanyl use may include:

Discontinuing fentanyl suddenly may result in withdrawal symptoms such as:

Fentanyl may interact with:

“How long does LSD stay in your system for drug test?”
“Can I give my child benadryl and Sudafed?“