Plan B is a Brand name for “morning-after pill” (which certainly means that you should not wait until morning to take it, it is the best to take it as soon as you can) that contains a synthetic progestational hormone named levonorgestrel. Levonorgestrel is a female hormone that prevents ovulation.

This hormone also causes changes in uterine and cervical mucus lining by making it tougher for sperm to reach the uterus and harder for a fertilized egg be impregnated into uterus.  Plan B is used in order to prevent pregnancy after unprotected sex or when other forms of birth control failed such as condom breakage, or missing 2 or more birth control pills.

To obtain optimal efficacy of this medicine, the first tablet has be taken as soon as possible within the maximum of 72 hours after intercourse. The second tablet should be taken 12 hours later.  If you take it within 72 hours after unprotected sex, this medicine can reduce pregnancy risk by up to 89%. If medicine is taken within 24 hours, it is about 95% effective.

Plan B tablet is manufactured as a round and white tablet containing 0.75 mg or 1.5 mg of hormone levonorgestrel, marked with name INOR on one side. Levonorgestrel was synthesized in the 1960s and was approved in birth control products since 1980s.

How Plan B works in the body?

Levonorgestrel an active ingredient of Plan B is a synthetic form of the naturally occurring female sex hormone called progesterone. During menstrual cycle, an egg matures and ovaries release the egg. After that, ovary produces progesterone, thus preventing the release of further eggs and preparing the lining of the womb for a possible pregnancy.

If pregnancy occurs, body produces progesterone in high amounts, maintaining the womb lining. If pregnancy does not occur, progesterone levels fall, resulting in a menstrual period. Levonorgestrel works by tricking the normal body processes by making that ovulation has already occurred and by maintaining high levels of the synthetic progesterone. This results in prevention of eggs to be released from the ovaries.

From pharmacology standpoint, levonorgestrel works by binding to the progesterone and estrogen receptors. Target cells are located in female reproductive tract, the hypothalamus, the mammary gland and the pituitary gland. Once bound to the receptor, levonorgestrel slow down the frequency of gonadotropin releasing hormone (GnRH) release from the hypothalamus and blunt the pre-ovulatory luteinizing hormone – LH surge.

How long does Plan B hormones(the morning after pill) stay in your system – Blood, Breast milk, Urine, Saliva, Hair

Levonorgestrel’s elimination half-life time is estimated to 24.4 hours +/- 5.3 hours.  This means that 50% of administrated drug will be eliminated from the body for about a day after ingestion.  So if the average half-life time is 24.4 hours, it can be estimated that it would take about 5.6 days to completely eliminate a single dose of Plan B from your blood.

But some findings have revealed that there is a deviation of 5.3 hours deviation among most users.  This means that some woman may exhibit elimination half-lives of nearly 19 hours while others may exhibit half-lives nearly to 30 hours. 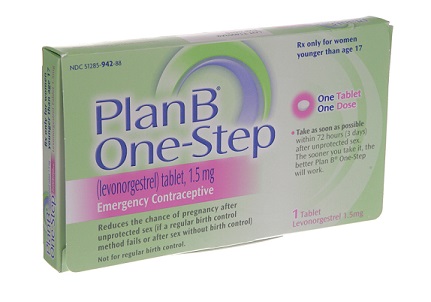 What factors may influence on how long Plan B will stay in your system?

Many factors may have an impact on methadone’s elimination from the body. These factors may include:

Taken dose of Plan B.

The greater dose of Plan B is taken, the longer it may take to clear levonorgestrel from the body system.  Findings showed that when levonorgestrel is taken at low doses such as those from 0.15 mg to 0.25 mg, levonorgestrel’s elimination half-life is significantly reduced compared to the standard dose of 0.75 mg.  Half-lives of 0.15 mg and 0.25 mg doses were estimated at a range from 9.9 to 13.2 hours respectively.

Levonorgestrel is highly lipophilic as it contain cholesterol like structure, which means that it is likely soluble in fats.  So it is common that it will accumulate among obese or in those with a high percentage of body fat, especially when it is administered more frequently than ususal.

Although researchers suggested that CYP3A4*1B and CYP3A5*3 gene’s polymorphisms may alter levonorgestrel’s metabolism and elimination there is no true evidence that supports this theory.

Woman with hepatic impairment as a result of a condition like cirrhosis will be unable to efficiently metabolize levonorgestrel.  Reduced metabolism of levonorgestrel will likely increase plasma concentrations and prolong elimination after administration.

Levonorgestrel is primarily excreted through the kidneys.  Those with compromised kidney function may retain levonorgestrel metabolites in the body for a longer time than usual.  Renal impairment may cause accumulation of drugs prior to their elimination which further may contribute to reabsorption and redistribution of the drug throughout the body.

Concomitant use of other drug or substances

Levonorgestrel is metabolized by CYP3A4 and CYP1A2 isoenzymes in the liver. Inhibitors of those isoenzymes such as ritonavir and fluvoxamine may increase the risk that the drug will remain longer in the body because of reduced metabolism. On the other hand, inducers of same isozenymes such as modafinil or tobacco may accelerate metabolism of levonorgestrel leading to faster elimination.

Plan B side effects

Although Plan B is an incredibly useful it can provoke unwanted side effects very commonly such as:  headaches, breast tenderness, menstrual irregularities and nausea.

Plan B may cause following side effects with following incidence:

“Can methadone delay your period?”
“How long does it take for fentanyl patch to be out of your system?“