Lovastatin belongs to a group of drugs called the statins drugs, also known as HMG-CoA reductase inhibitors. It is a fungal metabolite isolated from Aspergillus terreus cultures. Lovastatin is a potent anticholesteremic agent that works by inhibiting HMG-CoA reductase but also works by stimulating LDL receptors production in the liver.

It is used to lower cholesterol levels in the body. In combination with diet, exercise and weight loss, lovastatin may reduce the risk of heart attack, stroke, and other cardiovascular disorders.

Lovastatin is present in small amounts in foods such as oyster mushrooms and red yeast rice. Lovastatin comes in a tablet and an extended-release tablet.

What are the various trade names under which lovastatin is available?

Lovastatin is the generic name of the drug which is available in the following trade names: 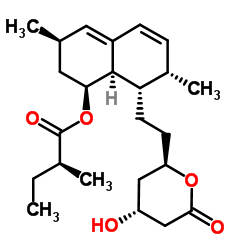 Lovastatin was the second agent of the statin class discovered. This drug was discovered by Alfred Alberts and his team at Merck in 1978 after screening only 18 compounds over 2 weeks. The agent, also known as mevinolin, was isolated from the fungi Aspergillus terreus.

Research on this compound was suddenly shut down in 1980 and the drug was not approved until 1987. Interesting, Akira Endo at Sankyo Co. (Japan) patented lovastatin isolated from Monascus ruber four months before Merck. Lovastatin was found to be 2 times more potent than its predecessor, mevastatin, the first discovered statin.

What are the functions of lovastatin?

By how much lovastatin affects cholesterol levels in the blood?

Lovastatin was the first statin to be approved of by the Food and Drug Administration (FDA). It was first derived from the fungus “Aspergillus terreus”. It appears as a white crystalline powder, is insoluble in water and sparingly soluble in ethanol and methanol.

What type of a drug is lovastatin?

Lovastatin is a prodrug. This means that it is an inactive drug when it is administered to a person. After being administered, it undergoes some metabolic and chemical changes to convert to its active form. The effects of lovastatin on cholesterol synthesis can only occur when it converts to its metabolically active form.

What are the various doses in which lovastatin is available?

Lovastatin is available in the following dosages:

What are the inactive ingredients usually present in a tablet of lovastatin?

The various ingredients present in a tablet of lovastatin include (apart from the drug itself):

What is the mechanism of action of lovastatin?

Lovastatin inhibits the function of the enzyme HMG-CoA reductase. As a result, the conversion of HMG-CoA to mevalonate does not occur. As a prodrug it is activated in vivo via hydrolysis of the lactone ring to form the β-hydroxyacid.

Such product mimics the tetrahedral intermediate produced by the reductase allowing the agent to bind to HMG-CoA reductase with 20,000 times greater affinity than its natural substrate. The bicyclic portion of lovastatin binds to the coenzyme A portion of the active site.

What are the pharmacokinetics of lovastatin?

After twenty-four hours of administration of the first dose, 10% of the peak levels were showed in the blood. In experiments conducted on testing the amount of lovastatin absorbed into the bloodstream, after administration by the oral route, it was showed that about 30% of the total oral dose was absorbed.

It has also been determined that lovastatin has an extremely high affinity for the liver, more so than the non-target organs. The liver is the site in the human body where lovastatin undergoes first-pass extraction. It also happens to be the primary site of action of the drug. As a consequence, a major portion of the degradation products of lovastatin is found in the bile.

Because the drug undergoes extensive first-pass extraction in the liver, the amount of drug available to circulate in the blood is low. In some patients undergoing treatment for hypercholesterolemia, it was observed that less than 5% of the oral dose of the drug reached the blood circulation. The area under the plasma drug concentration-time curve (AUC) for lovastatin was showed to be about 40%.

Peak plasma concentration of this metabolite is achieved two to four hours after the first administration of the drug. In certain experimental settings, it has been seen that if Lovastatin is given under fasting conditions, only two-thirds of the metabolic product formed as a result of the breakdown of lovastatin is seen in the blood.

This is in comparison to a greater amount of degradation products found in the blood if lovastatin is administered in normal conditions or with meals. In patients who are suffering from kidney disease or renal insufficiency, the plasma concentrations of the metabolic products of lovastatin were found to be significantly higher than those of people with normal kidney function, approximately up to two-fold.

The same effects are seen in elderly or geriatric patients. In that age group, the plasma level of the inhibitory products was increased by approximately 45%, as compared to patients in a younger age group.

What are the indications of using lovastatin?

How to properly use lovastatin?

What to do if a dose of lovastatin is missed?

What are the precautions while using lovastatin?

What are the contraindications to the administration of lovastatin?

Pregnancy and the use of lovastatin

Lovastatin interaction with other drugs

Lovastatin should be avoided completely if someone is taking any one of the following medications:

A physician needs to be notified before the use of lovastatin if someone is taking the following medicines:

What foods should be avoided while using lovastatin?

What are the side effects of lovastatin?

As with any drug, side effects are a common problem. A wide variety of commonly experienced side effects have been reported with the use of lovastatin. Broadly, the side effects of using lovastatin include (but are not limited to):

These have been expounded on further in the paragraphs below. 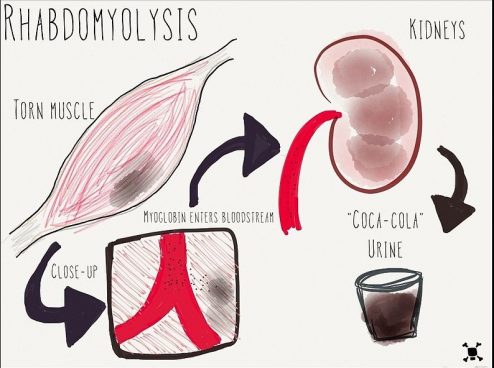 Immediate medical attention is required if any of the following signs of an allergic reaction are noticed:

In rare instances, the use of Lovastatin can result in the breakdown of skeletal muscle. The following signs and symptoms should necessitate immediate medical attention if any one of them is experienced:

Slightly deranged laboratory reports while testing the blood might be expected. The parameters likely to be impaired include:

Can I take lovastatin with amiodarone?

Concomitant use of amiodarone with higher dosages of lovastatin may be associated with an increased risk of myopathy since amiodarone can increase lovastatin levels in blood. The suggested mechanism is inhibition of lovastatin metabolism by amiodarone of intestinal and hepatic CYP450 3A4 inhibition, which can result in enhanced bioavailability as well as reduced clearance of this statin.

In general, the risk of myopathy associated with the statin use is considered to be dose-related and increased by high levels of HMG-CoA reductase inhibitory activity in plasma. Myopathy demonstrated as muscle pain with or without weakness related with grossly elevated creatine kinase exceeding 10 times the upper limit of normal has been reported occasionally. Rhabdomyolysis has also occurred rarely, which may be accompanied by acute renal failure secondary to myoglobinuria and may result in death.

Can I take lovastatin with diltiazem?

Concomitant use of diltiazem and lovasatin has been shown to significantly increase the blood concentrations of lovastatin acid, which is the active metabolite of lovastatin. The mechanism of interaction is however not fully understood but may involve diltiazem inhibition of the CYP450 3A4 isoenzyme and/or P-glycoprotein efflux transporter, of which both lovastatin and lovastatin acid are substrates.

Myopathy exhibited as muscle pain and/or weakness associated with grossly elevated creatine kinase exceeding 10 times the upper limit of normal has been reported rarely. Rhabdomyolysis has been also repoted, which may be accompanied by acute renal failure secondary to myoglobinuria and may result in death.

Can I take lovastatin with antifungal agents (fluconazole, miconazole, itraconazole)?

Concomitant use of lovastatin and annitfungals drugs such as fluconazole, miconazole, itaconazle etc that are potent inhibitors of CYP450 3A4 may significantly increase the plasma levels of lovastatin that are substrates of the isoenzyme. High levels of HMG-CoA reductase inhibitory activity in plasma is linked with an increased risk of musculoskeletal toxicity.

Myopathy manifested as muscle pain and/or weakness associated with grossly elevated creatine kinase exceeding ten times the upper limit of normal has been reported occasionally. Rhabdomyolysis has also occurred rarely, which may be accompanied by acute renal failure secondary to myoglobinuria and may result in death. Within the azole class, ketoconazole and itraconazole are considered the most potent inhibitors, while fluconazole is comparatively weak and generally causes clinically significant interactions with CYP450 3A4 substrates only at dosages of 200 mg/day or more.

Can I take lovastatin with niacin?

There are reported cases of severe myopathy and rhabdomyolysis after concomitant use of lovastatin and niacin. The exact mechanism is unknown; but, the development of myopathy has been linked with both the uses of lovastatin alone and lipid-modifying dosages of niacin with 1 g/day or more alone. Certain races may be more susceptible to the interaction.

The incidence of myopathy was found to be higher in patients of Chinese descent (0.43%) compared to patients not of Chinese descent (0.03%) taking 40 mg simvastatin and lipid-modifying dosages of a niacin-containing product. The exact cause of the increased incidence is unknown, and it is also unknown if the increased risk applies to other Asian populations or to other statins when given to Chinese patients.

Can I take lovastatin with hydralazine?

The risk of peripheral neuropathy may be increased during concurrent use lovastatin and hydralazine. A patient who are at higher risk and diabetics and patients older than 60 years. In some cases, the neuropathy may progress or become irreversible despite discontinuation of the medications.

Can I take lovastatin with warfarin?

Concomitant use of warfarin together with lovastatin may provoke the increased risk of bleeding. Patents may need a dose adjustment based on your prothrombin time or International Normalized Ratio (INR). Call your doctor promptly if you have any unusual bleeding or bruising, vomiting, blood in your urine or stools, headache, dizziness, or weakness.

It is important to tell your doctor about all other medications you use, including vitamins and herbs. Do not stop using any medications without first talking to your doctor.

Can I take lovastatin with levothyroxine?

Rarely, lovastatin has been reported to reduce the pharmacologic effects of thyroid hormone. The exact mechanism of interaction is unknown but in isolated cases, those who were stabilized on levothyroxine developed symptoms of hypothyroidism and/or elevated thyroid-stimulating hormone (TSH) levels after lovastatin use.

“What is Omega XL and Does it Work?“