Can you take Mucinex with NyQuil

Mucinex is a Brand name for a medication containing guaifenesin as an active ingredient. It is used as expectorant for relieving the symptoms of cough and mucus in the chest due to flu, colds or hay fever.

This drug reduces congestion in chest and makes coughs more productive by thinning mucus in the lungs and making it less sticky and easier to cough up.

Mucinex products may also contain other active ingredients such as: dextromethorphan, acetaminophen, diphenhydramine, phenylephrine and pseudoephedrine. 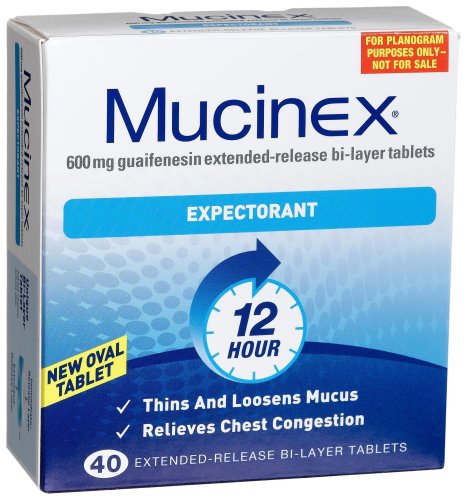 NyQuil is a brand name for OTC medication which is used for relieving symptoms of common cold. Product is a combination of 3 active substances: acetaminophen (usually in doses from 325mg to 600mg), used as a pain reliever and fever reducer, dextromethorphan (usually in doses of 15mg/pill or 30mg/30ml) used as a cough suppressant, it also has sedative properties and doxylamine succinate (usually in doses of 6.25mg/pill or 12.5mg/30ml) which is antihistamine with hypnotic effects that is used in combination with other drugs for relieving symptoms of cold and night-time allergy.

Nyquil is available in syrup and and LiquiCap dosage forms. NyQuil contains sedating antihistamines, hypnotics, or alcohol, and that’s why it should be taken before sleep. 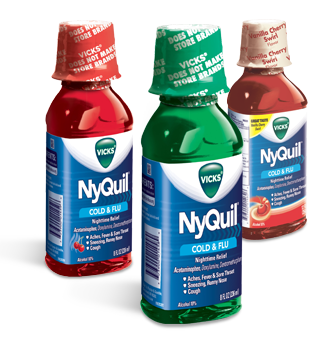 How Mucinex and NyQuil work in the body

The improved flow of less viscous secretions promotes ciliary action and can change a dry, unproductive cough to one that is more productive and less frequent. Studies have also shown that guaifenesin has muscle relaxant and anticonvulsant properties due to antagonism effects on NMDA receptors.

Dextromethorphan acts on cough center in medulla by decreasing sensitivity of cough receptors and by interrupting impulse transmission. This compound is an antagonist of NMDA receptor and a non-competitive channel blocker. It is one of the most widely used antitussives

Can patients take Mucinex and Nyquil together

Since Mucinex reduces the phlegm and makes it less sticky while NyQuil quiets cough and beacause there are no significant interactions between these two drugs, patients can take them together. Most of the NyQuil preparations do not have substance that can thin the mucus so Mucinex can accomplish this.

However, they always need to talk to their doctor or pharmacist first, because some of Mucinex and NyQuil products can contain the same active ingredients so patients may double the doses of the same drug and increase the risk of side effects to happen.

The table below shows side effects after Mucinex and NyQuil administration in recommendable doses. The incidence can be significantly increased if these drugs are overdosed or taken together.

Special precautions and warnings during Mucinex and NyQuil administration: