Penaten is a German brand name for health care products, including baby cream that is owned by Johnson & Johnson. There are also Penaten cream products for adults. Its name comes from Penates, the household deities of Ancient Rome.

It contains zinc-oxide as main ingredient. Penaten Cream has been used for many years (since 1904.) successfully for the treatment of diaper rash, scalds, sunburn, dermatitis and the relief of itching caused by eczema, and relieves rash caused by perspiration or heat. 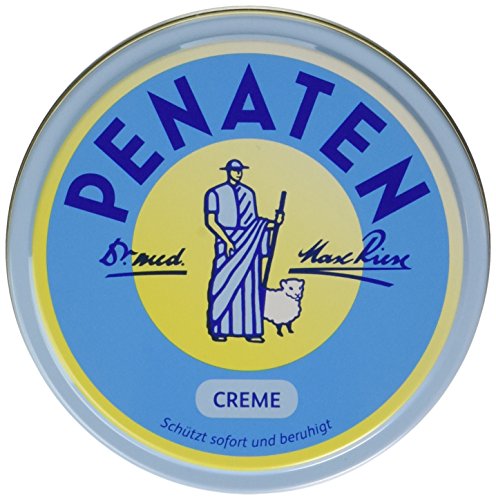 What are Penaten cream ingredients?

Can Penaten cream be used during pregnancy?

Zinc-oxide is the main ingredient of Penaten cream. Zinc-oxide topically has not been formally assigned to a pregnancy category by the FDA. Animal studies have not been reported. There are also no controlled data in human pregnancy. Zinc oxide topical is only recommended for use during pregnancy when benefit outweighs risk. It is consider safe, however pregnant women should consult their doctor before they use Penaten.

Penaten cream is commonly used for rashes. Primarily it is used for diaper rash in babies; but it has been also shown that it can be very helpful with adult skin rashes as well. Penaten cream is a barrier type of cream. It works as an extra layer of skin surface protecting your skin from the external factors that may cause a rash. Barrier creams like Penaten can also prevent the further rash as well as enable the skin’s healing process to begin.

Penaten is most commonly used for preventing and treating the diaper rash. Diaper rash may happen when the diaper rubs against the baby’s skin. The skin is rubbed and moisture comes in. The rash then begins to itch and the baby itches the exposed area making the damage worse. Penaten heals diaper rash by providing a protective barrier on top of the damaged skin.

When rash is covered with cream, the rash has the opportunity to be heal. Cream’s extra layer also prevents the diaper from irritating the baby’s skin. After cream administration, skin will be intact, will not get itchy, and the baby won’t scratch. The other parts of the body that don’t have rashes should not be covered with the cream, as the skin might get irritated later.

If Penaten cream is applying on baby, it can be noticed that the diaper rash area is more confined to a certain area of the baby’s body. You have to think ahead when applying Penaten barrier cream. The other parts of baby skin without rashes may get irritated later so cream should be applied in a wide area that not only covers the rash-prone parts of your baby body but also parts that might get a rash.

A little bit of prevention goes a long way. Penaten is also effective against diaper rash because it keeps moisture out. If you see wetness on the skin, you should clean up your baby and apply a new coat of cream.

Thet adult skin rashes can be also treated with this cream.

Can Penaten be used on face?

In general there should be no side effects if Penaten is used on face. However, there is a Penaten’s product named Penaten Baby Face and Body Cream that is used on the face.

This special combination of natural moisturizers is formulated for the sensitive skin of the face but it also works well to use anywhere else on the body. It is absorbed quickly into the skin after administration. It is dermatologically tested for skin compatibility and approved for external use.

Acne is an inflammatory condition that causes redness, breakouts, irritation and oiliness of the skin. Zinc oxide which is the main ingredient of Penaten cream can help acne symptoms by calming skin inflammation and protecting skin. Penaten will soothe redness, decrease the size of breakouts/pimples/cysts, and helps to dry out production of oil.

But it isn’t a miracle remedy for acne cure unfortunately. It works as a protector of the skin, and it won’t cure the actual condition. It is a doubt that Penaten will help to remove acne scars. Patients should talk with dermatologists for further information.

Topical preparations containing zinc oxide such as Penaten cram can be helpful for atopic eczema by minimizing itching. While Penaten will not cure the underlying cause of eczema, the aesthetic appearance may be improved after Penaten administration at least temporarily. Because this zinc-pxide is white and may help to minimize the appearance of the underlying redness. However patients should never apply it on open sores.

Combination of Miconazole and Zinc oxide topical which can be found in Penaten cream can be used to treat yeast infection such as candidiasis in children and babies who are at least 4 weeks old. Use this medicine each time you change a diaper. Before using, gently clean the diaper area and pat dry with a soft towel then apply thin layer of cream and do not rub it in on the skin.

Miconazole and zinc oxide topical will not be effective without frequent diaper changes. To best treat your child’s condition, change diapers as soon as they become wet or soiled. Keep the diaper area clean and dry.

Penaten can be helpful for dermatitis treatment, because it promotes drying of moist, oozing lesions, wet, and as well as to serve as a protective covering for inflamed skin.

Penaten is known as a soothing cure, and it can work well for fissures treatments as a form of support. After every bowel movement, patients are expected to clean and dry in around the affected area in order to avoid infection and re-infection.

Folliculitis treatment depends on the type of disorder. In the case of mild folliculitis there is a little data for the application of detergents and antiseptic chlorhexidine products. Creams based on zinc oxide such as Penaten cream and lanolin may be very useful. Soemtimes it is all that is needed. However, folliculitis caused by shaving often clears up on its own.

Genital warts formations are caused due to viruses. It is known that Zinc as a mineral in good for common cold but also seems to have an effect in combating virus. It has been showed that Zinc Oxide when it is added on top of the wart can be very helpful.

Some individuals also tell that combination of zinc-oxide cream and castor oil when it is applied for no more than 3 times a day can heal warts within a week, however patients with such issues have to see their doctor first and this is no science data. Studies have shown that topical zinc oxide, as well, was effective in treating viral warts in 80 percent of participants.

Zinc oxide creams such as Penaten may be helpful with the itching and also have drying effect on the skin however excessive use of this cream may also block the pores. Heat rash is not a serious condition, but if it is widely spread throughout the body, perspiration cooling effects may be hampered.

This can cause an increase body temperature causing a fever and heat exhaustion. Preventive treatments are needed in order to prevent more serious complications.

Is Penaten cream good for tattoos?

Generally it is good, as it relieves redness, tingling and prickling. However, there were cases when zinc-oxide from Penaten messes up tattoo by forming a white film or spots over tattoo. So it should be avoided. A&D ointments are the best option.

Jock itch or tinea cruris or ringworm, is a fungal infection of the skin that may affect the entire crotch zone. Jock itch is usually manifested as a clearly defined, itchy, reddish rash. It commonly occurs in male athletes. However, it also affects people who are diabetic, overweight or have a weakened immune system. But, young, healthy individuals and women may also be affected.

It is often related with tight clothing, heavy sweating or direct rubbing of skin against skin. Fungal infection may also affect any area of the body where skin overlaps, like under large breasts or the armpits. Jock itch is rarely serious disorder. Since it’s nothing more than a fungal infection on the outside of your body, it can be killed with the help of topical medications.

There are lots of good over-the-counter products designed specifically for jock itch, so in many cases you won’t even need to go to the doctor. Zinc oxide cream such as Penaten can be recommended as it easily relieves itching, chafing, and sweating.

Stretch marks can be prevented and reversed by administering topical zinc products such as Penaten.  Also, most expensive lotions and crams which are intended for stretch mark removal and scar reversal usually contain zinc oxide as one of their active ingredients.

Penaten cream can be used for severe itching, oozing, pain and swelling signs and symptoms that can be caused by poison ivy or oak. Preparations containing zinc oxide help to dry the skin and protect it from damage and infection.

As a natural anti-inflammatory agent, zinc can reduce inflammation. Since rosacea is an inflammatory disease, it makes sense that zinc might help reduce flare-ups.

Penaten is not a cure for psoriasis. However, it can have helpful due to its barrier effects and anti-inflammatory effects. Applying Penaten and moisturizer around the treated area can protect healthy skin.

One recent study had tested a cream that contained both copper and zinc on 21 women with photoaged skin. After 8 weeks, results were a significant improvement in elastic fiber regeneration leading to a reduced appearance of wrinkles.

Zinc oxide is known that offers high protection against damaging UVA and UVB rays, and is approved by the FDA for infants under six months.

Penaten cream should be avoided for use in dogs. If dog ingests zinc-oxide, zinc toxicity can occur. Serious problems may be caused if Penaten is ingested by dogs including kidney failure and anemia. The exact mechanism of zinc toxicosis in dogs remains unknown. The red blood cells, kidneys, liver, and pancreas are most commonly affected.

It is suggested that there oxidative damage due inhibition of red blood cellz enzymes and direct injury to the red blood cell membrane may lead to intravascular hemolysis, but that has not been proven. Excess zinc will accumulate within the kidneys, liver, and pancreas in dogs and cats. Penaten will irritate gastrointestinal mucosa, however absorption of zinc from the gastrointestinal tract is small.

As a result, dogs will vomit and self-decontaminate, thus decreasing the systemic toxicosis risk. Repeated and prolonged exposure to zinc oxide creams, when an owner applies zinc oxide topically and the animal repeatedly licks the cream the skin, may lead to systemic zinc toxicities.

If the dog is acting ill, dog should be examined to be safe. If dog ingested small amounts of the cream, it is hopefully not enough to cause some permanent or serious damage. In case dog ingest Penaten cream, milk should be given or a spoon of  hydrogen-peroxide 3% to cause vomiting in dog.

“Can I use Fluocinonide on my scalp?”
“What is the difference between Focalin Vs Adderall for studying?”