PLIVA 433 is an imprint on a pill identified as white in a round shape. Tablets are biconvex beveled and bisect on one side and plain on other side. The bisected side of tablet is debossed with ‘8’ on the upper side of bisect and ’05’ on the lower side of bisect. The pill contains trazodone hydrochloride as an active ingredient in the dose of 50 mg. Trazodone belongs to the drug class phenylpiperazine antidepressants and is used in the treatment of insomnia, anxiety, fibromyalgia, sedation and major depressive disorder.  It is supplied by Major Pharmaceuticals.

Trazodone hydrochloride is an antidepressant drug that affects chemicals in the brain that may be unbalanced in people with depression. It is atypical antidepressive drug chemically unrelated to tricyclic, tetracyclic, or other known antidepressant agents. It is used to treat the major depressive disorder.

PLIVA 433 pills are indicated for the treatment of depression. The efficacy of the drug has been showed in both outpatient and inpatient settings and for depressed patients with and without prominent anxiety. 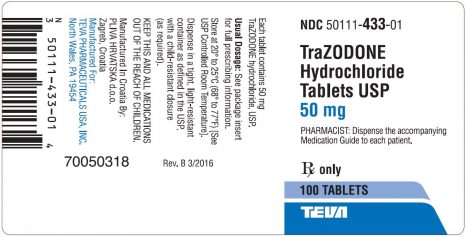 Trazodone hydrochloride is not a controlled substance. It is available via prescription.

Absorption. PLIVA 433 is well absorbed after oral administration with no selective localization in any tissue. When the medicine is taken shortly after ingestion of food, there may be an increase in the amount of drug which is absorbed, a decrease in maximum concentration and a lengthening in the time to maximum concentration. Maximum levels occur about one hour after ingestion if drug is taken on an empty stomach or two hours after dosing when taken with food.

Metabolism. In vitro studies showed that trazodone is metabolized to an active metabolite, m-chlorophenylpiperazine (mCPP) via cytochrome P450 3A4 (CYP3A4). Other metabolic pathways that may be involved in metabolism of trazodone have not been well characterized.

Elimination. In some patients, trazodone may accumulate in the plasma.

PLIVA 433 pill use during pregnancy and breastfeeding

PLIVA 433 pills may be used during pregnancy only if the benefit outweighs the risk to the fetus. Trazodone is classified in US FDA pregnancy category: C which means that if the drug is used until delivery, newborns should be monitored for the occurrence of withdrawal symptoms.

Limited data indicate that trazodone levels in milk are low and would not be expected to cause any side effects in breastfed infants, especially if the infants are older than 2 months or when doses of 100 mg or less are used at bedtime for sleep.

What are different brand names for trazodone?

Trazodone hydrochloride may cause following side effects:

How long PLIVA 433 pill stays in the system?

The elimination half-life of PLIVA 433 pills is considered to be in the range of 5 to 9 hours, although some sources estimate 7.3 hours.  According to this data, after discontinuation, it will take around 7.3 hours to eliminate 50% of the drug from the system.  To completely clear PLIVA 433 pills from the body, it’ll take about 1.67 days.

After ingestion, trazodone is broken down into different metabolites, some of which are thought to linger for a longer period than the parent compound.  Trazodone is metabolized into a primary metabolite known as “m-chlorophenylpiperazine” (mCPP) which has an elimination half-life of 2.4 to 6.8 hours.  However, there are also other metabolites of trazodone that have been reported to carry an elimination half-life of up to 13 hours.