Risedronate is a salt of a risedronic acid and belongs to the group of drugs called bisphosphonates. These drugs alter the cycle of bone formation and bone resorption in such a way that more bone is being formed that is removed.

Therefore the net effect is bone strengthening and increase in bone mass. This will reduce the incidence of pathological fractures.

Risedronate is given to individuals suffering from bone metabolism disorders such as osteoporosis, Paget’s disease of bone, etc.

It is produced and marketed by several companies such as Takeda in Japan, Warner Chilcott and Sanofi Aventis in the US and is marketed under the trade names Actonel, Atelvia and Benet.

Since calcium is an important supplement needed for bone formation, it is also available in a preparation that includes a calcium carbonate supplement. This particular preparation is marketed as ‘Actonel with Calcium’. 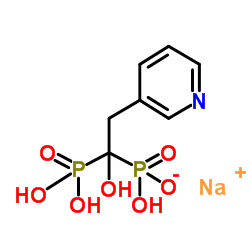 Drug class: It is an organic compound belonging to the class of bisphosphonates. These compounds contain phosphonate groups linked together through a carbon atoms.

Risedronate sodium appears as white to off-white colored, fine crystalline powder which is odorless and soluble in water and in other aqueous solutions, but insoluble in common organic solvents.

What is the mechanism of action of risedronate?

Risedronate is a bisphosphonate which are structural analogues of inorganic pyrophosphate, a substance which is present in almost all body fluids and prevents soft tissue calcification. Thus it plays a regulatory role in bone mineralization process.

Normally bone deposition and bone resorption both are taking place and both are closely regulated by the body. This process is known as remodeling. However if due to any pathological process bone resorption is increased, then risedronate is given.

This enzyme is a pivotal element of mevalonate cascade that leads to isoprenoid lipids production.

These lipids are needed for post-translational modification of small GTP-binding proteins essential to osteoclast function. Therefore inhibition of this enzyme will lead to decreased osteoclastic function.

What are the indications of risedronate?

The indications of risedronate include:

Off-label uses of risedronate include:

What are the contraindications of risedronate?

Risedronate is contraindicated in the following conditions:

Is risedronate the ‘best’ bisphosphonate?

Current clinical guidelines put both risedronate and alendronate as the treatment of choice for osteoporosis as both reduce the risk of vertebral as well as non-vertebral fractures by over 50%.

However studies comparing these two drugs have not been carried out.

Absorption: After oral intake, it is absorbed in the upper GI tract. The peak serum concentration is achieved one hour after its administration and the absorption is same for a range of doses.

There is significant effect of food on its absorption. The summary of effect of food is given below and is compared with the absorption in fasting state (no food or drink for 10 hours prior to or 4 hours after dosing):

When risedronate is administered 1 hour before breakfast, its absorption is reduced by 30%

Distribution: the volume of distribution for risedronate is 13.8 L/kg in humans. At any given time, about 24% of the drug is bound to plasma proteins.

Preclinical studies showed that about 50-60% if the drug ends up in bone and the remaining was excreted in urine.

Distribution of risedronate to soft tissues is very low and ranges from 0.001% to 0.01% and this too after multiple doses have been taken.

Metabolism: There is no evidence of systemic metabolism of the drug despite multiple scientific studies been carried out to find it.

The unabsorbed drug is eliminated unchanged in feces. The terminal exponential half-life of risedronate is 561 hours.

How long risedronate stays in your system?

It is because of this reason that some clinicians will stop risedronate after 3 to 5 years of use as you will still be able to gain the benefits of the drug long after its cessation.

All bisphosphonates are notorious for causing irritation of upper GI. This may result in the development of diseases such as esophageal ulcers, esophagitis, and esophageal erosions, which can cause bleeding and as well as esophageal strictures or perforation needing immediate hospitalization.

Similarly bisphosphonates can aggravate other medical conditions of the upper GI such as gastritis, duodenitis, ulcers or dysphagia to any cause.

Therefore patients should be advised to immediate seek medical attention if they start experiencing dysphagia, odynophagia, retrosternal pain or new or worsening heartburn.

Risedronate will take the calcium from the blood and deposit it in the bone therefore reducing the amount of calcium in the blood.

This might cause hypocalcemia. Therefore instruct the patients to take of their dietary intake of calcium and vitamin D or give supplements.

Osteonecrosis of the jaw can occur while taking most bisphosphonates including risedronate. IT can after tooth extraction or local infection with delayed healing. In some cases it can occur spontaneously.

Patients who develop osteonecrosis of the jaw need to consultant an oral surgeon right away and discontinuation of bisphosphonates can also be undertaken.

Bisphosphonates have been known to cause severe, intractable pain of the joints, bone or muscles which may even cause movement problems leading to incapacitation.

The onset of such type of pain varies from one day to several months after starting the drug.

It was seen that after stopping the drug, most patients were relieved of their pain however some did need additional pharmacological interventions. Restarting the drug or shifting to another drug of the same class might cause recurrence of these symptoms.

Fractures of femur with low energy trauma have been reported in individuals taking bisphosphonates. These fractures can occur anywhere in the femoral shaft and are short oblique or transverse without comminution.

Atypical fractures maybe unilateral or bilateral and present as dull, aching thigh pain, weeks to months before a complete fracture occurs. Undergoing steroid therapy will increase the patients risk to develop such fractures.

Ideally, any patient undergoing or having a history of undergoing bisphosphonate therapy and now experiencing pain in the thigh or groin region should be tested for femoral fracture.

If a diagnosis is made, then contralateral limb should also be checked for any symptoms and signs of fracture. Discontinuation of bisphosphonates should be considered after taking a risk/benefit assessment by the physician.

Renal impairment and risedronate use

Patients having a GFR of less than 30 ml/min should not be given bisphosphonates.

Status of sex hormones of both men and women should be checked (and appropriate replacement consider if the levels are low) before starting risedronate for the treatment and prevention of glucocorticoid-induced osteoporosis.

Bone imaging is vital in the field of radiology and maybe carried out by using specific bone imaging agents. Bisphosphonates interfere with them, although specific studies for risedronate have not been carried out.

Risedronate can cause a number of side effects. Some of these mild side effects which usually do not require immediate medical attention and usually disappear as the body gets used to the drug

The following side effects are due to a serious underlying condition. If they appear, consult your physician immediately

What if I overdose risedronate?

The following are the symptoms of overdose:

No specific guideline by a competent authority is available. However, these general steps can be taken for its management:

What should you know before taking risedronate?

What should you do if you have missed your dose?

If you’re taking risedronate 35 mg once a week and if you have missed your dose, then take one tablet immediately if you’ve not had your breakfast and have breakfast 30 minutes later.

If you have had your breakfast, then take one tablet the next morning and then return to taking one tablet once-a-week, as originally scheduled on their chosen day. Never take two 35 mg tablets on the same day.

If you are taking risedronate 150 mg once a month, then check if your next month’s scheduled dose is more than 7 days away. If yes taken one tablet immediately if you’ve not had your breakfast and have breakfast 30 minutes later.

If you have had your breakfast, then take one tablet the next morning. Never take two 150 mg tablets within 7 days of each other.

How to store and dispense the risedronate?

Risedronate is stored at 20° to 25°C (68° to 77°F). Ideally it should be dispensed in a tight, light-resistant container with a child-resistant closure. It is not an over the counter drug and pharmacist should only dispense it after seeing the prescription.

What is the dosage and administration of risedronate?

Risedronate is available as an oral formulation only. The dose of risedronate depends upon the disease being treated. The recommended doses are:

Can I take risedronate if I am pregnant?

Risedronate has been grouped as pregnancy category C drug. This means that there have been no adequate studies on the effect of risedronate on pregnancy in humans.

However, a theoretical risk to the human fetus remains because it was observed in animals that there was an increased likelihood of abortion and prematurity.

Therefore you should only start taking this drug if the benefits far outweigh the risks.

Can I take risedronate if I am breastfeeding?

There has been no study to identify the presence of risedronate in human breast milk, however, the drugs presence was identified in the milk of dogs indicating a small amount of lacteal transfer. Therefore this drug should only be taken if it is absolutely necessary for the mother.

How safe is risedronate for children with osteogenesis imperfecta?

The safety of risedronate has been studied in children. The two studies concluded that there was no decreased risk of fractures when risedronate was given to pediatric population with osteogenesis imperfecta. There was also an increased likelihood of developing the following side effects

Can I take risedronate if I have liver impairment?

Risedronate is not metabolized by the liver. So even if you have liver dysfunction, dose adjustment is not required and you can continue to use the drug as long as the underlying problem is not treated.

Can I take risedronate if I have kidney dysfunction?

However if there is sever kidney dysfunction, characterized by creatinine clearance less than 30 ml/min, then dose adjustment is necessary.

Do you need to decrease the dose of risedronate in elderly?

A significant proportion of the patients with bone metabolism are above 65 years of age. At this stage due to aging, the human physiology is altered.

Therefore a number of studies have been carried out to check for the efficacy and safety of risedronate in elder population.

In this regard a research carried out on elderly male patients of osteoporosis showed that there might be increased sensitivity of the drug in such population. Therefore there might be a need to decrease the dose of risedronate in some patients.

Does risedronate cause infertility?

Rats and dogs were exposed to doses 5 times the recommended dose for humans. It was found that at this high dose, females suffered from ovulation problems while males underwent testicular atrophy.

There is no such study on humans, however from this information it can be seen that risedronate will only cause infertility if it is taken at a very high dose for quite some time.

Can risedronate cause cancer?

High dose risedronate (more than 5 times the dose in humans) was given to mice to check for teratogenicity. The study was conducted over 104 weeks and even then there were no significant findings of drug induced tumor in mice.

Similarly, there was no evidence of chromosomal damage in mice exposed to such high dose of risedronate.

What are some drugs that can interact with risedronate?

The following drugs interact with risedronate

Can I take risedronate with Aspirin?

In theory, there is a concern and increased risk and severity of GI toxicity during concomitant use of oral bisphosphonates and NSAIDs due to additive or synergistic effects on the GI mucosa.

Because NSAIDs lower the rate of stomach and duodenum ulcer healing, it is also possible that NSAIDs may postpone healing and promote mucosal injury caused by oral bisphosphonates.