Rosemary or Rosmarinus officinalis L. is an aromatic plant belonging to the Lamiaceae family. It is widely consumed as a food ingredient, particularly as a culinary spice.

This plant, commonly used in the so-called Mediterranean diet, is able to significantly contribute to the organoleptic characteristics of the food in which is included.

However, rosemary has also been traditionally used in folk medicine to treat several health disorders; this has finally triggered a great deal of research that has focused on this plant and its main chemical components which could be responsible for the beneficial health properties attributed to this species.

The main bioactivities related to rosemary are anti-inflammatory, chemopreventive, anti-proliferative, antimicrobial, protective towards neurological disorders as well as decreasing the risks related to obesity, diabetes and metabolic syndrome, among others.

Origin: Native to the Mediterranean region, rosemary is widely cultivated for its culinary use. It is known as the ‘herb of remembrance’ and is mentioned in Anglo-Saxon herbals of the 11th century.

The main compounds responsible for bioactivities are the polyphenols present on this plant. Among them, two main groups of components with varying polarities may be found, namely, phenolic acids and phenolic diterpenes.

In the first group, rosmarinic acid is highlighted as one of the most abundant, whereas in the second group, carnosic acid and carnosol are pointed out.

In any case, the chemical pattern in rosemary is complex, and other minor components including rosmanol, epiisorosmanol, epirosmanol, rosmadial, carnosol quinone, methyl carnosate as well as some flavonoids could have a significant influence on some of the activities related to rosemary extracts and fractions.

Moreover, other components present on the essential oil, including 1-8-cineol, camphor, a-pinene or borneol have also been related to some bioactivities, mostly antioxidant and antimicrobial activities

Different researches have covered the study of the antiinflammatory activity of rosemary extracts and components, confirming previous observations regarding the activity presented by rosemary leaves.

Carnosic acid and carnsosl are the most examined components of rosemary. It has been observed that the activity of these phenolic diterpenes may be on the level of gene regulation, asthey were demonstrated to activate the peroxisome proliferatoractivated receptor gamma (PPARg).

Moreover, these components suppressed the formation of pro-inflammatory leukotrienes in intact human polymorphonuclear leukocytes and inhibited the activity of 5-lipoxygenase.

Other already described mechanisms of action for carnesol rely on the reduction of lipopolysaccharide stimulated NO production in cells treated with this substance.

Rosmarinic acid administered at 25 mg kg1 efficiently reduced paw oedema at 6 hours by over 60% exhibiting a dose-response effect, whereas the same amount was also able to reduce multi-organ dysfunction markers by modulating NF-kB (nuclear factor kB) and metalloproteinase-9 in the thermal injury model.

It has also even been observed how rosemary extracts enriched in carnsoic acid and carnosil may be more active than the equivalent amount of those compounds tested separately, suggesting a synergistic or additive effect with other components present in the extracts in lesser extent.

The anticancer effects of rosemary extract and its major phenols have been widely studied in the last years.

Anticancer activity of rosemary extracts can be classified according to its ability to protect against the main three stages of cancer development: initiation (chemopreventive activity), promotion (anti-proliferative activity) and progression (antiinvasive or anti-metastatic activity).

The chemopreventive activity of rosemary extracts has been related to its antioxidant properties, in particular with its capacity to scavenge free radicals, which can protect against ROSinduced oxidative damage to lipid, proteins, and DNA.

Besides to the protective effects derived from the response to oxidative stress, there are also several studies suggesting that carnosic acid and carnosol may exert an anti-proliferative activity.

Carnosic acid possessed anti-proliferative activity mainly caused by its capacity to destabilize the mitochondrial membrane which leads the subsequent release of pro apoptotic proteins into the cytoplasm.

Once into the cytoplasm, those proteins are able to activate other proteins, such as caspase-3, which can promote programmed cell death.

Furthermore, carnosic acid reduced the phosphorylation of Akt, which was partially inhibited by insulin, an activator of phosphatidylinositol 3-kinase (PI3K)/Akt signaling pathway.

One small RCT study has investigated the effects of rosemary leaf powder in different doses for cognitive function. Results showed a biphasic dose-dependent effect of rosemary in a speed of memory.

The lowest dose of 750 mg had a significant effect compared to placebo, whereas the highest dose of 6000 mg had an important impairing effect.

Several doses of rosemary revealed deleterious effects on measures of cognitive performance, but these effects were inconsistent and not dose-dependent. Further researches are required to confirm these findings.

There was no evidence for the involvement of nicotinic receptors, prostaglandins or nitric oxide with this activity.

Several published reports have linked rosemary with different positive effects on parameters related to metabolic syndrome. Those studies are based on both in-vitro and in-vivo investigations.

A variety of mechanisms are involved, although there is still no complete clarification of how rosemary may exert the observed effects, as there are even contradictory findings.

In general, it has been demonstrated that different rosemary extracts may decrease body weight as well as cholesterol and triacylglyceride levels as well as increase fecal lipid excretion when administered to different rat models during several weeks.

Results comparison is difficult caused by extensive genetic differences among animal models including obese, diabetic and hypercholesterolemic animals, as well as among the extracts tested and amount administered.

When an extract containing 40% carnosic acid was fed (0.5% of diet) to lean and obese rats, it was possible to observe differences on the regulation of key metabolic sensors, suggesting that obese animals were more resistant to the rosemary extract, although a body weight loss was also observed in this case.

Anyhow, carnosic acid was always pointed out as the main component present on the studied extracts.

Moreover, rosemary also decreased the levels of advanced glycation end products as well as lipid accumulation in hepatocytes. On the other hand, fecal lipid excretion was enhanced and the liver GSH/GSSG ratio was increased.

Rosemary is commonly used in the treatment of diabetes and hypertension. Several studies have shown that orally administered rosemary extracts lower blood glucose in both healthy and diabetic animals.

This is in contrast to an earlier study, where intramuscular administration of rosemary oil resulted in a hyperglycaemic effect in glucoseloaded rats and rabbits with alloxan-induced diabetes.

Chronic treatment with 10 mg/kg hydroalcoholic extract of rosemary has been shown to produce antidepressant effects in rodents, similar to those produced by fluoxetine (Prozac).

The rosemary extract, like fluoxetine, was found to reduce the activity of acetylcholinesterase (AchE), thereby increasing the levels of the neurotransmitter acetylcholine.

Allergic reactions including erythema and dermatitis, confirmed by patch test, have been reported after ingestion of rosemary or topical application of products containing rosemary.

Photosensitivity has been associated with rosemary oil. Carnosol was identified as the major allergen in a case of occupational contact dermatitis

Ingestion of a phenolic-rich extract of rosemary was found to significantly reduce absorption of non-haem iron in healthy women.

While no other interactions have been reported in humans, rosemary has been shown to induce the drug-metabolising isoenzymes CYP1A1, CYP1A2 and CYP2B1/2 in rats.

Rosemary may have a weak potential to interact with antidiabetics, as it has been shown to reduce serum glucose levels in animals.

Inhibition of platelet aggregation has also been observed in animal and in vitro studies, so caution should be observed in patients on antiplatelet therapy.

Hypersensitivity to rosemary. Safety of rosemary during pregnancy is uncertain. Older reports describe the use of rosemary (possibly the oil) as an abortifacient, although animal studies have not indicated such activity for aqueous extracts.

Rosemary is also reported to be an emmenagogue (affects the menstrual cycle), thus during pregnancy and lactation amounts higher than those found in normal food intake should be avoided.

Epileptics should avoid high doses of rosemary due to the potential of the constituent camphor to cause convulsions.

For products intended for internal use, follow manufacturers’ instructions.

Dried herb, for oral administration (adults): 2–4 g as an infusion three times daily; 4–6 g daily; for external use: 50 g for one bath.

Essential oil: for external use only, diluted to 2.5% with inert carrier oil.

Some popular Rosemary products are following: 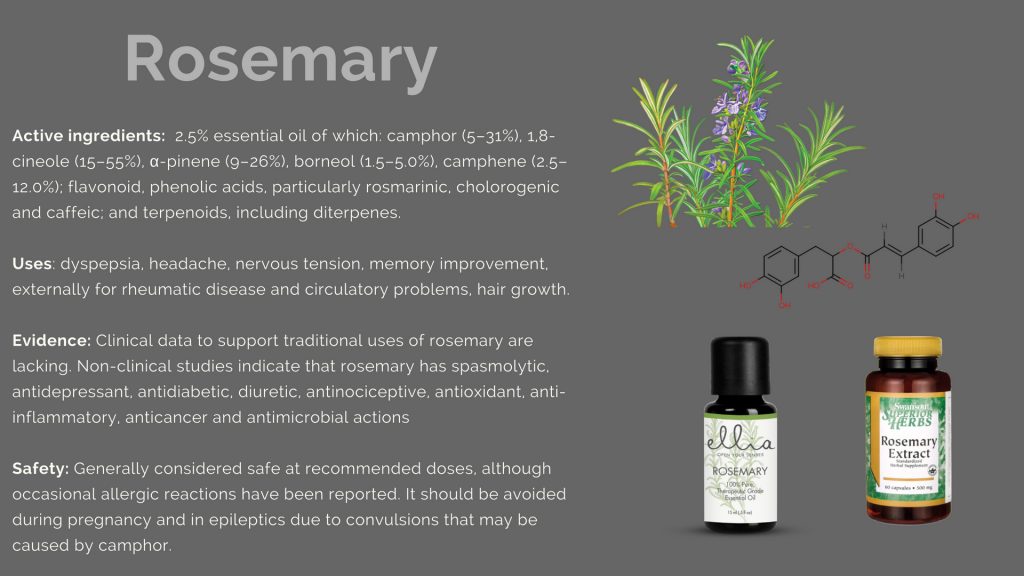 “What are the benefits of maca essential oil?“