Capsules or pills imprinted with S489 contain the drug lisdexamfetamine, also known by its brand names: Vyvanse, Aduvanz, Tyvense, and Elvanse. The name lisdexamfetamine is derived from the full chemical name of the compound L-lysine-dextroamphetamine, which consists of an amino acid and phenethylamine.

This medication is classified under Schedule II controlled substances, which includes drugs such as: cocaine, methamphetamine, oxycodone, and fentanyl. S489 is only available with a prescription from a licensed physician. The capsules are available in different dosages which also have corresponding colors to prevent incorrect administration and mix-ups. 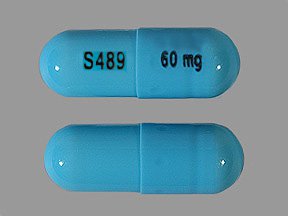 What Does Lisdexamfetamine Do?

Lisdexamfetamine, S489, or Vyvanse, is a stimulant of the central nervous system (CNS) and is used primarily to treat several mental disorders in adolescents and adults, namely: attention deficit hyperactivity disorder (ADHD) and eating disorders.

As an amphetamine, lisdexamfetamine’s mechanism of action involves increasing the release and blocking the metabolism of catecholamines such as epinephrine, norepinephrine, serotonin, and dopamine.

These catecholamines work as neurotransmitters which are important in controlling our mood, emotions, memories, concentration, and alertness. In patients with ADHD and other similar disorders, there is an imbalance of neurotransmitters, particularly low levels of dopamine.

How Does it Work?

The process of how lisdexamfetamine acts within the body is essentially the same as other amphetamines. As mentioned previously, lisdexamfetamine is a prodrug, so it requires enzymatic breakdown after being orally ingested. The enzyme responsible for this conversion of prodrug to its active form is found within red blood cells, and it works by cleaving or separating the amino acid L-lysine from the active compound dextroamphetamine.

The target cells and receptors are located within the brain, particularly affecting the sympathetic nervous system, cerebrospinal axis, cortex, brainstem, and medulla.

Once the amphetamine binds to its receptor on the presynaptic neuron, it will trigger the release of the stored neurotransmitters, which will help to improve the attention and mood of the patient by correcting the deficit of neurotransmitters which can enter the synaptic cleft and later bind to receptors on the post-synaptic neuron.

How Do I Take Lisdexamfetamine?

Lisdexamfetamine is available in various dosage forms, particularly chewable tablets and hard capsules. The typical dosing regimen of lisdexamfetamine is once daily, with a starting dose of 30 mg which is later increased to 50 to 70 mg. Before taking your medication, be sure to double-check your prescription bottle and drug labels.

Ensure that your medication name, dose, and dosage form are all correct, as well as the expiration date. Do not take the medication if any of the above are different or if the medication is already expired. Expired medications may have become totally inactive or possibly may cause toxicities if ingested.

Take the medication properly; hard capsules should be swallowed whole, while chewable tablets should be chewed thoroughly before swallowing. Although both medications have the same active ingredients, their effects are elicited differently.

As with all prescription medications, do not share or give any of your capsules or tablets to anybody else. This medication can only be prescribed after consultation with a licensed physician. This medication is only intended to treat patients ages 6 and above. Sharing of medications may not only be a risk to other people, but also a risk to yourself because the amount dispensed to you will be enough for your scheduled treatment.

Never double the dose if you missed one because this may lead to severe toxicity and worsen your condition. If you experience any adverse reactions or develop allergies to the medication, contact your physician right away.

What are the Side Effects & Contraindications?

Like all other drugs and medications, lisdexamfetamine is not without its own set of adverse effects, drug interactions, and contraindications. As part of the amphetamine family of chemical compounds, lisdexamfetamine may cause addiction and dependence.

Similar to other stimulants, this drug can increase your risk of heart failure, myocardial infarction, stroke, and even sudden death, especially in those with comorbidities such as hypertension, pre-existing heart disease, or a congenital heart defect.

Because lisdexamfetamine acts on the CNS, taking other drugs that also act on the brain for treating psychoses such as depression, bipolar disorder, etc. may worsen your condition. Most notably, drugs from the class of monoamine oxidase inhibitors (MAOIs) are contraindicated for patients taking lisdexamfetamine or its derivatives.

Some members of the MAOIs are: isocarboxazid (Marplan), linezolid (Zyvox), phenelzine (Nardil), selegiline (Emsam), moclobemide (Manerix). The effect of taking an MAOI with a CNS stimulant such as amphetamines is dangerous because MAOIs prevent or slow the breakdown of the active compound in amphetamines, which then causes increased or prolonged effect in the body.

That is why if you are taking any of the aforementioned drugs or other MAOIs, you must wait for at least 14 days until you can start taking lisdexamfetamine or other amphetamines in order to clear the body of MAOIs and prevent adverse reactions.

There have not been a sufficient number of studies conducted testing the teratogenicity of lisdexamfetamine, however it has been established that the drug can pass into a breastfeeding mother’s milk, which can then affect the infant. If taken during pregnancy, lisdexamfetamine may cause complications such as premature birth, low weight, and even withdrawal symptoms in newborns.