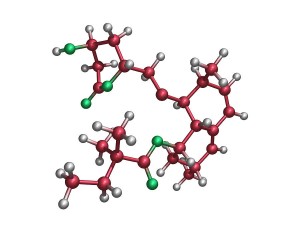 Simvastatin is a lipid-lowering substance which is synthetically derived after fermentation of the fungus specie Aspergillus terreus. It is a potent competitive inhibitor of HMG-CoA reducatase (3-hydroxy-3-methylglutaryl coenzyme A reductase ), the essential enzyme in the biosynthesis of cholesterol.

This drug can also interfere with the production of steroid hormones. Simvastatin increases breakdown of LDL cholesterol due to the induction of hepatic LDL receptors.

Generic and brand name of Simvastatin 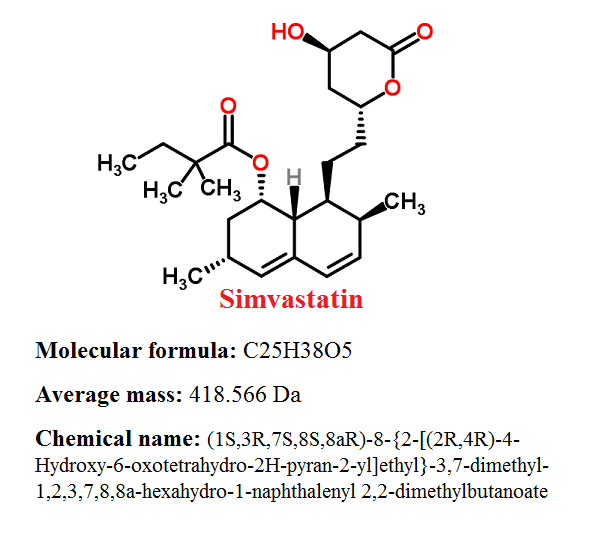 Simvastatin is a semi-synthetic drug made from the fungus Aspergillus terreus.

Why is Simvastatin prescribed 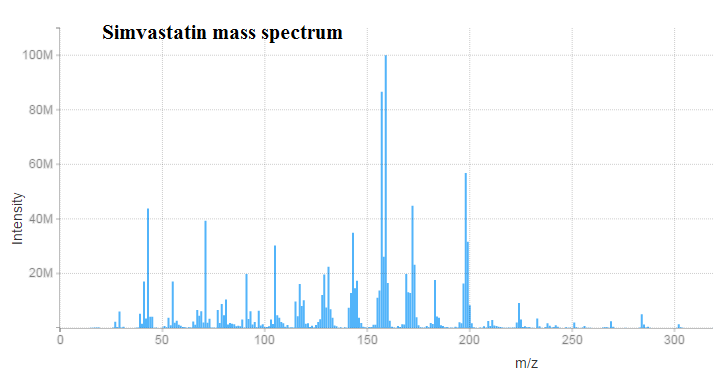 How the Simvastatin medicine works (mode of action)

Simvastatin is structurally similar to the HMG-CoA which is a substituent of the endogenous substrate of enzyme HMG-CoA reductase.

Simvastatin is a prodrug molecule in which the 6-membered lactone ring is hydrolyzed in vivo (in the body) to produce the active metabolite beta,delta-dihydroxy acid, which is structurally similar to HMG-CoA (hydroxymethylglutaryl CoA).

Once hydrolyzed, simvastatin competes with HMG-CoA for hepatic microsomal enzyme HMG-CoA reductase. Interference with this enzyme activity reduces the amount of mevalonic acid, one of the main precursors of cholesterol synthesis.

Lipid-lowering effects of simvastatin are produced in two ways: 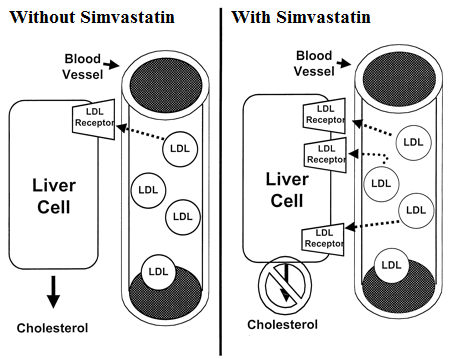 How to use simvastatin

What are the recommended doses of Simvastatin

Usual Adult Dose of Simvastatin for Prevention of Cardiovascular Disease

Less than 10 years: Not recommended 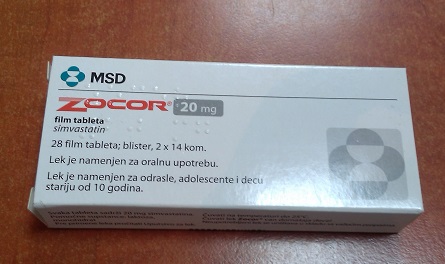 What are the pharmacokinetic properties of the drug?

Distribution:    Both simvastatin and its β-hydroxyacid metabolite are highly bound for approximately 95% to human plasma proteins. Simvastatin can cross the blood-brain barrier.

Metabolism: Simvastatin is a substrate for enzyme CYP3A4. The major active metabolites of simvastatin are β-hydroxyacid metabolite and its 6′-hydroxymethyl, 6′-hydroxy and 6′-exomethylene derivatives.

Excretion: Following an oral dose of 14C-labeled simvastatin in man, 13% of the dose was excreted in urine and 60% in feces. Half-life of the drug is about 3 hours, respectively.

What special precautions should I follow/ What should I avoid while using Simvastatin?

Which pregnancy category (A; B; C; D; X) has been assigned to Simvastatin?

Simvastatin has been given pregnancy category X by the FDA. This means that this drug is contraindicated in pregnancy – “Studies in animals or humans have demonstrated fetal abnormalities and/or there is positive evidence of human fetal risk based on adverse reaction data from investigational or marketing experience, and the risks involved in use of the drug in pregnant women clearly outweigh potential benefits.”

Simvastatin is contraindicated in pregnant women and also in woman who may become pregnant. Lipid lowering effects of statin offer no benefit during pregnancy, because cholesterol and its derivatives are very important and needed for normal fetal development.

There are rare reports of congenital anomalies in infants who were exposed to statins in utero. Simvastatin’s animal studies in rats and rabbits showed no evidence of teratogenicity.

However, It is known that cholesterol and triglycerides become increases during pregnancy, and cholesterol and its derivatives are very essential for development of fetus.

If simvastatin is used during pregnancy or if the patient becomes pregnant while taking this drug, the patient should be explained of the potential high risk to the fetus.

If pregnancy occurs, simvastatin should be immediately discontinued.

What should I know about storage and disposal of this medication?

This medication should be kept in the container it came in, out of reach of children and tightly closed. It should be stored at room temperature and away from extra heat and moisture (not in the bathroom).

Outdated medications should be thrown away any medication. Patients should talk with their pharmacist about the proper disposal of this medication.

What should I do if I forget a dose?

The missed dose should be taken as soon as patients remember it. However, if it is almost time for the next dose, patients should skip the missed dose and continue the regular dosing schedule. They should never take a double dose to make up for a missed one.

In case of overdose, patients should call their local poison control center at 1-800-222-1222. If the victim has collapsed or is not breathing, call local emergency services at 911.

The table below shows the incidence of side effects after simvastatin administration in recommendable doses. The incidence can be increased if this drug is overdosed.

Rhabdomyolysis is a serious condition in which damaged skeletal striated muscle cells breaks down very fast. Breakdown products of damaged muscle cells are released into the bloodstream.

Some of these products, such as the protein myoglobin, can be very harmful to the kidneys and may lead to kidney failure, disseminated intravascular coagulation and death.

How do you know if you have rhabdomyolysis from statin use, and how likely is it?

Although mild muscle pain is a relatively common side effect of statins, some people who take these medications to lower their cholesterol may have severe muscle pain. This intense pain may be a symptom of a serious condition called rhabdomyolysis.

The most usual signs and symptoms of rhabdomyolysis are:

If the dose of statin is higher, the higher is the risk of rhabdomyolysis. The risk increases if certain drugs such as cyclosporine (Sandimmune) and gemfibrozil (Lopid) are taken together with statins.

However, the risk of rhabdomyolysis from statin therapy is very low. Expectance is about 1.5 for each 100,000 people on statins therapy.

This condition and also other muscles inflammation which are caused by statin can be diagnosed with a blood test measuring levels of the enzyme creatinine kinase.

Patients should contact their doctor if they notice moderate or severe muscle pain after starting statins therapy.

If you experience any of these symptoms, call your health care provider immediately.

Some side effects can be serious. The following symptoms are uncommon, but if patients experience any of them, they should doctor immediately:

Does Simvastatin have any interaction with other drugs?

Cyclosporine: The risk of myopathy and rhabdomyolysis is increased if simvastatin is taken together with cyclosporine.

Clarithromycin: The risk of myopathy and rhabdomyolysis is increased if simvastatin is taken together with clarithromycin.

Colchicine: The risk of myopathy and rhabdomyolysis is increased if simvastatin is taken together with colchicine.

Gemfibrozil: Due to an increased risk of myopathy and rhabdomyolysis when inhibitors of HMG-CoA reductase are used together with gemfibrozil, combination of simvastatin and gemfibrozil should be avoided.

Other Fibrates: Due to an increased risk of myopathy and rhabdomyolysis when inhibitors of HMG-CoA reductase are used together with other fibrates, combination of simvastatin and other fibrates should be used with caution.

Niacin: The risk of skeletal muscle side effects may be amplified when simvastatin is used together with niacin. Reduction in simvastatin sodium dosage should be considered in this situation.

Does Simvastatin have any interaction with Diseases?

Liver Disease and Alcoholism: The administration of HMG-CoA reductase inhibitors is contraindicated in patients who have active liver disease or constant elevations of serum transaminases.

Statins have extensively metabolism in the liver. Reduced drug metabolism may lead to statins accumulation and increased risk of toxicity and side effects including abnormalities of the liver function and in some cases serious condition such as: hepatitis, jaundice, cirrhosis, fatty liver, and fulminant hepatic necrosis.

Therapy with statins should be administered cautiously in patients who have a history of liver disease or heavy alcohol use. Lower initial doses may be suitable, and it is recommended clinical monitoring of liver transaminase levels in blood.

If patients develop elevated ALT or AST levels during therapy, they should be monitored until abnormalities resolve. If ALT and/or AST are increased above 3 times than normal, consideration should be given to a dosage reduction or discontinuation of therapy.

Rhabdomyolysis, Myopathy, Myoneural Disorder: Severe myopathy, including rhabdomyolysis combined with acute renal failure secondary to myoglobinuria, can be caused rarely after the administration of statins.

The myopathy is suspected to be dose-related and it is characterized by muscle pain and/or weakness in combination with creatine phosphokinase increased values in blood exceeding the levels of 10 times higher than normal.

Therapy with statins should be used cautiously especially in patients with preexisting myoneural disorder or myopathy, since it may delay the recognition or confound the diagnosis of a drug-induced musculoskeletal effect.

Patients should report immediately any unusual muscle pain, weakness or tenderness, especially if it is accompanied by malaise or fever.

Renal Dysfunction: Simvastatin is partially eliminated by the kidney. In patients with significant renal impairment drug or metabolite accumulation may occur, which may increase the risk of toxicity, including hepatic and musculoskeletal side effects.

In patients with severely impaired renal function therapy with simvastatin should be administered cautiously. A lower initial dosage may be appropriate, accompanied by clinical monitoring.

“How to use hydrocodone“