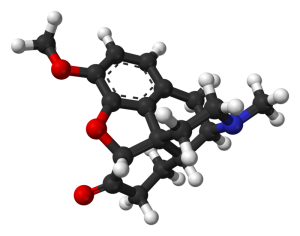 Hydrocodone is an opioid substance which is synthesized from codeine, an opioid alkaloid that can be found in the opium poppy. This drug is narcotic analgesic which is used orally for relieving the moderate to severe pain, but it is also commonly used in liquid form as an antitussive agent. 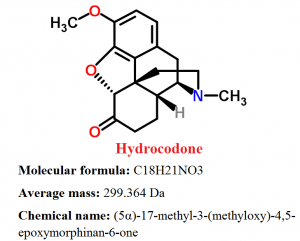 Hydrocodone is a semi-synthetic opioid drug that is synthesized from opioid alkaloid codeine.

Why is Hydrocodone prescribed

Pharmacophore structure: Information about the chemical structure of Hydrocodone

Hydrocodone belongs to the class of organic compounds known as morphinans, which are polycyclic molecules with a four-ring skeleton that has 3 condensed six-member rings which are forming a partially hydrogenated phenanthrene structure, one of which is aromatic while the other two others are alicyclic. 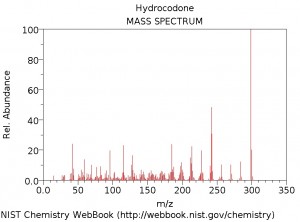 What are the different dosage forms and strengths of hydrocodone?

Hydrocodone is a weak agonist of OP1, OP2, and OP3 opiate receptors in the CNS – central nervous system. Hydrocodone predominantly affects OP3 receptors, which are coupled with G-protein receptors and functioning as modulators, both negative and positive of synaptic transmission through G-proteins which activate effector proteins.

Binding of the opiate stimulates the exchange of GTP with GDP protein on the complex of G-protein. Hydrocodone decreases intracellular levels of cAMP by inhibiting the enzyme called adenylate cyclase.

Successively, the release of nociceptive neurotransmitters such as GABA, substance P, dopamine, acetylcholine, and noradrenaline is inhibited. This drug can also inhibit the release of somatostatin, vasopressin, insulin, and glucagon.

Opiate agonists don’t change the threshold or responsiveness of afferent nerve endings to noxious stimuli nor the conduction of impulses along peripheral nerves. Instead, they alter the perception of pain at the spinal cord and higher concentrations in the CNS and the person’s emotional response to pain. 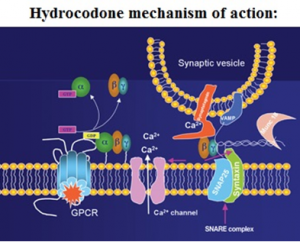 How to take hydrocodone

Initial doses for patients who are not opioid tolerant:

Food has no significant effect on the level of absorption of hydrocodone. Studies showed that peak plasma concentration of hydrocodone was increased by 27% when a Zohydro 20mg capsules was administered with a high-fat meal.

Excretion: Hydrocodone and its metabolites are eliminated predominantly in the kidneys. Hydrocodone half-life is around 1.25 to 3 hours.

What special precautions should I follow or What should I avoid while using Hydrocodone?

Which pregnancy category (A; B; C; D; X) has been assigned to Hydrocodone?

Hydrocodone has been given pregnancy category C by the FDA. This means that risk is not ruled out – “Animal reproduction studies have shown an adverse effect on the fetus and there are no adequate and well-controlled studies in humans, but potential benefits may warrant use of the drug in pregnant women despite potential risks.”

If patients are taking hydrocodone frequently during pregnancy, their baby may experience life-threatening withdrawal symptoms after birth.

Mother who used hydrocodone during pregnancy should call their doctors if their baby experiences any of these symptoms: abnormal sleep, uncontrollable shaking of a part of the body irritability, hyperactivity, high-pitched cry, diarrhea vomiting, or loss of apetite.

Hydrocodone is present in human milk. Studies showed variable concentrations of hydrocodone and its metabolite hydromorphone in breast milk of nursing mothers in the early post-partum period.

Because of the potential for causing serious side effects, including sedation and respiratory depression in a breastfed infant, breastfeeding women should be advised that hydrocodone usage is not recommended during breastfeeding.

How to dispose of hydrocodone

What should I know about storage and disposal of this medication?

This medication should be kept in the container it came in, out of reach of children and tightly closed. It should be stored at room temperature and away from extra heat and moisture (not in the bathroom). Outdated medications should be thrown away. Patients should talk with their pharmacist about the proper disposal of this medication.

Unless doctor tells otherwise, patients should continue their normal diet.

What should I do if I forget a dose?

The missed dose should be taken as soon as patients remember it. However, if it is almost time for the next dose, patients should skip the missed dose and continue the regular dosing schedule.

They should never take a double dose to make up for a missed one. Patients should not take more than one dose of hydrocodone extended-release capsules in 12 hours or extended-release tablets in 24 hours.

The table below shows the incidence of side effects after hydrocodone administration in recommendable doses. The incidence can be increased if this drug is overdosed.

Depending on the patient’s clinical status, therapy of respiratory depression includes close observation, supportive measures, and the use of opioid antagonists.

Carbon dioxide retention from opioid-induced respiratory depression can exacerbate the sedating effects of opioids. The risk is greatest during the beginning of therapy or when dose is increased.

Inhibitors of CYP3A4 and 2D6: Because the isoenzyme CYP3A4 plays a main role in the hydrocodone metabolism, drugs that inhibit activity of CYP3A4 may cause decreased hydrocodone clearance which could lead to increase in hydrocodone plasma concentrations and result in prolonged and increased opioid effects.

These effects could be more pronounced with concomitant use of CYP2D6 and 3A4 inhibitors. If co-administration with hydrocodone is necessary, patients should be monitor for respiratory depression and sedation at frequent intervals and consider dose adjustments until stable drug effects are achieved.

Inducers of CYP3A4: Cytochrome P450 3A4 inducers may induce hydrocodone metabolism and, thus, may cause increased clearance which could lead to a decrease in plasma concentrations of hydrocodone, lack of efficacy or development of a withdrawal syndrome in a patient who had developed physical dependence to hydrocodone.

After stopping the treatment of a CYP3A4 inducer, as the effects of the inducer decline, the hydrocodone plasma concentration may increase which could increase or prolong both the therapeutic and adverse effects, and may cause serious respiratory depression.

Mixed Agonist/Antagonist Opioid Analgesics: If mixed agonist/antagonist such as pentazocine, nalbuphine or butorphanol and partial agonist such as buprenorphine are used together with hydrocodone, they may reduce the analgesic effect of hydrocodone or precipitate withdrawal symptoms.

Hydrocodone is not recommended for administration in patients who have used MAO inhibitors within last 14 days as severe and unpredictable potentiation by MAOI has been reported in combination with opioid analgesics.

However, no specific interaction between hydrocodone and MAO inhibitors has been observed, but caution is needed.

Anticholinergics: Anticholinergics or other drugs with anticholinergic activity when used together with opioid analgesics may increase the risk of severe constipation or urinary retention, which may lead to paralytic ileus.

Patients should be monitored for signs of urinary retention and constipation in addition to respiratory and CNS depression when hydrocodone is used together with anticholinergic drugs.

Does Hydrocodone have any interaction with Diseases

Elderly, Cachectic, and Debilitated Patients: Respiratory depression is more likely to occur in elderly, cachectic, or debilitated patients as they may have altered pharmacokinetics or altered clearance compared to younger, healthier patients.

Such patients have to be monitored closely, particularly when initiating and titrating the dose of hydrocodone, and also when hydrocodone is given together with other drugs that depress respiration.

Chronic Pulmonary Disease: Patients with significant chronic obstructive pulmonary disease or cor pulmonale, and patients having a substantially decreased respiratory reserve, hypoxia, hypercapnia, or preexisting respiratory depression should be monitored for respiratory depression in particularly when initiating therapy and titrating the hydrocodone dose.

Hypotension: Hydrocodone may cause severe hypotension including orthostatic hypotension and syncope in ambulatory patients. There is an added risk to individuals whose ability to maintain blood pressure has been compromised by a depleted blood volume, or after concurrent administration with drugs such as phenothiazines or other agents which compromise vasomotor tone.

Head Injury and Increased Intracranial Pressure: Patients taking hydrocodone, who may be susceptible to the intracranial effects of CO2 retention such as those with evidence of increased intracranial pressure or brain tumors, should be monitored for signs of sedation and respiratory depression. Opioids may also obscure the clinical course in a patient with a head injury.

Hydrocodone should be avoided in patients with impaired consciousness or coma.

Decreased bowel motility in post-operative patients receiving opioids should be monitored. The administration of hydrocodone may obscure the diagnosis or clinical course in patients with acute abdominal conditions. Hydrocodone may cause spasm of the sphincter of Oddi. Patients with biliary tract disease, including acute pancreatitis should be also monitored.

Convulsions or Seizure Disorders: The hydrocodone may exacerbate convulsions in patients with convulsive disorders, and may induce or exacerbate seizures in some clinical settings.