Skelaxin is a Brand name for muscle relaxant medicine that contains metaxalone as an active ingredient.  This medicine works by blocking transmission of nerve impulses in the brain thus relieving pain sensations.

It is used together with rest and physical therapy in order to treat skeletal muscle conditions caused by strains, sprains or injury.  The exact mechanism of action of metaxalone is unknown, but it may be due to general central nervous system depression. Skelaxin is considered as moderately strong muscle relaxant, with generally low incidence of causing side effects. Skelaxin comes is available in the form of tablet of 800 mg.

It was also available in the dose of 400 mg but it was discontinued because of low efficacy rate. FDA approved metaxalone in 2008 for the treatment of peripheral musculoskeletal painful conditions and spasticity from upper motor neuron syndromes.  The Skelaxin is originally manufactured by Pfizer.

Why is Flexeril prescribed

Flexeril is a Brand name for a medicine containing cyclobenzaprine as an active ingredient used as a muscle relaxant. This drug works by blocking transmission of nerve impulses that causes pain sensations that are sent to the Central nervous system. Chemically cyclobenzaprine is classified to the group of antidepressants that are known as tricyclic antidepressants.

Flexeril is commonly used together with physical therapy in order to treat skeletal muscle conditions such as injury or pain. It’s also available under the brand names FusePaq Tabradol and Fexmid.

Flexeril is also prescribed off-label for fibromyalgia treatment. As a prescription medicine it is available only in the form of tablet in dose of 10 mg.  Cyclobenzaprine was approved by the FDA in 1977 under the brand name Flexeril. It is currently manufactured by PD-RX Pharmaceuticals.

Difference between Skelaxin and Flexeril

Flexeril and Skelaxin are both used as muscle relaxants and approved for short-term treatment of different painful musculoskeletal conditions. They are approved only for acute pain during 1-3 weeks period.  Cyclobenzaprine has also been studied in the treatment of fibromyalgia and migraine. There are no documented studies that show superior efficacy of one skeletal muscle relaxant over another. 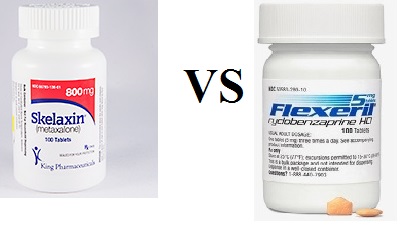 Cyclobenzaprine works by binding to serotonin receptors and it is considered as a 5-HT2 receptor antagonist that reduces tone of muscles by decreasing the activity of descending serotonergic neurons.

It primarily works by blocking transmission of pain sensation to brain.  Metaxalone’s exact mechanism has not been established yet. It has has no direct actions on the striated muscles, the motor end plate, or the nerve fiber. Its mode of action may be due to general CNS depression.

Flexeril is well absorbed after oral administration, but there are no adequate studies for metaxalone to prove the same. Flexeril has extensive metabolism, both gastrointestinal and hepatic and it is excreted primarily as glucuronides compounds via the kidney.

Metaxalone metabolism is probably hepatic.  It is excreted in the urine as unidentified metabolites. Flexeril has a longer elimination half-life time of 18 hours (range 8-37 hours) compared to Skelaxin, which half-life is about 9.2 hours.

Studies showed that Skelaxin has the lesst reported side effects among all skeletal muscle relaxants and appears to be the safest one. Metaxalone is considered to be less sedating in compared to Flexeril or Soma.  Skelaxin may be more useful in patients who cannot tolerate the sedative actions of Flexeril.

Skelaxin is classified in pregnancy category C by the FDA pregnancy list of drugs. This means that it should be used with caution and only if benefits outweigh risks. Animal studies show risk and human studies not available or neither animal nor human studies done. It is unknown whether Skelaxin is excreted into breast milk, thus it is not recommended during vreatfeeding.

Skelaxin is more expensive than Flexeril.

Flexeril vs Skelaxin side effects

Can you take Flexeril and Skelaxin together?

Using Flexeril together with Skleaxin may increase the risk of side effects such as dizziness, drowsiness and difficulty with concentrating. Some patients, especially elderly may also experience impairment in thinking and judgment. Patients should avoid combination of these drugs and should limit alcohol use while being treated with these medications.

Patients should also avoid driving or operating hazardous machinery during while they are taking these drugs. However, under doctor supervision these drugs can be prescribed together during a short-term treatment of serious musculoskeletal conditions. They are in some cases prescribed off label for the treatment of fibromyalgia.

Which is stronger Flexeril or Soma?